What is ADAT and How Is It Used? 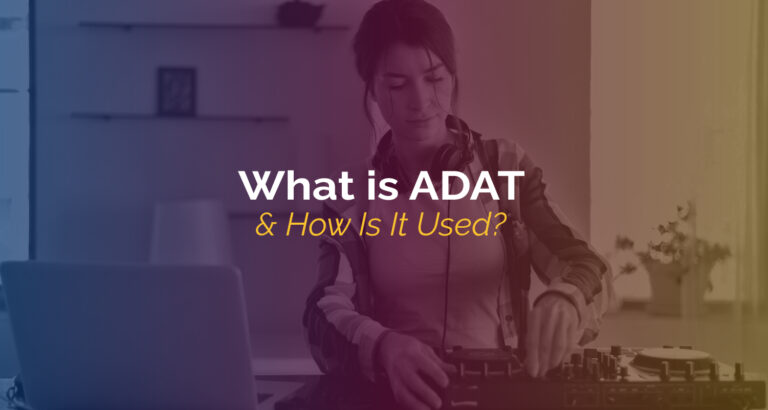 If you’ve been in the music business for a while now, you’ve probably heard the term “ADAT” thrown around when discussing audio equipment.

It is every music producer’s dream to have more output and more input channels.

However, if you’re still curious about the most commonly used functions of audio interfaces, here’s a complete guide on what is ADAT and how to use it!

One of the BEST ways to further understand something is to understand its point of origin. In this case, we’ll be delving into ADAT’s history first before focusing on its modern uses.

The main difference between analog recorders and the ADAT interface was that the latter made it possible for individuals to have extra ADAT recorders, which could copy up to 8 channels!

Up to 16 ADAT recorders could be connected with ADAT Lightpipe or ADAT cables and produce approximately 128 tracks.

Various models were then produced throughout the years. The earlier ones used the ADAT Type I format, which recorded at 16-bits:

The later ones used the Type II ADAT format and recorded at 20-bits:

Interesting trivia: The tapes recorded with Type I could still be used in Type II machines, but NOT vice versa.

How Does ADAT Work?

Now that we’ve covered the history of ADAT, we can tackle its main function: expanding your interface’s channel count.

Number of Output and Input Channels

Most audio interfaces include 2 ADAT inputs/2 ADAT outputs, which ensures up to eight channels of audio!

They can also handle additional preamps if they’re connected with optical ADAT outputs.

But how does ADAT transfer digital audio between an interface and a peripheral device?

The answer is a Toslink cable, an older digital standard invented by Toshiba in 1983. This format was adopted by Alesis and became known as the ADAT optical interface or the ADAT Lightpipe.

The Lightpipe carries 8 channels of uncompressed digital audio at 48kHz. This is roughly 48,000 samples per second!

All Lightpipe signals can transmit at 24-bit resolution and use MSB to contain information.

Just make sure to MUTE your monitors when repatching to avoid sudden loud noises!

What Is ADAT: Higher Sample Rates

This was done by using bit-splitting techniques to modify the Lightpipe format.

If you’ve noticed that some digital audio equipment often have multiple Toslink ADAT connections (and, therefore, multiple optical cables), this is because the channel count needs to be maintained.

What Is ADAT: ADAT Units

Another convenient fact about ADAT is that it allows you to add units, which helps you expand your studio setup.

Various audio interfaces have ADAT ports that make it possible to have additional inputs. Imagine that you’re planning to buy a small interface with a few mic inputs.

If you buy a unit with additional microphone preamps, a higher channel count, and an ADAT output, you could increase the number of mic inputs from 2 to 10!

Can You Connect Two ADAT Devices?

Have you ever wondered if you could connect two audio devices (i.e., an audio interface to another ADAT)?

The good news is that you CAN, and the process itself is quite simple!

The Art of Clocking

Try and imagine the frames that you see in videos and movies. These frames are also present in digital audio signals.

When connecting two or more units, you need to ensure that the frames are synched so that you don’t get any ‘clicks’ or ‘pops’. This also ensures that all of the frames will start simultaneously!

If your old interface doesn’t need a computer connected to be able to run, you can use this as an expansion. This means that the more modern interface would be the host.

Among the thousands of popular audio interfaces, a few have ADAT inputs. While these interfaces have pros and cons, note that they need to work at the same sample rate.

The Focusrite Scarlett 18i20 includes 18 inputs and 20 outputs of clear sound quality and ensures high-end details in your recordings. It also includes the following functions:

The Steinberg UR816C has multiple inputs and outputs that ensure the feasibility of multitrack recordings. It also includes the following functions:

The Apogee Ensemble has 10 analog inputs and 16 analog outputs and impressive functionality. It also includes the following functions:

The Universal Apollo Twin MKII has 2 Unison-enabled mic preamps and an efficient A/D and D/A conversion. It also includes the following functions:

To summarize, the Alesis Digital Audio Tape is MORE than just the little square connector that you can find at the back of your audio interface.

Make sure to delve further into the multiple functions of this interface so that you can use it to its FULLEST capability!