Stereo vs Mono: What’s the Difference & Which Should I Use? 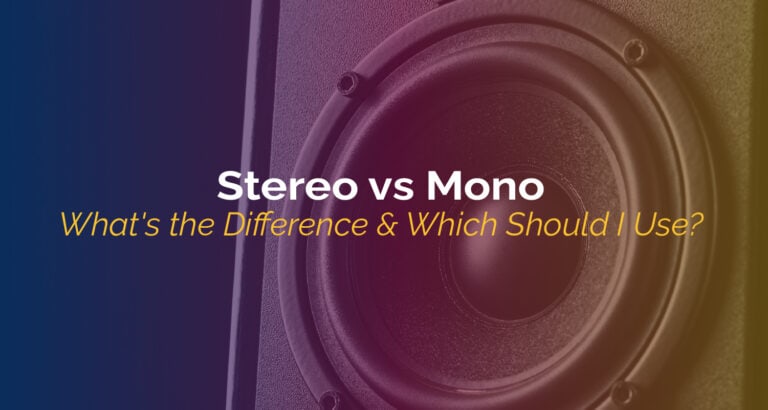 The universal language of the world is music.

It is not uncommon for a person to improve their stereo system in today’s society. Some even dedicate a whole room to listen to their favorite music.

If you are a music enthusiast looking to have a more immersive listening experience but don’t know where to start, we’ve got you covered!

Keep reading to learn more about stereo vs mono systems and which one will suit you best.

It creates an impression of hearing sound as if it were coming from different directions (similar to how we naturally perceive sound).

What does that mean?

When playing stereo audio, your left ear and right ear will hear different sounds since more than one audio channel is supplying the sound.

Think about it: When you are driving and hear a police car’s sirens or an ambulance, your left ear and right ear do not take in the same sound.

With this, you can determine which side from the two speakers the sound is coming from when playing a song.

It typically consists of left and right speakers (although some may have more than two).

Having more than a single speaker allows the creation of a phantom image (also referred to as a stereo image). This means that to you, sound does not come from just one speaker but the space between them.

The speakers are set up separately for stereo imaging, forming an equilateral triangle between:

The way you hear the sound waves coming from the stereo audio will be more natural and not painful to the ear.

In the Context of Recording

When it comes to music production, this setup is almost always used since it offers more width and depth.

Sound engineers use stereo recording techniques to capture the sounds from vocals and instruments. If you’re looking to mix a bass guitar and a number of vocals, this is your go-to setup.

During a stereo mix (using a stereo field), engineers combine a mono signal with another, allowing for a ‘wider sound.’

In contrast with audio files like voice recordings, stereo audio will consist of two waveforms.

This tells you that one audio channel signal will be sent out per speaker.

Note: Sound waves recorded in stereo mode sound best with stereo speakers. Make sure you have the right speaker and are using the right channel.

You will need two speakers in a true stereo set-up, a left speaker and a right speaker.

While it is known to be costly, you may get your hands on high-quality stereo speakers for as low as $330 on Amazon.

In contrast to stereo, mono (short for monophonic) refers to the sound recorded using only one channel. This means it makes use of one sound source.

If you were to play mono audio, you’d notice things sound more direct and as if coming from only one source because it is.

Allow us to explain why using two speakers will not change how a mono signal sounds in the next section.

How does mono sound?

When using speakers, you will notice that mono audio sounds a lot flatter than the sound from stereo recordings. This is because a mono audio recording only uses a single channel.

What does that mean?

If you were to play mono audio on one speaker or two speakers, the output would SOUND EXACTLY THE SAME on the left speaker and right speaker since the same signal is channeled through the speakers.

Audio coming from a monophonic source is louder because the sound source is just one, making you listen to all sounds, all at once. Anything coming out from the left will also play on the right speaker.

Mono recording is less expensive and can be done using basic equipment such as a single microphone and recording device.

You might have noticed that when looking between a mono and stereo version of a record, the former is more expensive. This is because it is most likely the song’s original (or master copy) version.

Monophonic equipment starts as low as $30 on Amazon.

Mono vs Stereo: the Pros and Cons

Every product has its pros and cons.

Here, we’ll break down the deal between mono vs stereo sound systems and setups.

An obvious advantage to having audio broadcast through a single channel is that you would need less equipment. This makes mono signals more budget-friendly.

There will be no need for multiple microphones or speakers.

Since there is only one sound source, it would not matter if you want to play a song on your right ear or left ear.

When using a monophonic pair of headphones or earphones, the output will be the same, and you will not miss any of the elements in the track.

Since it only uses one channel to convert a signal, a monophonic setup is more flat in output.

Coming from one sound source, your ear will catch everything in one go.

Having more than one sound source and using two channels to convert multiple signals, a listener has a more natural, closer to a human, musical experience.

It creates a more immersive atmosphere that most might prefer.

Since it is more complex, it is not advisable for low-performing equipment.

It takes up a lot of power on a device and may not be suitable for those who do heavy computer tasks like gaming.

Similar to how what is heard on both speakers are different, stereo audio, when played using earphones, will also have the same effect.

For a full experience, you’ll need to have a well-planned set-up.

What stereo audio you make out on your right ear is slightly different from the output coming from the left ear. This may cause you to miss some tones if only using one side.

So, Which One is Better for Me?

Now that we’ve given insight into stereo and mono sound, mono vs stereo, what will it be?

It is best to opt for stereo recording and a stereo system if you want a more immersive experience. Stereo audio is more natural and close to how humans perceive tones.

Use this if you have the budget, space for speakers, and a need for more dynamic output.

This is perfect for you if you are in the radio broadcasting industry, into gaming, and even if you need a hearing aid!

It is easy to record and is much easier to transmit (which is why it is common in the broadcasting industry).

When choosing between mono and stereo systems, it all boils down to the kind of sound experience you are looking for.

While mono recording and mono playback systems are more cost-efficient and do not take up much space, since they only make one audio path, they sound flat.

A stereo system allows more depth, making it the better choice if you are interested in a premium audio experience.Note: Dual mono & stereophonic are not the same.