Is a Microphone Input or Output? What You Need to Know 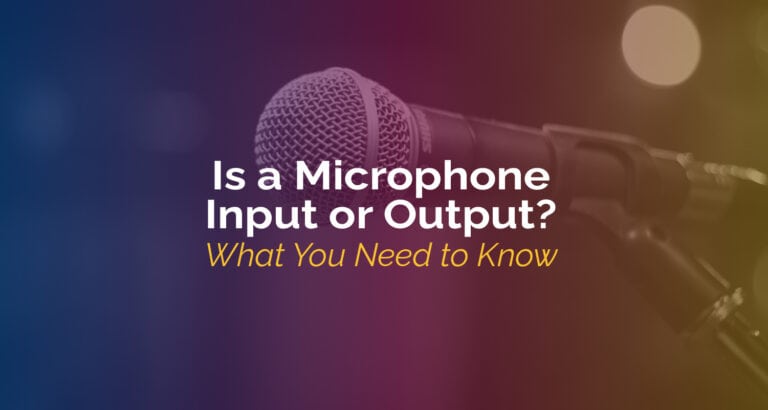 A common question people may have is: Are microphones considered input devices?

It’s normal to be confused when there are articles that show how to turn your microphones into audio output devices.

So, is a microphone input or output device?

This article will explain why microphones are input devices and NOT BOTH input and output devices.

Is A Microphone Input or Output Device?

To answer the much-debated question: “Are microphones input or output devices?” they are INPUT DEVICES!

This is because microphones send an audio signal to a computer or device but do not receive audio signals back.

It is up to the output device to convert these into digital audio data.

Generally, microphones must be connected to hardware with an analog to digital converter for the microphone signal to become digital.

What is an Input Device?

Imagine you are in a foreign country, and with you is an interpreter.

You use your native language to order food while the interpreter translates what you are trying to say and relays it to a local food vendor.

An INPUT device provides data to a computer, which allows for interaction and control.

Back then, people used punch cards to send digital data into a computer. Instructions were punched onto the card and then fed into a computer system.

It was a very MANUAL task and took time to accomplish.

Nowadays, we have many common input devices that we interact with almost daily, such as our SMARTPHONES.

Not to mention, they are easy to use!

Whether you are aware of it or not, input devices are heavily part of our lives.

In this digital age, computers and smartphones are almost always present in every household.

Some of the input devices we encounter are:

The keyboard is a primary input device that lets users input data and commands into a computer.

External keyboards can connect to desktops or laptops thru a USB cable or via Bluetooth connection.

The mouse control and the cursor navigate through a laptop or desktop.

They are often connected to the computer via a USB cable, but wireless ones are also available online and at physical computer stores.

A microphone is an input device that allows users to input audio signals into the computer.

Microphones make it possible for sound waves to travel from one point to another. They are commonly used as an audio input device for:

Most, if not all, computers have a built-in microphone input.

Different kinds of microphones cater to specific needs, which we will dive into later in this article.

A common misconception is that scanners are also output devices. This is false as it only takes IN information, making it an input device.

Scanners take an image of a physical document or image and translate it into a digital file that computers can understand.

This process is also known as analog to digital conversion. The analog signal is whatever you are scanning to turn into digital data.

Additionally, a scanner can only send information to the computer and not receive information (unlike printers).

It is commonly used when applying for an identification card and, lately, as a security feature on smartphones.

What is an Output Device?

An output device, by definition, is a piece of hardware that:

Some forms common to us are text, visuals, audio, and printed documents.

Output devices function after receiving signals from the computer. These signals include electrical audio signals from microphones and digital or analog signals.

Like input devices, we get to use output devices in our day-to-day lives.

These are the common output devices we encounter.

Your computer monitor is the most common output device.

It provides output from the computer (what you see on screen), allowing users to decide how to interact with digital data using your mouse or keyboard.

The speaker’s primary function is to play computer audio, known as output audio.

A speaker receives electrical audio signals and then converts this to the sound waves we hear.

Most computers have their own built-in speakers, while others purchase external audio equipment to greatly produce sound quality.

FUN FACT: You can turn a speaker into a microphone when you invert its signal flow! Reverse the signal flow by wiring up your speakers.

This popular output device makes a physical copy of the information sent from a laptop or desktop to its system.

The digital data that is processed is what gets printed out.

Headphones and earphones are output devices that enable us to listen to audio signals from our computer system and devices via an output jack.

These are usually used for gaming & when we want to listen to audio privately with better sound quality.

Differences Between Input and Output Devices

Think about a dedicated input device, such as a recording microphone; you’ll need an output device to process the information and display the voice recording.

The main differences between the two are:

An example of input and output devices working together is when we use a camera with a built-in microphone to record a birthday video greeting that we will upload with our laptop.

The camera will send an audio signal to the computer, which will then be translated to a human-understandable form.

You can think of input and output devices as partners in crime!

Can a Device be an Input and Output at the Same Time?

The answer is: YES!

Some devices are considered both input and output.

We already know the answer to “Are microphones input or output?” is, so how about devices that CAN be both?

A device can be both an output and input device if it can send signals, process these, & send back human-friendly signals!

How Does a Microphone Input Data Into a Computer?

How exactly do microphones work?

To simplify the process of how microphones input data into a computer:

A classic analog to digital conversion example is making a voice recording with a microphone.

When we record ourselves using a microphone, sound waves hit the diaphragm in the microphone and get converted into digital data.

What Are the Types of Microphones?

We will talk about four types of microphones:

The motion of the voice coil generates an electrical audio signal matching the picked-up sound.

This kind of microphone is durable & inexpensive. It is what is mostly used for live performances.

A condenser microphone needs to be powered by an external source, like a mixer or amplifier, to provide phantom power to the microphone.

They provide a smooth, more natural sound at higher frequencies.

External microphones like USB Mics are condenser mics most of the time.

These mics connect directly to a computer or device via USB connectivity and work immediately.

A USB mic has a built-in audio interface (known as an analog to digital converter) and can convert an analog mic signal into digital data.

NOTE: Phantom power is a DC voltage that can run a condenser microphone.

Ribbon microphones are a type of dynamic microphone.

It uses a thin electrical conducting ribbon that is placed between the poles of a magnet.

A ribbon microphone is bidirectional and does not pick up sound from the side but from the front and rear area.

In contrast to Dynamic Microphones, they have a better high frequency. Plus, they do not need external or internal power to operate.

FUN FACT: Like speakers, microphones may work as a speaker if you invert their signal flow!

A digital microphone picks up analog sound waves, processes them and digitizes the audio within the microphone.

The audio quality coming from a digital microphone is significantly better as it converts sound into a high-definition signal.

What is Mic Level?

There are four types of signal levels: a microphone level signal.

Mic level refers to the voltage level coming from a microphone when someone speaks into it.

Microphones capture sound by converting air pressure changes into an electrical audio signal and a wire.

What is a Line-Level Signal?

There are two types of line-level equipment: Consumer & Professional.

On the other hand, mixing consoles and signal-processing equipment like amplifiers fall under the Professional line level equipment.

What Are the Kinds of Audio Interfaces?

Audio interfaces take analog signals from a microphone & convert them into a digital signal. An audio interface also routes sound from a computer to headphones & speakers.

How to know if you need an audio interface?

If you are dealing with multiple microphones & equipment like speakers or amplifiers, it may be time to get an audio interface.

An adapter-style audio interface is connected via USB.

This type is great for those working with one input device.

A hub-style audio interface is also connected to a computer but contains multiple ports.

This is particularly useful if you are dealing with several pieces of equipment.

REMEMBER: Before purchasing an audio interface, check your current hardware ports and ensure that the audio interface is COMPATIBLE with your input devices.

You are ready to answer the much-debated question: “Are microphones input or output devices?” Microphones are INPUT DEVICES.

A microphone acts as a bridge between us and our device by converting mechanical wave energy (sound waves) into an electrical audio signal.

REMEMBER: They cannot receive an audio signal and only an output signal, so they are input devices!