LMMS vs FL Studio: Which DAW is Best For Music Production? 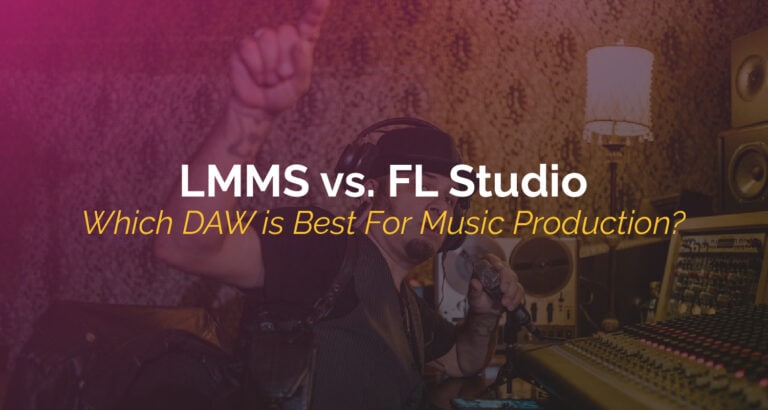 There are tons of great DAWs (Digital Audio Workstations) out there in the market – they either come completely free or at a price.

If you’re still torn between investing your hard-earned cash into a solid DAW or getting all the features of a music production platform without the need to pay, then look no further!

Which is it going to be: the LMMS vs. FL Studio? We’ll be putting them to the test and see which one will take the title for the best DAW!

First released under Linux MultiMedia Studio back in 2004, LMMS is a free, open-source platform with a strong community base.

With the LMMS software, dedicated users can create various instrument and audio effects plugins for others to download and enjoy.

At the same time, they can also become volunteer developers to refine the user experience as years go by.

What’s particularly special about LMMS is that everybody gets to collaborate through its dedicated online forum, making this DAW a great, free platform to do music production with!

LMMS is an open-source software packed with a rich library of user-contributed plugins.

You also get essential tools like the Song Editor, all enough for any average producer to explore while producing music.

The interface of the LMMS is a bit lackluster and may require you to get through the learning curve compared to other DAW platforms, but others wouldn’t mind.

The features here are also limited, less advanced, and do not even include a tool for recording audio.

But the good thing is that there is the freedom to customize whatever you want in a workspace.

LMMS is available to download on Linux, Windows and Mac OS.

It requires at least 100 MB of free disk space and 1GB of RAM to run.

There is no mobile version of LMMS so far, but with clever hacks and an intuitive mind, you could create sounds at your fingertips on your Android phone!

FL Studio was first released by Belgian developer Image-Line in 1998 under the name FruityLoops.

Since then, it has been one of the top commercial DAW software, respected by some of music’s greatest producers.

FL Studio includes a wide range of ready-to-use plugins and is more reliable when making beats with the help of its built-in sequencer.

With FL Studio, you could choose among various plugins, presets, samples, and instruments.

If there’s one thing FL Studio is best known for, it’s the clean, organized, and professional interface.

However, it may be too intimidating to first-time users.

Thankfully, FL Studio provides readily-available tutorials and other resources to help you get used to it!

FL Studio is supported by Windows and Mac OS and requires at least 2GB of free disk space, and 4GB RAM is recommended.

Meanwhile, FL Studio Mobile, the mobile version, is available to download on the App Store for iOS, Google Play for Android devices, AppGallery for Huawei phones, and Windows app devices.

Now that we’ve gotten an appetizer of what both LMMS and FL Studio look like, let’s go ahead and break down a couple of their features in more detail. This way, we can see the main differences.

The LMMS allows users to fully customize their own workspace with unlimited possibilities!

At the top left of the LMMS are shortcut icons for various editing and file tools, plus an information page.

Some tools and functions include the Song Editor sequencer, a piano roll editor, and an FX mixer.

At the top right are the master volume and pitch controls, with technical details on the tempo, time signature, and a CPU meter at the far right.

Some virtual instruments, presets, and other plugins are found along the left column.

The FL Studio interface is somewhat similar to that of the LMMS but with more detail.

A few notable features include advanced automation and effects chains, among other basics, such as a piano roll section.

All the icons are resizable and can accommodate most screen resolutions!

Aside from a computer keyboard and mouse, the LMMS and FL Studio are both compatible with a MIDI keyboard controller, drum kit and other instrument hardware for added convenience.

Since the LMMS is free, you may not exactly get as many advanced audio mixing features found in most paid DAWs.

Even a tool to record audio is absent! Bummer.

Using the LMMS in ‘performance mode’ wouldn’t be as fantastic either, unless you prefer live loop sequencing sessions.

The LMMS workspace is still pretty decent for an entry-level DAW despite lacking a few traits.

An advantage of using FL Studio is having an advanced but convenient user experience that all professional and amateur producers can get along with.

Compared to the LMMS, FL Studio has all the essential audio production tools, plus an additional Performance Mode for performing live.

However, while FL Studio has plenty of benefits, there are limitations in that the tools may not be as advanced as other DAWs.

But still, ask any average producer and expect them to say they wouldn’t mind.

If there are any similarities between the LMMS and FL Studio, one of them is they eventually become user-friendly, especially once you get past the learning curve.

Plus, all their functions and plugins come in mini-windows, which can be customized to your liking.

It’s no surprise that the LMMS is completely free to use!

However, it may be a challenge once you download and install the application.

Once LMMS is installed, you may be redirected to the Setup window, where you would have to set preferences, eventually reflecting your workstation later on.

It might be a little difficult to figure it out, but thankfully there are tutorials online that could help guide you.

As for FL Studio, they come in four different price tiers.

The Fruity Edition, costing $99, is the most entry-level version of FL studio. However, there are limitations, and you may not get the most out of it just by using this version.

Instead, you can get the Producer version at $199. It comes with basic audio editing and recording tools, various samples and instruments, plus a few native plugins.

If you want to expand the FL Studio features even further, there’s the Signature Bundle at $299 and the ultimate All Plugins Bundle at a staggering $499!

Naturally, the huge difference in prices reflects the application’s limits.

When it comes to compatibility with VST and external plugins, both the LMMS and FL Studio deliver in this field!

The only difference is how they’re being imported into the program.

In FL Studio’s case, plugins are loaded into a VST plugin folder and are ready to use within the interface, a standard practice seen in most DAWs.

With LMMS, the process is a bit longer than you would expect; you might need to take a few additional steps when importing an external plugin, as illustrated in this tutorial here.

Third-party VST plugins may need to be used in the LMMS application through the integrated VeSTige host window.

The LMMS and FL Studio both include stock plugins, most of which are fun to experiment with.

The plugins for FL Studio vary with lots of cool effects and instruments, apart from having quirky personalities, of course.

Some of its popular stock plugins include the Drumaxx, which offers authentic-sounding drum sounds; Flex, a more advanced synthesizer manipulator; and DirectWave, which can sample from existing sound files and virtual instruments.

In addition, even though FL Studio Mobile may be available on smartphones and tablets, you can also download a native plugin version into the FL Studio desktop program.

While LMMS plugins offer the same excitement from experimentation, there might be instances where it could be rough-sounding and hard to control.

Plus, the graphic interface is mostly uniform, which can often be dull to look at.

Despite these, some fun stock plugins are worth trying out, like the high-quality Serum synthesizer, GameBoy-inspired FreeBoy emulator, and the FluidSynth-based SF2Player.

FL Studio and LMMS offer decent MIDI integration into their programs, which means they are compatible with a MIDI keyboard and other MIDI-enabled hardware.

Both DAWs show no issue when it comes to connection.

However, with LMMS, configuring a MIDI device with a VST may be difficult since the controls are less mappable than FL Studio and other DAWs.

Like we said at the start of the article, there are many great DAW besides LMMS and FL Studio with exceptional quality. And we mean it!

LMMS may be a great free DAW, but if you feel like it doesn’t satisfy you enough, there are other free DAW platforms we recommend you try out, including:

If you don’t think that FL Studio is worth spending your money on, may we suggest you try out our other professional DAW picks, such as:

Nearly all samples in LMMS are licensed with the GNU GPL v2, a general public license in which users must abide by the rules.

This means that you’re allowed to change them to whatever you like, but you would still need to give credit to and retain sources from the creator.

As for royalties, all the LMMS-provided sound bites are free to use without any additional cost.

Can LMMS Be Used Professionally?

LMMS can be used as a professional DAW for market-ready music. But if you’re going for that route, you might have to be meticulous in doing so.

Since LMMS has limited tools, including the absence of the audio recording tool, you might need to use it together with other music-recording programs, like Audacity.

Despite the inclusion of better-quality plugins, the LMMS might not be a recommended choice for music and beat-making; unless the genres produced are chiptune or lo-fi.

If making sounds with high standards is your kind of vibe, it would be better to run FL Studio instead.

Where Can I Get an FL Studio Free Trial?

If you’re interested in trying FL Studio without worrying about buying, there’s a free trial available! You can check their website here for details on all the features.

FL Studio offers a time-unlimited trial with a preview equivalent to the All Plugins Edition.

However, while you can create and save music files, you can’t open them again unless you purchase any of the full versions.

After going through all the main differences, there’s no denying LMMS’ capabilities as a professional music software.

But none of its standards could ever compare to that of FL Studio, our winner pick for this review!

We cannot recommend FL Studio enough, even for the most aspiring producers.

Committing to an FL Studio bundle with engaging production tools and functions and an exceptional workspace may be challenging, but everything will be worth it.

While we hope you’re satisfied with our winning pick, it’s also okay if you don’t agree based on how much is needed to commit to it and stick instead with a top priceless DAW like LMMS.

There are many other best DAWs out there, free or paid, that offer a superior experience!

Having the right tools to create high-quality music is important, but all of this wouldn’t be possible without a DAW that’s also the same.