Line Out vs Headphone Out: Which is Better for Stereo Audio? 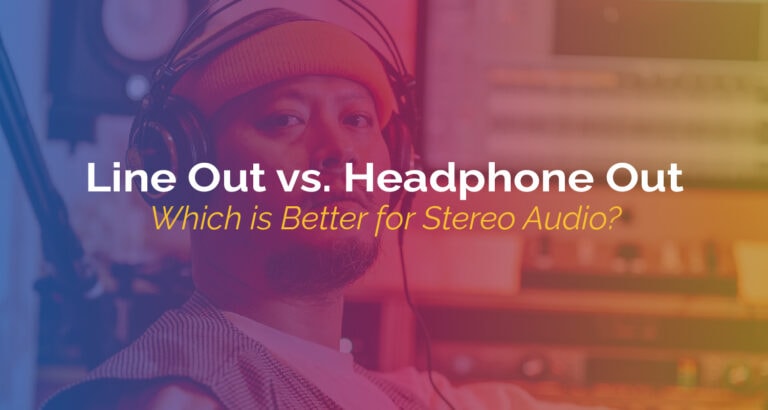 Are you torn between getting a line out vs headphone out for your studio? Are you unsure what you need and which purchase will be worth it?

You’ve come to the right place!

I’ll not only discuss their differences in detail, but I’ll also help you identify which option will suit your work best!

What is Line Out?

A line output, called sound out, is where you can plug speakers and other audio signal outputs into your computer sound card.

A line output connects it to your computer so that it can send the audio signal produced to your preferred devices.

We also use line-outs to send a line-level signal from one device to another for additional processing.

A line output emits line-level audio signals. You can consider any audio out that delivers line-level signals as a Line Out (like a mic preamp or an audio interface).

They are also made for driving loads that have high input impedance.

What is a Headphone Out?

A headphone output can power a pair of headphones with enough amplification. To be able to drive a headphone, this amplification is built-in, unlike a line output.

Like the line-outs, a headphone output is where the audio signal output from your computer is sent to your headphone.

This extra process then results in more signal power than unprocessed line-level signals.

Line Out vs Headphone Out Comparison: Which is Better?

Let’s go through them one by one!

Line-outs are not equipped with built-in amplifiers and are supposed to power an active loudspeaker, a high-powered amplifier, or anything not headphone-related.

Line outs have pure voltage output; if the preamp or any other audio output device you’re using is good quality, these output devices will need to put a buffer on the output.

They do this to drive the cables properly and give you the cleanest and best quality audio.

Headphone outputs are essentially mini power amps that output both voltage and current.

Additionally, a headphone output takes the amplification of line outs internally and routes it into a little headphone power amplifier.

They run it through some current buffers, which will allow about half a watt of output power to be delivered to your headset.

This extra stage affects the sound quality. It’s also a not-as-good choice for powering monitor speakers or anything going to amplifiers.

Why? Because headphone outputs ALREADY have a built-in amp. A line output does not, so it will work well with an external amplifier.

Meanwhile, a headphone output connected to an external amplifier will mean double amplification, which you don’t want.

Furthermore, some headphone amp products are made stronger than usual to produce a higher voltage. Thanks to this, headphone outputs produce greater power with less distortion.

WINNER: Line out wins the amplification round.

What about volume control? Volume regulation with headphones is also easy to do. On the other hand, line-outs are stuck at fixed volume.

The volume can only be regulated through the external amplifier to which you connect line-outs.

WINNER: Headphone out wins the volume regulation round.

Remember the extra step headphone outs because of their built-in headphone amplifier?

Amplified line-level signals (headphone outs) have probably made some changes on their own to the original audio.

It might have mild distortion and added some low noise and fuzziness.

Additionally, some headphone amp kinds are low quality, which can further alter the original audio signal.

Meanwhile, the audio signal from a line-level output has the PUREST output. The sound comes out very clean, clear, and unaltered!

WINNER: Line out wins this round as well.

Headphone outs normally have a much lower output impedance (up to around 500 ohms) to power the headphones.

On the other hand, a line output on different audio devices typically has a high output impedance of around 500–1000 ohms.

A line level output is generally designed to feed only high impedance loads, whereby a headphone output is optimized for much lower impedance inputs.

Line-level outputs can drive HIGH source impedance with low audio signal strength. These higher impedance loads result in a CLEARER audio sound since a line out is optimized for it.

Meanwhile, headphone outputs are designed for LOW impedance loads but can supply more power. Now, this is what allows for some audio signal distortion.

WINNER: Again, line out wins this round because it has less distortion.

We answer all of your questions here!

Can I Use the Headphone Jack on My Laptop for Music Production?

First of all, the headphone jack on your laptop is not optimized for audio quality like it is on a computer soundcard.

Also, as you already know, professional headphones are high-impedance headphones. Therefore, they need MORE voltage power than regular ones.

Most laptops are only equipped with regular power headphones with no high voltage demand.

Laptop jacks are made as cost-effective as possible, no matter how high quality you hear the sounds.

They’re only designed for listening to music, watching videos, or making zoom calls, after all.

They cannot provide enough power for your professional headphone, which will result in a lot of distortion and ruin the bass.

Plus, the distortion will be worse if you use correction software. It can also put stress on the built-in headphone amp.

Unless your laptop is equipped to power high source impedance, do NOT use your laptop for music production by connecting your headphone to its audio port.

What’s the Difference Between the Headphone Jack and Audio Jack?

An audio jack will carry the signal and allow the audio receiving device to control the volume.

Meanwhile, a headphone jack will already adjust it as the sound goes out.

Also, the audio port is universal for any audio device, while a headphone jack, as its name suggests, is specifically made for headphone outputs.

If you’re curious about the sound quality, the audio port will give you a better sound.

Can You Play Aux Through the Headphone Jack?

Yes, you can use it for an aux input.

Is it Possible to Use a Headphone Out as Line Out?

You will have no problems using headphone outputs as line outputs in a pinch.

If you try not to crank up the volume too much, the audio sound will only have reasonable distortion.

Can You Plug Headphones into Line Out?

You can plug headphones into line outputs, but you might not hear anything from them because the line-level audio signals are not strong enough to drive headphones.

Line-outs do not offer the necessary amplification to drive headphones to function.

Sometimes, you might be able to hear a faint sound from your headphones, but you’ll probably get a reduced bass sound even if you do.

What Does Headphone Line Out Mean?

A headphone line out refers to headphone outputs that can also function as a good substitute for line outs.

It is like a cross between headphone outputs and line-outs!

They are equipped with more power to drive headphones, external speakers, amplifiers, and other outputs.

A headphone line output can drive headphones as well as line-level output loads.

But if you get stuck in a situation where you need your headphone outs to work as line-outs, you won’t have to deal with the slightly degraded quality.

Is Line Out the Same as Audio Out?

The terms line out and audio out are used interchangeably to refer to the same out plug.

Does Headphone Go in Line-In or Line Out?

Your headphone goes in the line out.

If you’re using it with a mic, the mic goes into the line.

When you get confused, remember that line in is used to record (such as mics and instruments), while line out is used to listen (like headphones or a speaker).

Can I Connect the Headphone Out to the Aux Input?

Most audio sources can be accepted using auxiliary input connections.

A headphone out can still function flawlessly with an aux input even though a headphone out isn’t technically an aux out (nor is a line out).

Can A Headphone Jack Be Used As Line In?

Yes, but the audio outpower is usually insufficient to drive the headphones.

So if you want to source your audio from your headphones, you should also get a stereo amplifier to control the audio.

Final Verdict: Which One Should You Use?

It mostly depends on your audio needs and what devices you will be using.

Choose the Headphone Outs If…

Choose the Line Outs If…

However, if you want the best of both worlds (headphones and all other output devices) and are willing to compromise the line-out quality, you might also want to explore a headphone line-out option.

And that’s all we have for your two audio-out options!

To summarize, line-level signals can be sent from one audio device to another using the Line Output audio connector. It is also for a line level-out signal.

Meanwhile, headphone out is an audio connector that transmits a boosted line-level signal intended for driving headphones.

Choosing will depend on what kind of outs you are using or will use in the future for your music production.

We hope this article has been of help in your decision-making!