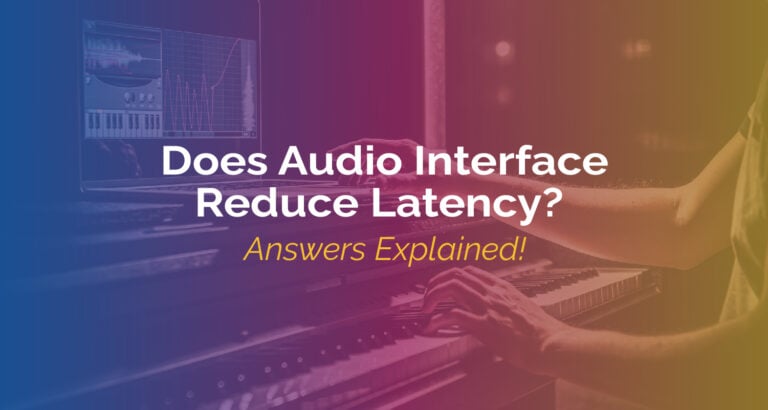 Tired of dealing with audio latency issues when performing, recording, or listening to music? Experts may have mentioned a low latency audio interface.

An integral part of a digital recording setup is audio interfaces. An audio interface is essential to provide better sound quality, whether you’re a musician, mixing engineer, or podcaster.

Several things can contribute to lagging. Fortunately, there are several high-end audio interfaces available that can reduce latency.

This thorough guide will examine how an audio interface can lower latency in your audio recording.

An audio interface is pretty straightforward and improves sound quality. It streamlines your recording setup by lowering latency and organizing your recording gear.

The following is a list of the ways an audio interface reduces latency:

As you can see, one of the best methods to prevent latency is using an audio interface.

The reduction is based on quality. Therefore a high-end audio interface will do much more effectively than one device.

What Is Audio Latency?

The time between when digital audio is played and when it is heard is known as audio latency.

The latency time would be between pressing a key and seeing the sound playback over your monitors or headphones if you were to play a chord on a MIDI keyboard.

A digital signal from the computer is transformed into an electrical voltage using a digital to analog converter (DAC), which can then be utilized for electrical power devices.

In most cases, adding another component to the conversion can add latency.

The analog signal goes to the audio interface via an XLR cable. The digital signal is transmitted via USB to your computer and recorded by your DAW (e.g., Logic Pro X, Pro Tools, etc.).

Everyone who owns a laptop and an audio interface may now record music.

The good news is that many audio interfaces are available on the market that process audio rapidly and efficiently, reducing latency and improving the recording environment.

Depending on the type, an audio interface reduces latency by buffering the audio signals.

Interfaces are of varying quality, just like any other gear. It is unlikely that a cheap audio interface will eliminate latency, but it may help to reduce it marginally.

A computer’s sound drivers may not be of a caliber that is ideal for music production. Even if they are somewhat capable, relying on the inbuilt drivers will probably cause latency.

Compared to the default, built-in drivers in a laptop or computer, the components used to make them are superior.

You essentially displace the onboard sound drivers when you use an audio interface as your DAW’s input and output device.

If you’re using a good audio interface, any latency problems should disappear as soon as the sound drivers are off.

It’s crucial to stress that not all audio interfaces are created equal before you run out and buy the first one you come across.

It can be annoying to deal with a constant lag in the recorded audio. Lag time can lead to poor audio quality.

Most delay problems are brought on by cables, computers, and improper DAW management.

Contrary to common opinion, there is very little chance that your speakers or headphones are causing latency or buffering issues.

After the section that deals with conversions, these devices are connected.

Although audio interfaces can boost production quality, they are not perfect. Misusing an audio interface can cause more significant latency than you did before.

Fortunately, we’ve put together a four-step procedure to assist your interface work at its best and eliminate latency. What you ought to do is:

1) Verify That All of the Appropriate Cables Are Being Used

A USB cable may fit into some USB 2.0 ports, but it doesn’t necessarily imply it’s the best option. Inappropriate cable use might cause delays and slow down the conversion process.

2) For Updates, Check the Drivers on Your PC

When you use proper equipment, many computers need an upgrade. If you’re having compatibility issues, check the system for driver updates.

Mac users usually don’t have this issue with the MacBook Pro, as was previously indicated.

3) The Buffering on Your Digital Audio Workstation Should Be Adjusted

To reduce recording delay, increase the buffer size in your DAW settings. Buffer sizes, along with sample rate, impact the performance in general.

Although you can reduce latency immediately by plugging in your interface, there are a few Digital Audio Workstation settings you can change to reduce latency.

Adapters cause noticeable delays. We advise spending money on the proper cables for every audio interface and computer port because they are not worth the convenience they offer.

The frequently asked questions below can help you learn more about Audio interfaces.

What Is Acceptable Audio Latency?

Delay is essentially impossible to eradicate. Mild latency shouldn’t have a significant influence on recording or playback. The desired latency is between 8 and 12 ms.

Although faster RAM is more advantageous, reducing RAM latency increases performance. However, it would be best to balance the CAS latency and frequency.

Generally speaking, the best RAM has zero latency and a higher frequency.

Although this function won’t speed up audio playback, it will let you hear the audio you’ve captured in real time without using the processor in your computer.

What Sample Rate Should My Audio Interface Be?

44.1 kHz is the ideal sample rate for most music applications. When making music or other audio for video, 48 kHz is commonly used.

Although higher sample rates have advantages for professional music and production work, many professionals work at 44.1 kHz.

Before you run out and buy the first audio interface you come across, it’s vital to note that not all interfaces are made equal.

Remember that low latency audio interfaces of any quality are nearly always preferable to a computer’s built-in sound driver.

Consider investing in a decent audio interface if you’re a podcaster or musician experiencing latency problems to improve the caliber of your output and accelerate your process.

Since these devices are designed for the crystal-clear recording process, audiophiles, podcasters, musicians, and others cannot live without them.