Is It Necessary to Burn In Headphones? Let’s Find Out! 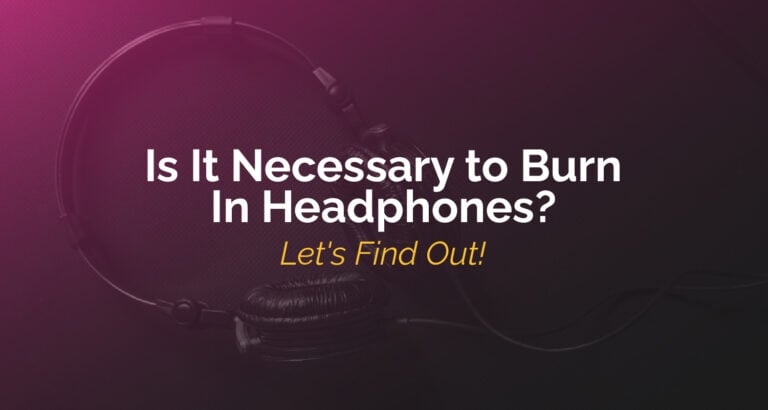 What do you do once you get a new pair of headphones?

If you’re like the majority, we’re pretty sure you unwrap your new pair of headphones straight out of the box with childlike excitement.

But some enthusiasts believe you need to do some BURN-IN first to get that high-grade music play experience and everything in between.

You’re probably wondering how to get the best sound quality from your own headphones. You might even wonder if the headphone burn-in is real or just a colossal waste of time.

So, what’s the truth? Keep on reading!

What is Headphone Burn-In?

Burning in your headphones does not mean literally putting them on fire. That would be a disaster!

To understand the concept better, consider an old automobile sitting idle for a long time.

Most people would agree that the best method to keep its engine in tiptop shape is to let it run for a few minutes. This keeps it working, despite not being on the road for a long time.

The same goes with your headphones! Before you start using a new one, you need to “break it in.”

In this case, breaking it in essentially means playing audio with varying frequencies over long periods of time to see if the sound quality gets better afterward.

Then you can say your headphones have been burned-in.

How Long is the Burn-In Time?

Audiophiles don’t have a definite answer to this.

Some would suggest going for 4 hours only or an insane extended period of 400 hours!

To be honest, there’s no definite measurable way to know if your device was burned correctly. It’s for your ears to decide whether your headphones sound like Nirvana.

But we recommend experimenting with the number of hours to see any difference in audio.

TIP: Audiophiles claim that one sure way of burning in your headphones is by playing hours of audio that push all the frequencies.

While there are true believers that burn-in headphones make a big difference when listening to music tracks, others say it has become a tribal knowledge used to confuse buyers.

So does burning in your headphone really make a sonic difference?

Let’s find out in the next few sections!

To fully understand headphone burn-in, you must first know how headphones produce sound.

The audio on your device did not appear anywhere. Specific headphone components work together to give you a better sound experience!

How Do Headphones Work?

Before discussing how to do a headphone burn-in, let’s check out what a headset does.

Headphones are considered speakers. And contrary to popular opinion, they do not produce sounds but rather reproduce them.

How does this happen?

When you press “play,” data is sent to your headphones, where it is translated into electrical impulses.

These impulses are then converted into sound waves that your ears can detect from your speakers, and your brain can interpret as audible sound.

The speaker has two crucial components that help make this possible:

The idea why new headphones require some burn-in is because it comes with a stiff diaphragm, voice coil, and magnet.

Now, let’s get into the million-dollar question: Is headphone burn-in true?

Well, the answer would be a yes and no.

Hardcore opponents of the practice argue that headphone burn-in is a waste of time. But, despite the opposition, there are many applications out there that believe it’s effective.

To fully tell if burning in headphones works without confirmation bias, here are three unbiased methods where you can gather objective data on testing headphones.

This is a test that alternates between two sets of test headphones.

By switching between the two headsets, you can tell which one has been broken in for a longer time. This subjective test substitutes Tyll’s experience with measured frequency charts.

The technique may be iffy (especially if you’re someone who’s into quantifiable evidence), but the results are still striking nonetheless.

Moreover, since the process is too simple, you can just listen and do your own tests at home.

Oluv tested burn-in on a set of in-ear monitors (IEMs) by putting them through 60 hours of pink noise.

His conclusion: To burn in your headphones does not mean you’ll get a better audio experience.

According to him, there were subtle differences in the audio after three days of burn-in, but it’s small enough bordering on insignificant.

To ensure the process is transparent for everyone, he even cited his audio measurements as proof.

This is probably one of the most extended tests in any pair of headphones. The RTINGS burn-in time lasts 120 hours—yep, you heard that right.

In this experiment, four brand new headphones from different brands and varying transducers played for 120 hours.

To associate the changes in sound with the break-in effect, the difference must be something the human ear can hear.

At the end of the test, they found that although there were alterations in the frequency response measured, it did not produce any significant difference.

Moreover, the changes were way smaller than the normal fluctuations in frequency response because of the change in the position of headphones between re-seats.

So, Does Breaking In Your Headphones Mean Enjoying a Better Vibe?

Unfortunately, all the tests show quantifiable evidence DEBUNKING any significant difference in audio when you burn in your headphone.

However, despite the findings, we must not forget that the tests have their own limitations.

Some experts even believe that wearing eyeglasses might influence the sound output.

Sure, there are a lot of opinions on whether burning in is great or just a wasteful idea.

But, at the end of the day, it’s only when you’ve tried it yourself that you get to decide if there’s a difference or not.

Are you interested in burning-in your headphones? Check out what items you should prepare first!

How Do You Burn In Headphone

So what should you do before the burn-in process?

Another thing you have to prepare before a headphones burn-in is to pick from a wide array of music.

Fortunately, there are now burn-in apps available for Android or iOS to save time!

You can also go for desktop or mac audio applications to repeat some white and pink noise with your computer’s music files.

Burning In Headphones: A Step-by-Step Guide

Now that we’re done discussing what to prepare, let’s go to the good part.

How do we start a headphone burn-in? Here is a quick step-by-step guide to help you get started!

Make sure you have all necessary equipment, including looping tracks, pink noise, and white noise files.

Use an app or program to loop them all together in 4-hour intervals. Start with continuous white noise, then pink noise, and eventually music recordings in each part.

Place the headphone in a location where they won’t fall, or it’ll surely irritate you.

Connect the headphones to your computer or smartphone using the same application you used to loop the music.

Every day, listen to the sound mix for up to 4 hours. It’s necessary to provide enough time for your headphones to burn in.

Stop after you’ve reached the greatest sound quality that suits your needs.

You now have burn-in headphones!

How Do Other Factors Affect Your Listening Experience?

Whether a headphone burn-in really affects your listening experience is still up for debate.

Some may ask, “If the improvements I am hearing on my headphones are not burn-in, what is it?”

One assumption is that a series of tiny improvements build up to a significant improvement in hearing quality.

Additionally, as you grow more familiar with the headphones, your perception of their soundstage and tuning is likely to shift.

Alternatively, if you’ve upgraded considerably, you’ll notice a considerable difference between your old and new headphones.

And that’s the end of our guide!

Some believe that headphone burn-in is effective, while others argue it is pointless.

But rather than just second-guessing whether it’s real or not, we suggest diving all in and trying the matter on your own with your headphone.

At the end of the day, you will never know until you decide to try it for yourself! It’s entirely up to you to determine whether headphone burn-in works or not.