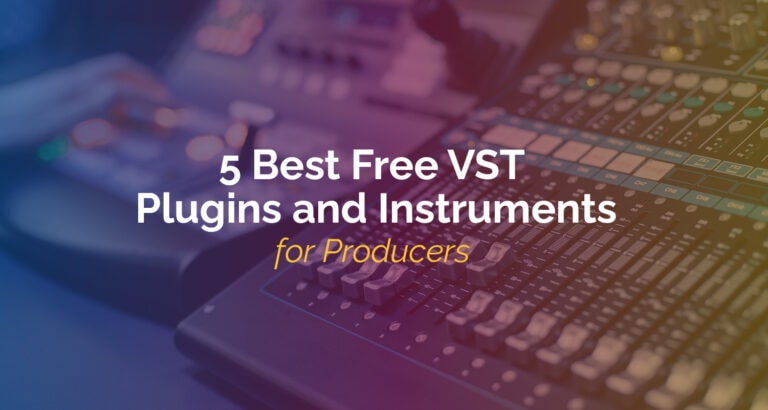 So, you’ve done your research, and picked up a new MIDI controller and digital audio workstation (DAW) software for your arsenal.

But later on you realize that you’ll need access to loads of content and tools with VSTs (Virtual Studio Technology).

Now that your pocket money’s gone, it’s time to explore a place you shouldn’t overlook: The glorious world of free VST plugins and instruments.

My hand-picked selection of the 5 best free VST plugins aims to showcase my TOP RECOMMENDATIONS in categories ranging from the best sample-based instruments to the most versatile mixing tool.

While these plugins are certainly a great bang for the buck (hey, they’re free!), they are also well-proven in their specific field and offer an INSANE amount of quality for FREE software.

It’s mind-blowing how many free VST plugins and instruments are out there on the web these days, but like all things free, not everything is created equal!

With such a wealth of options, it’s more than fair to say that going through them will take considerable amount of time.

But with a little research, it should be relatively EASY to find the ones that tickle your creativity.

And that’s the fun part here — among these, you can find otherworldly concepts and designs that just aren’t available anywhere else but might suit your creative flow perfectly!

There are a few downsides, even to some of the best free VST plugins and instruments.

One of them being typically fairly limited with features.

Bear in mind that many of them simply offer you a way in, while the paid version will give you access to FULL FEATURES and support from the developer.

Another downside can be the plugin performance or code optimization, which is often overlooked or not completed in the free version.

Some popular “research-ware” plugins, such as U-He Repro-5, consume a considerably high amount of CPU time to calculate digital representations of the original hardware components.

While these plugins might sound absolutely stunning, it means you can run only a few of them before maxing out your computer’s CPU or memory.

For some plugins, the lack of development time has also simply made older plugins, which are UNUSABLE on recent computers.

While this is unfortunate for the free plugin community, these developers might have included these great concepts in their more recent work.

Also, in the Land of the Free, the looks (or user experience) are not always top-notch, but even the ugliest design will still do the job if you’re willing to accept these minor shortcomings.

There were times when some of these plugins were REAL HARDWARE sitting in studio racks and desks. It’s really no surprise to see these concepts being recreated in digital form.

They were the go-to tools of their time and proven concepts that still earn their place in our modern software world.

Software recreations have become so powerful recently that the reason to own old hardware has become questionable.

Plugins generally require no maintenance, have no performance issues or functional limitations, and include ADVANTAGES that can only be offered in an integrated software environment.

Many modern plugins can also perform impossible tasks in a single hardware unit.

The hybrid approach to combining yesteryears concepts with the latest cutting-edge technology is also very successful and can be witnessed in various plugins such as Waves H-Delay or U-He Diva.

One important rule of thumb to follow with free plugins is the rule of upgrades.

Seeing that a developer offers a “big brother” version of the free plugin is usually a sign of active development.

If a plugin is inactive with development for extended periods of time, it might become OBSOLETE and INCOMPATIBLE with newer DAW or OS versions.

Essentially, the best free VST plugin of choice should have an upgrade path available to get the latest version, full features, and support offered by the developer.

My hand-picked selection of 5 Best Free VST plugins and instruments all feature an upgrade path and support for the paid version.

Native Instruments have been around for a long time, since 1996 to be exact. It’s very well-known and respected in the industry, especially for their Komplete lineup of software instruments and VST effects.

Needless to say, their selection of free VST instruments is a GREAT CHOICE to include in any music producer’s sonic arsenal.

Reaktor 6 Player is a limited version of their modular synthesis-based audio devices environment, which allows you to create, patch, and program a wide variety of unique and some of the BEST FREE VST instruments and effects.

Reaktor Player is free, which means the Player version contains some limitations.

You can only load ensembles specifically built for Reaktor Player, and there are no deep editing features available.

Loading an ensemble designed for Reaktor 6 will show a demo time limitation counter on the screen.

Reaktor Player will still be able to run an impressive set of free or commercial instruments and effects, and the full version even comes with a modular synthesis ensemble called Blocks Wired and a modal synth/effect Mikro Prism.

The full Reaktor 6 is a giant leap into the modular DSP rabbit hole.

Itcomes with over 70 virtual instruments and effects, thousands of sounds, and the free user community gives access to a further 4000.

The Reaktor Player is a GREAT START for anyone looking to find unique sounds and expandability through compatible add-ons.

DiscoDSP OB-Xd is a take on the polyphonic Oberheim OB-X analog synthesizer.

It aims to take some original features further than the original product, which was considered very limited in some key areas.

The original Oberheim OB-X was released in 1979 and was available in 4, 6, or 8 voice configurations.

OB-X was massively popular because of its lush sounds comparable to Sequential Circuits Prophet 5 but at a much more REASONABLE PRICE.

It included an SEM filter design giving it a “pure” Oberheim sound.

But the biggest aspect of OB-Xd is its rich and distinctively Oberheim sound quality that closely resembles the original.

Finding a convincing Oberheim emulation is a big thing, but having this FOR FREE inside your DAW is a no-brainer!

They all have massive amounts of commercial and free sound libraries available for them.

But the free selection is rarely top-notch, mainly because of unthoughtful implementation or simply lack of depth with the provided sample content.

Their philosophy is to create functional virtual instruments that allow musicians to focus on creativity and productivity rather than technology.

The free Ample Sound AGML II (Ample Guitar M Lite II) is based on the Martin D-41 Dreadnought acoustic guitar, which is considered a remarkably balanced guitar and a perfect fit for the accomplished player who has a modest budget.

The instrument engine utilizes a rhombic sampling structure to separate sample cycles for each note and velocity layer, creating a very realistic-sounding instrument.

Everything from stroke noise to fret sound and resonance is adjustable.

The biggest winning feature here has to be the Strummer engine which mimics the player’s ability to play the virtual instrument as a real guitarist would play it.

It is a HIGHLY ADJUSTABLE tool that makes the guitar track blend in as convincingly as a real recorded instrument would.

The Lite version doesn’t include full strumming and various other articulations but stands out as an impressive free instrument that leaves you hungry for more.

German developer Urs Heckmann (and his plugin house, U-He) has been quite successful with instrument plugins that model the characteristics of original hardware components through industrial modeling.

This guarantees a very convincing-sounding software emulation through mathematical calculation.

But it doesn’t stop there!

Carefully crafted user interfaces are bliss to use, and U-He plugins have been widely adopted in the industry for a good reason.

U-He Protoverb is an interesting concept that is based on the idea of a room simulator.

But this includes resonance characteristics of a modeled space, which is many times considered undesirable.

Protoverb, on the other hand, creates an image of space using multiple delays in networked, parallel, or serial configuration, effectively modeling as many room resonances as possible through mathematical calculation instead of avoiding them.

As a result, the reverb plugin doesn’t need any modulation or coloring options. It tends to produce a very natural-sounding space but occasionally needs a lot of tweaking to make it sound just right.

This tweaking process can be quite laborious and includes a lot of experimentation with the settings, so U-He and his team decided to hand this great plugin for all of us to use as free “research ware.”

It’s basically a massive data-mining project which enables the developer to collect the best of the best-sounding results before finishing the final plugin version as a commercially available product.

Tokyo Dawn Records (TDR) is a Munich-based record label that has slowly formed from an eclectic, jazzy, and funky label into a professional studio tools house.

Tokyo Dawn Labs produces a number of high-quality plugin effects that are surprisingly AFFORDABLE and USABLE.

TDR Nova is a parallel dynamic equalizer. This might not say much to the less experienced users out there, so let’s open this up a little bit.

At its most basic, TDR Nova is an EQ with the ability to add compression to any of its individual frequency bands.

Nova can therefore act as a parametric EQ, a single band compressor, a dynamic EQ, de-esser, and various other things that could be typically achieved with a combination of plugins costing HUNDREDS OF DOLLARS.

TDR Nova is available with a free edition that gives four bands of operation and HP/LP filters with 3 adjustable slopes, among other features.

Tokyo Dawn Records stands out, especially with their free offering — their plugin versions that are absolutely FREE are highly advanced, look great, and could easily challenge any paid plugin with similar features.

TDR Nova is a Swiss Army Knife of processors and should find its place in anyone’s setup.

All in all, the world of the best free VST plugins is a magical wonderland where you could lose yourself for days.

This is both good and bad, but the most important lesson to learn with the best free VST plugins is what to expect from the commercial plugins.

Sometimes, the free version can do the job just as well, leaving you MORE pocket money to invest elsewhere.

But the lack of support or development of VST plugins can be dangerous and should not be overlooked, especially when working on commercial projects.