How to Become a Music Producer: Hip Hop and DJ Tips 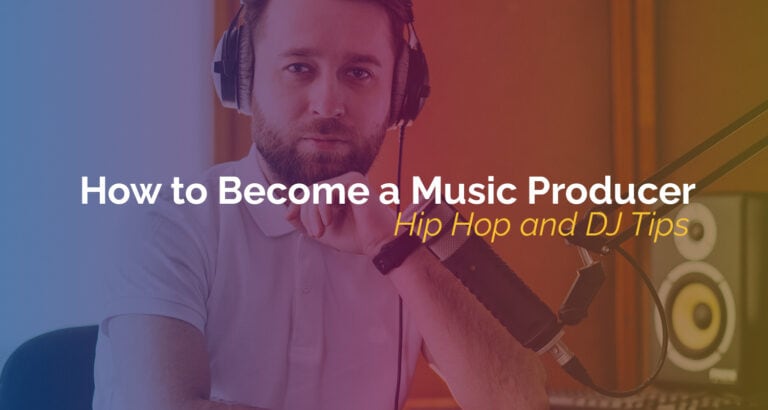 Want to know how to become a music producer? Did you ever dream about turning your hobby into a dream career path?

Every great producer in the music industry started from the bottom, making beats and creating tracks with makeshift studio tools before releasing tracks. Whether it’s with a MIDI Controller or with real instruments, you have to start somewhere.

Producing music typically takes years of learning and practice. Our article will explain how to become a music producer in a few simple steps so that you can create music in no time!

What is a Music Producer?

Music producers or record producers write music and arrange, produce, and record songs, either for themselves or for other artists in the music industry.

The term music producer had changed a lot from the early days of recorded music when they were mainly considered project managers.

As music producers, they do general music production tasks in the studio. These include writing, arranging, tracking, mixing, mastering, and sometimes even marketing-related tasks.

This big change is closely related to the changes in the music industry. Music-related technology has become significantly cheaper, more accessible, and easily distributable through the internet.

Anyone can set up a studio in their bedroom (ever heard the term bedroom producer?), produce high-quality music, and publish the music digitally all on their own.

In a more professional context, there are two types of music producers.

The more common type of the two are in-house producers. They come included in a studio rental fee and they get credited in a song’s copyrights. It’s mainly for their involvement in the entire process.

Studios might use producers as a way to get more people to use their services.

The second producer type is an independent producer. He may have gained a desirable reputation in the industry and would be directly hired by a band or artist.

In general, many music producers have to be comfortable working with both technical and creative aspects of music production. These aspects require them to be flexible enough to work on multiple projects at the same time.

What is Music Production?

What comes out from the entire production process is the music itself. But how do we get there?

Below are the most basic steps of the full process:

Typically, a music producer starts out as a freelancer. He may also double as a musician. And it usually works that way because you must know all about music to produce music.

Creating the best possible outcome from readily available tools is what music production is about. It means that creativity is one of the most valued features of a music producer.

Creative ability is key when writing out a complete song. It will help form a simple demo and also speed up crafting various versions of the track.

Music producers sometimes also act as a composer, arrangers, or musicians to mentor their artists in the creative process.

Although recording, mixing, and mastering are considered to be mostly technical tasks, this technical side of music production needs a creative mind, too. There are no limits to what the machines can do, but it requires a lot of creativity to make them sound perfect.

Playing an instrument is an advantage, especially when working with musicians. The ability to read sheet music or have basic knowledge of music theory is also a plus.

But don’t worry. Because even just a basic level of playing skill can already make a music producer better equipped to help their artists.

The music producer also needs to be a little bit of a gearhead. An interest in music technology and the ability to work with studio hardware and software is essential.

Let’s face it: Most of the new music out there is produced mostly in the box, and it will really help if you’re with computers and other new software.

Being able to solve technical issues quickly is important, especially when working in a recording facility. It’ll make your experience with your digital audio workstation much smoother as well.

You also need to have great people skills, be able to budget, plan rehearsals, negotiate studio rates, and do various other unmentioned tasks.

Who Do Music Producers Work With?

Although sitting in a studio can sometimes be lonely, there are still a lot of people that surround music producers daily. These include recording artists, recording engineers, session singers, session musicians, and many others.

All of the actual work can happen in a traditional studio setting or online through services like Splice and Vocalizr. They can also be done through live-session services like Steinberg’s VST Connect Pro.

Musicians and producers can now also collaborate on the same project inside Ableton Live using the Ableton Link technology, which works when you’re connected to the same local network.

How to Get Started in the Industry

There is no single right answer on what it takes to become a music producer.

Some study endless hours on their own, while others end up working in a recording studio only to find themselves growing more responsible for bigger project roles.

In today’s world, where information is available to anyone, one could even learn the craft of producing music just by watching online tutorials.

But one thing’s for sure: Becoming a music producer needs a lot more dedication than other careers.

In the end, only a selected few can be successful in their career. Endless others will end up working other careers just to keep the dream alive.

Then, there are others who simply quit or use their talent elsewhere.

Ask any producer and they will tell you that learning the craft and making your way in will surely take many years.

There are many producers and musicians out there who didn’t need to complete college and schooling to become successful.

You might already know that Jay-Z never attended college and that Trent Reznor was a college dropout. Even Quincy Jones, who initially attended Berklee College of Music, never ended up graduating.

This simply shows that although the academic route is possible, it’s not always the right path for everyone.

That being said, choosing a school that focuses on sound-related subjects, such as media and communication, sound for picture, live sound, sound engineering, etc., will give you great insight into working with sound.

One unspoken advantage of going to school is you get to be part of a tightly-knit group of people who share the same passion, goals, and dreams as you.

Often, the direction of a career is found during the years of studying. That’s why the value of gained confidence in the field should not be underestimated.

There are also a diverse range of options if you’re serious about learning the craft but still need to be time-flexible.

Berklee College of Music has an online program that offers both undergraduate and graduate degrees. These include classes on how to use music production programs and software.

Learning about producing music doesn’t always mean that you have to aim for a music production degree.

Dubspot, for example, focuses on electronic music production and DJing. And then class or course-based learning platforms such as Udemy and Creativelive offer more specific courses that range from software tools, creative processes, and digital audio environments.

Others focus on full-length recording techniques, individual plug-ins and give general insight on working in various roles in the music business and industry.

The bottomline, though, is that: The one aspect of music production that you cannot get from school is experience.

Make the hours of learning count. Because in the end, it matters whether or not you gained anything new or not.

How Can I Get a Job in the Music Business?

Production or engineering jobs are not the easiest to find, but working in a recording studio is a great way to improve your skills and gain confidence in becoming a music producer.

Work in a Studio

Get a job in a professional studio space that focuses on producing the music that you’d love to produce music yourself.

The reasoning behind this is simple: You will meet people who already do your dream job and they will come with the clients who could end up as your future customers.

A studio is also one of the few places where you can learn directly from the professionals. You can simply watch as professional producers work on their mixes.

You can ask questions after the session in the coffee room. That way, you’ll learn a lot about their workflow, production tricks, and how they manage their projects.

This is also the best place to learn how sound engineers, composers, arrangers, studio musicians, programmers, and performers work.

You need to be constantly awake, show interest, and be around to help even in the late hours. It might sound tiring, but it will be absolutely worth it.

When you’ve proven your worth, you might get an opportunity to help out with the sessions and get hands-on experience doing the actual work as well.

Any studio owner will appreciate a capable pair of hands to help out, and clients will eventually notice you too.

You’ll get to connect with the people and join a community that loves exactly the same style of music you love.

All Produced Music Must Be Heard!

Any kind of music needs a platform for sharing it with the public like Airbit and Beatstars.

Some music producers like to create multiple versions of their music and then sell them as library music or production music for movies, advertisements, podcasts, and live streams.

This is what we call music licensing on a digital platform.

Then, there is the traditional work of record labels. They distribute the final tracks to digital music stores like Beatport, Apple Music, Spotify or Tidal.

Because of the digital nature of all of the above-mentioned, it’s not uncommon for music producers to have their own record label. It’s to help them manage the whole creative product lifecycle from start to finish.

It’s easy to see that there is no single right route to becoming a music producer.

As the music industry continues to evolve and restructure itself in the digital world, the role of the producer is continuously expanding and changing. It’s becoming more difficult to clearly describe what the job of a music producer is.

But one thing is certain: Music production is still a valued creative job that combines creativity and technical ability in a unique way. It requires a certain spark within an individual to pursue music production as a career.

Whether a producer is fascinated with making music for movies, concerts, albums, or art events, a certain level of skill and insight into the art of music production will be important.

A big heart that is truly passionate about music is more likely to succeed.