Audio Interface for USB Mic: Do You Need One? 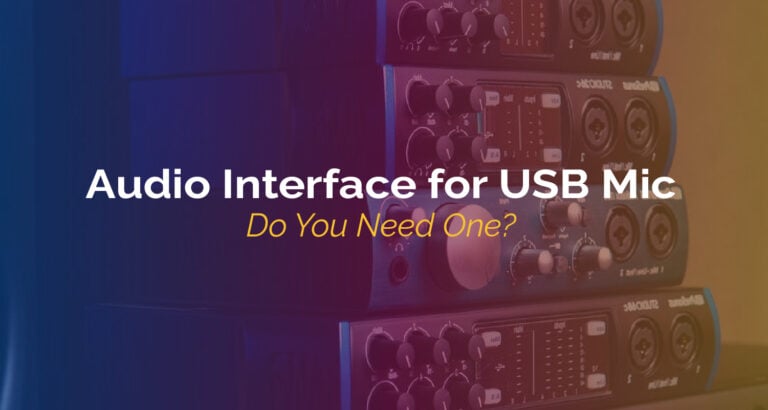 We all want that pristine audio quality that audio interfaces produce, right?

But if you have a mic at home but need an upgrade on the audio quality, you might be thinking, “Can I use an audio interface with a USB mic?”

Do You Need an Audio Interface With a USB Mic?

The short answer is no.

Let us explain why.

The USB microphone already has an analog-to-digital converter, which can be likened to its own built-in AI.

Moreover, these mics are almost always used in standalone work, such as recording directly to a computer.

This type of mic can be plugged directly into a computer, instantly converting the analog audio signals to a digital signal that a computer can understand.

On the other hand, an audio interface works best with XLR mics as it has multiple ports that can be used simultaneously.

How Do You Use an USB Audio Interface and a USB Mic at the Same Time?

The general answer is that you CAN’T use an audio interface and a USB mic at the same time.

The thing is, audio interfaces accept inputs from analog and digital audio sources. This includes the following:

Notice that it does not include USB microphones.

That’s because the connectors of XLR microphones are different than USB mics, which makes the former more suitable.

Another reason why a USB mic doesn’t work well with an audio interface is that a normal computer can also accept and process one interface at a time.

Since we mentioned that this type of mic functions as its own interface, plugging both might confuse your system.

However, there is a recent development wherein you can BOTH use USB microphones with an audio interface.

Let us discuss this in detail.

Of course, there are always exceptions to the general rule.

This recent development from Apple combines multiple inputs and outputs from multiple devices and transforms them into a single device in an application.

How cool is that, right?

However, the main requirement is that your laptop or computer run on macOS, or this Aggregate Device will not work.

You will need to use applications such as Logic Pro, GarageBand, MainStage, and other Core Audio-compliant applications.

If you are using a macOS and you need an audio interface to improve the quality of your USB mic, feel free to learn how to use this method here.

USB Microphone Vs. Audio Interface: Which Is Better?

There are so many different factors that make one better than the other. But, the main driving force between the two is the needs of the user.

Let us discuss which is better in the following subsections. Let’s dive right in!

There is no doubt that an audio interface produces a clearer and more accurate audio quality than a standalone USB microphone.

An audio interface has a higher sound quality than USB microphones.

Let us explain how this works.

An audio interface is designed to take analog audio input from a microphone – whether that is a condenser, an XLR mic, or other types of mic.

After the audio input is received by the audio interface, it converts what it receives into a signal that a computer recognizes.

This signal is called DIGITAL AUDIO.

When it comes to USB mics, the microphone tries hard to imitate the input to form the same output, but its capacity falls short.

However, an audio interface has the ability to mirror the analog audio from a microphone and turn it into a professional-quality digital sound.

Obviously, an audio interface can accommodate MORE inputs and output.

This means that if you are receiving more than one analog signal, your audio interface can record that directly.

An audio interface also has the capability to directly record multiple tracks in your Digital Audio Workstation (DAW), such as from a guitar, speakers, or other gear.

On the other hand, a USB microphone is more of a “one step at a time” scenario.

If you are only using it for work or for recording some voiceovers or podcasts, it does the job fine.

However, when you have MULTIPLE audio sources when you are using your home studio – such as guitars and other instruments, an audio interface makes the job so much easier.

In short, an audio interface is more versatile and you can plug in as many instruments as you want, without losing the sound quality of your recordings.

When it comes to learning curves and complexity, a USB microphone is much more beginner-friendly. It does not require much technical knowledge.

You simply have to plug your mic cable into your USB port and you are ready to record.

On the other hand, an audio interface would require a little bit more studying before one can comfortably use it for home recording, especially if the person has no background on the device.

An audio interface weighs more than most types of microphones.

Even a small interface still takes up a lot of space and weight if you are going from one place to another.

However, you can easily pack a USB microphone and plug the cable into your computer or laptop on the go.

If you are someone who wants to use your computer while traveling or record outside a home studio, then a USB cable mic might be the best option for you.

Of course, an audio interface is a much more expensive option than a USB microphone.

However, if you really want to record and convert better quality, it’s really the best option out there.

Meanwhile, if you are okay with the power and sound range of a USB microphone, then feel free to use it!

Should I Use an Audio Interface Instead of a USB Mic?

The answer is that it depends on your needs as a user.

Ask yourself, “Why do I need a USB microphone, and what are my future uses for it?”

As we have mentioned earlier, a USB microphone has its own “internal” audio interface, meaning it’s equipped with its analog to digital converter found in an audio interface.

Moreover, aside from the USB cable, the mic may also have a headphone jack that allows a user to listen to the mic’s output.

High-end USB mics sometimes have the ability to act as an external sound card, which also allows you to hear the mix of the output from the mic itself and the audio from the computer.

All in all, it really depends on your setup and if better quality is crucial for you. If you want a plug-and-go type of connection, USB mics are perfect for you.

An XLR microphone is an analog mic that has an XLR connector for its base, hence the name. The base can be connected to an audio interface, preamps, amplifier, and other equipment.

The three metal pins that can be found on the base of an XLR microphone connect it to a female XLR connector at the end of a cable.

There are three common types of XLR microphones, which are:

When it comes to quality, an XLR microphone wins against USB microphones!

XLR cables are usually thick because it contains wires, a metal screen, and insulators.

This XLR cable enables the XLR microphone to maintain great audio quality, as it prevents interference and noise.

However, you need to have an audio interface to connect the mic.

When it comes to convenience and portability, an XLR microphone does not work on its own as well as a USB mic, which means carrying other heavy equipment.

Price-wise, an XLR microphone is more expensive than a USB microphone.

If you don’t want to use an external audio interface but want to record directly onto your computer, this microphone fits what you are looking for!

A USB cable – whether that is A or USB-C – can effectively convert the analog signal from the recording and translate it into a digital signal for post-processing.

XLR mics trump USB microphones in terms of audio quality for a good reason, and that’s because XLR microphones have a form of noise control mechanism in their XLR cable.

On the other hand, the USB cable does not have the same capacity, which is why you might need an audio interface for better audio.

Remember, what makes a USB microphone appear for so many is that its USB cable is much easier to connect to a computer than an XLR cable.

Some high-end microphones even have a headphone output or can be directly connected to the speakers while you are processing the digital audio in software.

How Do USB Interfaces Work?

The ANALOG is the signal produced by the instrument, or the vocals during recordings, while the DIGITAL audio is the one recognized by the computer or software.

What the audio interface does is it is an analog to digital converter of sounds or signals that they receive from XLR microphones.

More than that, the audio received from an XLR microphone is also routed to studio monitors and headphones.

You can think of an audio interface as an adapter to and from I/O.

A USB interface is commonly connected to a computer through a USB cable. This enables the user to directly control and convert the produced sound.

Aside from offering multiple connectives, another benefit is its headphones’ sound provides more detail than a USB mic.

Can You Use a USB Mic With a DAW?

This is under the Aggregate Audio development of MacOS. This means that Apple users have the option to combine different audio sources into a single driver.

This includes non-PC models such as an iPad and an iPhone.

However, this needs a bit more work since you will need an adapter and an extra jack just in case.

Under Utilities, this is called the Audio MIDI. All you have to do is to open your DAW and select the microphone that you want to record tracks with.

From your DAW, the controls are set and you can process the dynamic of your music as the USB cable mic translates the signals from analog to digital.

How Do I Get My Computer to Recognize My Microphone?

Common microphone problems such as this can be solved through the Settings/Controls of your computer.

But, if you have checked the Settings and there is something else that you need to control/adjust, then the following tips might be helpful for you.

Here are some ways in which you can ensure that your gear is recognized by your PC:

We hope that this article has shed light on your question!

Although possible, with USB audio interfaces or a USB mic, you really either choose one or the other, as they are not the best when paired together. There are other options available, such as pairing an XLR microphone.