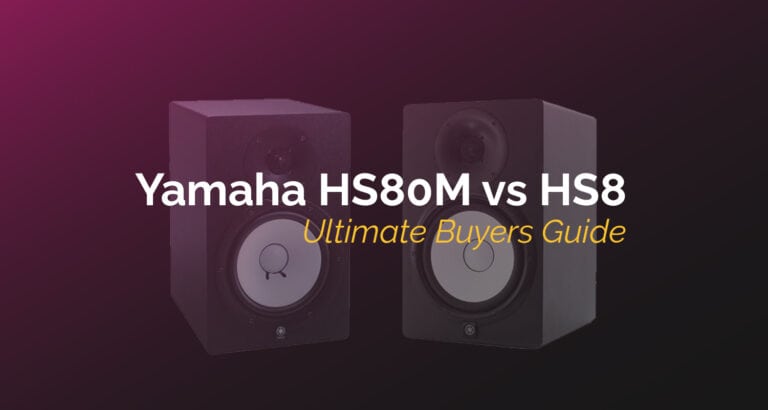 As a mixing engineer, you’ll know how demanding it is to produce a mix with headphones.

When it comes to Yamaha HS80M vs HS8 — which one is best? Although the original HS80M may be more tempting, I still recommend the new HS8.

Yet, it’s too early for the verdict.

Want to hear my thoughts? Read on! Let’s dive into the details and see which of these options fits your needs.

Yamaha HS8 is the upgraded version of HS80M. It offers almost the same acoustic and visual features as the HS80M, with some small differences.

It provides better results in low frequencies because it has a broader frequency range. Also, the manufacturer has improved it in terms of sound level.

Aside from slight shortcomings, if you’re mostly dealing with some BASS-HEAVY sounds, this newer option is a good choice.

Since 1967, when the company started to produce some of its first reference monitors and speakers, Yamaha’s products have turned into a GOLD STANDARD for near-field monitors.

This is because the devices provide an honest representation of the audio frequencies in a monitor.

The HS80M is the most popular among the HS reference monitor series.

Although it’s not a high-end product, it can be the best choice for professional producers because it produces a remarkably flat response and makes your music sound the way it should.

Overall, the HS80M is a decent loudspeaker that will help your final mix get you to your goal.

Overall, the HS80M is the winner of the tech specs, due to the following breakdown:

Both the HS80M and HS8 are powered or active loudspeakers.

This means they have a built-in amplifier and don’t need a volume source, such as an audio interface, to produce the sounds.

The HS80M and HS8 are bi-amped systems, meaning there’s an individual amp for the tweeter (LF) and another for the core woofer (HF).

I guarantee you’ll have a LOUD and CLEAR sound without needing separate amplification.

When it comes to amplification power, neither the HS8 nor the HS80M monitor is stronger than the other.

Both monitors come with an 8-inch white cone woofer for high frequencies (HF).

The large cones mean they’ll provide good bass responses, allowing you to mix the low end even at low volumes.

They also have a 1-inch dome tweeter for low frequencies (LF).

The LF power amp on both models is 75W, and the HF driver power amp operates at 45W.

So, in both devices, the total amplifier power is 120 watts, and there’s no reason to go for the newer version.

Each studio monitor covers a different range of frequencies.

With its 38Hz to 30kHz frequency response, the HS8 can accurately play low, middle, and high tones. But, its focus is on low frequencies, which makes it more desirable for modern genres.

Despite the improvement in frequency, customers still prefer the earlier HS80M.

But, while everyone agrees that the HS80M has appropriate engineering, some users (including myself) think the new one has ruined its OUTSTANDING performance.

Also, customers report they can hear a background hiss when the HS8 is working. There are also reports of annoying clicking sounds on HS8’s tweeter, which is disappointing.

Overall, the HS8 corresponds with lower frequencies, but the HS80M represents the low-end more accurately.

Both monitors are the same size at 16 inches long, 14 inches wide, and 21 inches in height.

Both studio monitor products have the bass reflex port at the rear. So, If you want crystal clear sound, you’d better not put them close to the wall.

However, if you have a small room size and can’t find a better spot for your studio monitor, the Room Control at the backside helps you compensate for the bass roll-off.

Both monitors have XLR and TRS phone jack inputs to connect your instruments, keyboards, and interfaces. So, you can see no upgrades in this feature.

You’ll be good whether you have TRS or XLR input connectors.

The HS80M and HS8 studio monitors look almost identical, and they’re both made of dense, sturdy MDF. This means they’ll last for a long time.

Also, both have a black cabinet with an angled design that dampens the room’s acoustics resonance and delivers a precise sound.

Furthermore, there’s a metal cover over the tweeters, and rubber surrounds the woofers.

However, there’s a slight update on the new HS8 version — the manufacturer has removed the internal shielding to IMPROVE magnet efficiency.

Having a true sound representation and an extremely flat response curve, both monitor products offer the best value in their price range.

Even so, the HS80M is currently cheaper. If you’re looking for cheaper options, check out our list of the Best Studio Monitors Under $200.

Having a true sound representation and an extremely flat response curve, both monitor products offer the best value in their price range.

Even so, the HS80M is currently cheaper. If you’re looking for cheaper options, check out our list of the Best Studio Monitors Under $200.

Stand-Out Features of the Yamaha HS8

They only have little differences, which can be minor to some and major to others, depending on each user’s preference.

Nonetheless, the HS8 and HS80M are great gear for your studio, and you can never go wrong by picking one over the other.

But if I need to choose one, I’d surely go with the upgraded brother of HS80M. The Yamaha HS8 is my BEST PICK for two main reasons:

Whether you pick the new version or stick with the classic, I guarantee your music is in SAFE hands with either of these studio monitors.

But, I highly suggest you consider the HS8 if you:

If none of these matter to you and you’re on a tight budget, go for the HS80M!

It’s still going to be a GREAT ADDITION to your studio and will still bring a lot of value to your production.