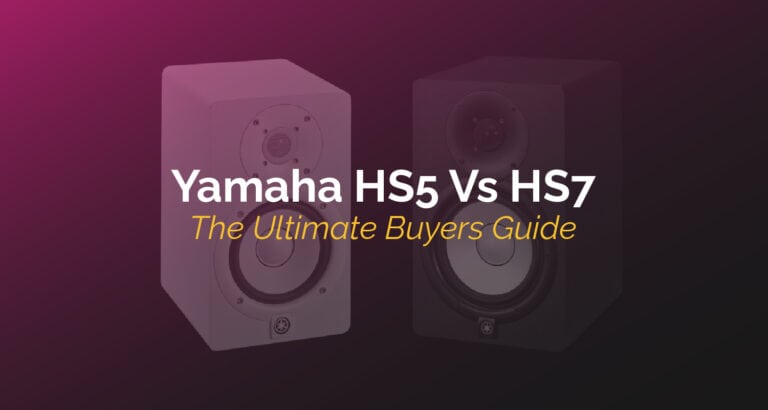 If you’re looking to pick up studio monitors and considering the Yamaha brand, you must have surely come across the Yamaha HS5 and the Yamaha HS7 models.

Which product is better, though? What’s the difference in terms of sound, bass, and performance?

In my opinion, the Yamaha HS7 is the superior product with far more powerful sound and features.

However, I’d also say the Yamaha HS5 is a great pick if you have a smaller studio space.

Read on for this Yamaha HS5 vs HS7 ultimate buyers guide.

Let me give you a brief look at the Yamaha HS5 vs HS7 and how they stack up on their own.

The Yamaha HS series remains one of the brand’s MOST POPULAR products.

The wattage is 70 Watts, and it has a high-end frequency response of up to 30kHz.

It comes with all of the HS series’ signature features, such as:

Perhaps my favorite thing about this model is that it boasts the brand-new noise-reduction technology to keep external disturbances to a minimum.

The idea behind this design is to limit outside interference and allow the users to listen to the studio monitors authentically.

Yamaha has achieved this by controlling and reducing the vortex created near the speaker’s port.

It conducts an in-depth analysis to reduce the audible noise levels by up to 6dB, allowing you to experience pure playback from the monitors and enjoy the privileges of true sound.

RELATED: Yamaha HS7 vs HS8: What Are the Main Differences?

It operates on 95 Watts and has a high-end frequency range of 30KHz.

I’ll list down Yamaha HS5 vs. HS7 features, so you’ll be able to narrow down your preferred product.

This means that the bass output begins to drop off for the HS5 after 54 Hz, while the bass remains steady longer with the HS7.

Thus, if you need the low-end frequency and bass more often than not, I highly suggest that you pick up the HS7.

Both models have the same high-frequency range, so either monitor will do well in that aspect.

Unlike the bass, the mids and highs of both models are crystal clear.

But while the mids are near indistinguishable between products, I noticed that the highs sound slightly flatter and clearer in the HS7 thanks to the superior woofer size.

If you’re looking for a monitor that doesn’t require a subwoofer, the HS7 will do nicely.

I assure you that it’s powerful enough to not require one and can generate enough oomph on its own.

However, if you’re looking for a monitor to complement your subwoofer, you should opt for the HS5.

If you don’t own a sub but are interested in the HS5, I recommend pairing it with the Yamaha HS8 sub to create an incredible sound.

Thus, to determine which of these models works best for you, it makes sense to consider the size of your studio.

A larger studio will benefit from the HS7, while a smaller space can easily make do with the HS5.

In my experience, you can always bring the HS5 up to speed within a given space by picking up a pair of subwoofers to equalize the monitors.

This explains why the HS5 starts to trail off a bit after the 1kHz range, which could be a problem.

The HS7 manages to stay steady well after this range.

Therefore, if you’re looking for a set of speakers that you can blast with reckless abandon, the HS7 will work better for you than the HS5.

The HS7 is far bigger and heftier than the HS5:

If you’re looking to save a lot of space in your studio or lack enough space for a large set of active monitors, the HS5 will suit your needs.

On the other hand, since the HS7 is more powerful, I think it makes sense that it’s heftier and bulkier than the HS5.

I didn’t consider the weight a big problem since I wasn’t lifting these monitors around anyway.

The weight just shows how much more power the HS7 is packing compared to the HS5.

Thus, if you’re looking at creating a PROFESSIONAL setup rather than a home studio, opt for the Yamaha HS7.

Sure, the HS7 is a slightly bigger and better product with a bigger price tag as well, but I wouldn’t say it’s always the best option.

Opt for the Yamaha HS7, if you:

In comparison, the Yamaha HS5 makes more sense if you:

Some great alternatives to the HS5 are the JBL LSR305 and the Rokit 5 just in case you want to step away from the Yamaha brand.