Studio Monitors vs Speakers: How Are They Different? 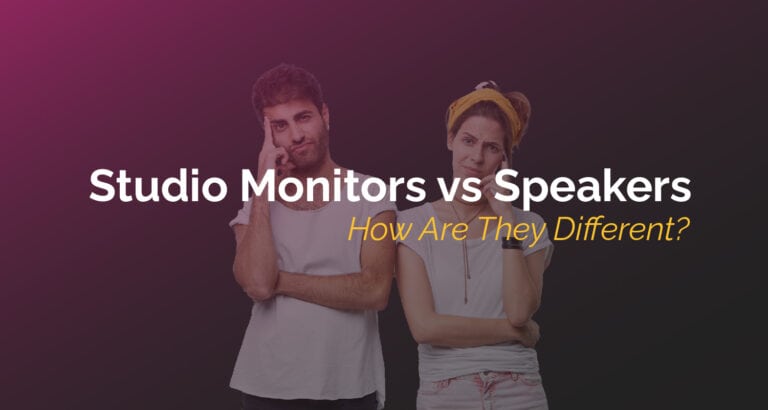 We get the confusion – regular speakers and studio monitors look virtually similar!

But there is more than that!

Dive right into the differences between studio monitors and powered speakers to know which of the two has the right set of features for what you need!

How Are Studio Monitors Different From Speakers?

A studio monitor (otherwise known as a monitor speaker) is a type of speaker that is commonly used for mastering audio in professional audio production settings.

On the other hand, a regular speaker is a common audio output device that CAN’T project sounds in flat frequency response.

This is why regular speakers are usually used for casual listening or in settings that don’t require much accurate sound quality.

For example, both a car stereo and a home theater system are regular speakers.

To flesh out which between the two is the more optimal sound system for you to use, our team has curated a more detailed breakdown just for you!

You would want to consider the penetrating quality of your device’s sound output so that it’s neither too loud nor quiet for your specific setting.

This complements the ability of a studio monitor to accurately reproduce sounds, making critical listening for an audio professional easier.

These are the ideal settings for a studio monitor to optimize its sound projection:

Mostly depending on the size and the brand of your regular speaker, it should generally be able to project sound in large and even open spaces.

These are the ideal settings for a speaker to optimize its sound projection:

Our Final Verdict For Sound Projection

It depends on the optimal sound quality for your setting.

An amplifier is an electronic device that can alter the input signal of sound into a stronger version to ultimately achieve the optimal output signal of your device.

This means that you don’t need external power amplifiers when you choose to go for a studio monitor because it already has a built-in amplifier in its speaker cabinet.

This means that they may require an external power amplifier if you want to increase the input signal of your audio file.

Usually, power amplifiers are standalone units that strengthen the current of an audio signal.

Remember how we mentioned earlier that regular speakers can playback an audio file over longer distances than studio monitors?

The only downside to this is that the external amplifiers of regular speakers usually add a distorted noise to your audio quality.

Our Final Verdict For Amplifiers

It depends on what you’ll be using your prospect audio device for.

The built-in amplifiers of studio monitors do not enhance sound quality (no coloration to the pitch or amplitude of your audio), but it still amplifies it.

A regular speaker would need external amplifiers to reach higher volumes, with the small downside of causing distortion or slight sound differences.

Your speaker’s frequency response (or frequency range) is the range or variety of sounds that your device can reproduce.

This means that the better the frequency response of your device is, the more will it be able to reproduce all the high, middle, and low tones in your audio file.

Let’s say that a friend sent you an audio recording and you want to hear the song through your computer speakers.

After a few seconds, you decide it’s a good song, and you turn the volume up to block out the background noise.

The moment you do this, the playback of the recorded material begins to sound damaged – characterized by a grinding or buzzing sound.

Studio Monitors are less likely to distort the natural sound wave of your audio file because of how they are built.

If you ever purchase a studio monitor that begins distorting the audio you are trying to play, it is most likely your software.

Check the following as these could be causing the distortion:

Let’s say that you’re blasting out Queen’s Somebody To Love on your home stereo, and you decide that you want to turn up the volume because their vocals are simply divine.

The higher the volume goes, the more power your amplifier needs to maintain the quality of its audio production.

When your speaker cannot provide your amplifier the power that it needs, your audio becomes distorted.

Our Final Verdict For Distortion

Studio Monitors mostly won this round because their built-in amplifier helps prevent distortion versus a regular speaker, which needs an external amplifier.

Your regular speaker is ‘dynamic’ when its transducer responds well to a change in the volume of your audio.

Here are some device components to consider to ensure a dynamic audio output:

The Total Harmonic Threshold is the recommended THD limit (5% for THD and 3% for any single harmonic).

Remember our earlier discussion about the difference between active and passive speakers?

Well-designed amplifiers usually have lower THDs than the loudspeaker or audio playback device that you have.

But for the latter, it’s not uncommon to have up to 10% THD.

This indicates that there will be higher levels of added circuit noise and, thus, harmonic distortion to your audio’s original sound wave.

Similar to what our team thought about distortion, we opted for studio monitors as well.

Some of us even admitted our willingness to have dedicated monitor speakers instead of having regular speakers.

The most common reasoning behind this is the higher levels of THD when it comes to regular speakers.

Ah, this is where things get interesting.

After going through the features and technicalities that distinguish a studio monitor from a powered speaker, let’s now talk about one of the biggest deciding factors in choosing between the two.

Scroll down to see the price range of top-rated (in Amazon) speakers and studio monitors.

Our Final Verdict For Cost Difference

As much as our team has mostly been pro-studio monitors, we’re no audio professional.

Sure, we appreciate it whenever an audio device nicely plays the authentic rich bass beats of a song.

But we’ve decided that as long our system’s sound closely resembles the song that we want to hear, then regular speakers are the way to go. It also helps that they’re a lot CHEAPER too.

When To Use Studio Monitors

Studio monitors are perfect for distortion and coloration-free critical listening.

The authentic sound output of studio monitors is the equivalent of getting your coffee black – no sugar, no cream, and no alterations.

When To Use Powered Speakers

On the other hand, powered speakers are perfect for casual listeners who don’t mind the slight colorations and distortions in the sound output of their devices.

Can You Use Regular Speakers As Studio Monitors?

If you already have a regular speaker, you can use it in place of an actual studio monitor but only in the same colored quality that regular speakers, such as home hi-fi loudspeakers, can project.

A Note Before You Go

After discussing the differences between studio monitors and regular speakers, our team wants to remind you of a key detail about our article:

Our team used the ‘studio monitors vs. regular speakers’ approach to differentiate the speakers’ features because we believe that your individual context largely affects what makes whichever speaker type better.

So, be it for audio projects involving world-class facilities, your home theater listening, or even home audio production, we hope that our article helps you decide which speaker responds best to your needs.