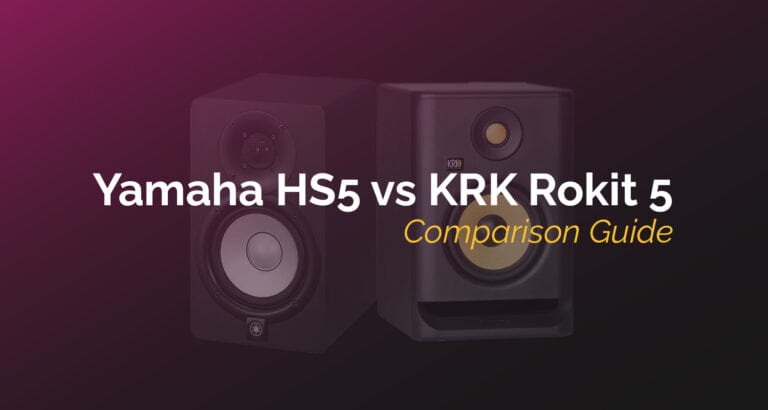 The Yamaha HS5 and the KRK Rokit 5 are popular studio monitors for those new to the mixing world.

However, how do you know which one to pick? After a comprehensive comparison between the two, we’ve found the Yamaha HS5 as the winner.

While the KRK Rokit 5 G3 is more geared toward bass-heavy production, the HS5 is a wiser choice as a reference monitor. It provides a more natural sound and is a better assistant for beat markers.

With this in mind, let’s explore the Yamaha HS5 vs KRK Rokit 5 battle and check out each in more detail so you can make your final decision with more confidence.

Anyone with a music interest has heard of Yamaha. It’s produced instruments since 1887 and its reference monitors since 1967.

But, the company has gained all the popularity for one reason: accuracy, with the HS5 G3 being an excellent example of this.

Yamaha’s HS5 is a 5-inch powered studio monitor with a compact design, which is excellent for small studios. Unlike larger models, you can put it rather close to your desk and still have a coherent sound.

Just like other HS series versions, the HS5 offers a realistic sound and is great for mixdown purposes. Perfect for crisp sound quality!

Also, producers and beatmakers appreciate it for the flat response curve. The minimal ups and downs in the response curve indicate their output is more than accurate.

The biggest downside is that it lacks a little definition at the low-end. So, if you need it for hip-hop production, I suggest to look to invest in a subwoofer.

While mixing down, make sure you don’t put the speaker close to the wall. It has a rear port to avoid resonance issues, which won’t do its job properly if blocked.

See how it fares compared to the JBL LSR305!

As one of the world’s top loudspeaker manufacturers, KRK’s new Rokit series, including the KRK Rokit 5 G3, is a constant favorite of audio enthusiasts, first-time producers and DJs.

It’s a 5-inch speaker that produces enough sound level for limited spaces. And, customers comment on how this medium-sized speaker has a clear bass response and a well-defined midrange.

Although not the best bet for pro-level mixing, this model is durable and excellent for producing EDM, DubStep, and Bass House genres.

Despite their impressive sound level and wide frequency ranges, customers believe that Rokit models deliver colorful sounds compared to the Yamaha series. This indicates they may inaccurately represent the sounds.

It’s not a good idea to use them for mixdown scenarios, but they’re excellent for creative production.

See how it’s like compared to the JBL LSR305!

Before deciding which speaker suits your needs, take a look at the specs below for a quick comparison between Yamaha HS5 vs KRK Rokit 5 loudspeakers.

Many customers comment on how the KRK Rokit 5 is only applicable for mid to upper bass. And, it creates a buzzy sound when the bass is boosted.

The KRK Rokit 5 produces tracks in high volumes. So, it may sound very impressive at first, but it doesn’t mean it’s representing the actual sounds.

In contrast, the Yamaha HS5 powered studio monitor is more accurate. It has a flatter response curve and produces high-resolution sounds. With this monitor, you can recognize the smallest notes and distinguish a poor mix from a good one.

As active/powered loudspeakers, both the Yamaha HS5 and KRK Rokit 5 have embedded amplifiers inside their cabinet. This means you don’t need to bother matching the monitors to amps.

What’s more, all active monitors have a more compact design. They’re easier to connect to other devices because you don’t need an additional component.

Another advantage of active speakers over passive ones is that their crossover is more precise.

Both studio monitors are bi-amped, meaning they have separate amplifiers for HF and drivers. So, they don’t need extra amplifiers to supplement different frequency ranges.

Both the HS5 and Rokit 5 have a 1-inch dome tweeter for HF driver enhancements, plus a 5-inch woofer as the low-frequency driver.

The only difference is that the HS5 woofer is made of a stiff paper cone while the Rokit 5 has a glass-aramid woofer.

According to customer reviews, Aramid fabrics — such as Kevlar — are more efficient at transferring sound. They have fewer vibrations, and therefore, don’t dampen the low frequencies.

On the other hand, paper is a bit “lossy.” It breaks up the sounds and provides a less accurate result.

Both paper and aramid composites have low densities. So, if the manufacturer uses multiple layers to provide more stiffness, they don’t increase the monitor’s weight. However, other than the lightweight, aramid composites are very strong.

The HS5 uses just 45W to feed the LF driver and 25W to run the tweeter. In comparison, the Rokit 5 has 55W available to the woofer and 20W to the tweeter.

The Yamaha HS5 has a frequency range of 54Hz to 30kHz, making it pretty powerful for the middle-range and high-end of your recordings.

Although 54Hz gives adequate low-end for most purposes—such as guitar performance, keyboards, and chamber music — it doesn’t provide the bass extension for hip-hop or EDM styles. So, you’ll need to buy a sub-woofer for these productions.

On the other hand, the Rokit 5 (G3) gives you access to a wider range of frequencies. It has a frequency range of 45Hz to 35kHz, allowing you to mix the highest and lowest frequencies.

With an SPL of 104 dB, Rokit 5 monitors can reach exceptionally high volumes without distortion from the high end. But, oddly, Yamaha hasn’t provided the maximum peak SPL for the HS5 series.

All in all, the Rokit 5 has a much greater sound compared to the HS5. But, customer feedback indicates that it’s not as clear as the HS5, which makes it more suitable for dance music and beats rather than mixing.

Other than TRS and XLR connections, which you also get on the HS5, KRK’s Rokit 5 has an additional quarter-inch socket and RCA input jack, allowing you to insert phono inputs.

However, the HS5’s reflex enclosure works better at minimizing resonance. So, it prevents any kind of sonic coloration—a crucial feature for precise monitoring and mixdowns.

The HS5 is a compact reference studio monitor at:

Although small-sized, Rokit 5 is a little bigger than the HS5 but not remarkably so:

The HS5 and Rokit 5 are by no means identical when it comes to construction, but they provide almost the same amount of durability and build quality.

For one thing, both monitors are made of MDF, which is solid and durable. They also have rounded corners to minimize unwanted diffraction. Besides this, both are ported to deliver further acoustic clarity.

Yamaha has protected the HS5’s woofer with rubber surrounds and has a metal cover around the tweeter. In comparison, KRK has used foam surrounds on the Rokit 5’s woofer.

Both metal and rubber are sturdy materials, stronger than foam. They offer more protection for the woofer and higher resistance against physical damage. So, the Hs5’s woofer surrounds last longer.

All Yamaha HS monitors mimic the appearance of the classic Yamaha NS10s, which was an industry standard for years.

The philosophy behind this simple design is to reflect the acoustic purity of Yamaha’s reference monitors.

On the other hand, the Rokit 5 features a more modern appearance that adds decor to your surroundings with its black and yellow scheme. There’s also a large LCD at its bottom to enhance your settings.

The HS5 model lacks this fancy feature, but you can find the EQ controls at the backside instead.

According to Yamaha, all its monitors, including the HS5, have a three-year warranty for parts and labor. But note that the manufacturer won’t honor warranties unless you’ve bought the studio monitor from Yamaha Authorized Dealers.

Similarly, KRK offers a three-year warranty on its monitors. If your studio monitor stops working or produces hisses or annoying sounds, the manufacturer will help you through customer service. If they fail to address the issue, you can send the studio monitor to the dealer to repair it.

The HS5’s tuning options, such as Room Control and High Trim switches, allow you to tune the settings based on the room’s environment.

It also has a small white LED that indicates the on/off mode and a power cord and user manual to ease the setup process.

But, the Rokit 5 also has a little LCD controller rather than just a high and low trim. What’s more, it’s equipped with an Android and iOS application to give you more control over the device.

Overall, the Rokit 5 is ideal for tech-savvy people because it comes with more extras and high-tech features. However, the HS5 follows a simplistic approach in terms of control options.

Customers seem to praise value for money in both models because they don’t sacrifice performance over quality, or vice versa.

However, the HS5 is a little more expensive than Rokit 5.

Generally speaking, KRK monitors come at an unbelievably affordable price, which is a big reason for their popularity. Also, you can use them for a wide range of applications.

But, this doesn’t mean that the Yamaha HS5 isn’t worth the price tag. The Yamaha HS series offers optimum clarity and accuracy, which is exceptional in the industry. So, they’re also worth every penny you spend on them.

If you want to check out other studio monitor options by price range, check out our lists for:

These are the Yamaha HS5’s standout features:

Whereas, the Rokit 5 also has some unique features compared to the HS5:

With a dense record of cutting-edge features, great sound quality, and budget price range, the Rokit 5 sounds very advantageous for studio-owners. On the other hand, HS5 wins over the Rokit when it comes to honesty and reliability.

While there’s a very tough, close call between the two 5-inch studio monitors, they’re both suitable for different situations:

Choose the Yamaha’s HS5 if you:

If you want both accuracy and low-end efficiency in a single package, you can add a subwoofer to your HS5. Or, simply buy its bigger alternative, the Yamaha HS7.

Rokit studio monitors are good for a variety of purposes. From DJing and mixing to entertainment purposes, such as dancing and playing video games, these monitors are admired in the industry.

However, when it comes to producing, we recommend them for beginners only.

The Yamaha HS5 series is more than good for its size. Also, it’s the best powered studio monitor you can get at this price range.

A long-tested speaker, it has a durable body, quality woofer, and a very flat sound quality. The only downside is that it lacks enough low-end, but you can easily address this with a decent subwoofer.

Can I Use Normal Speakers as Studio Monitors?

You can use normal speakers as studio monitors, but they won’t reflect every detail, and the result will be nothing but a jumbled, poorly mixed track.

Looking for other equipment to complete your studio? Check out this full studio gear guide here!