How to Break In Studio Monitors & Speakers: [A Full Guide] 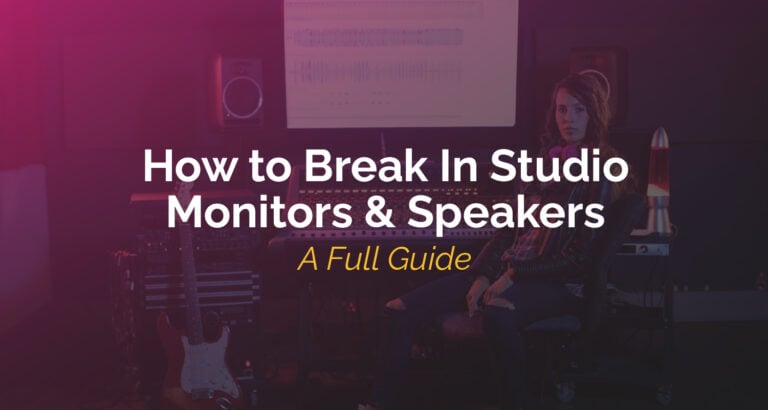 After quite some time saving up for a pair of studio monitors, you must be thinking, “Do I really need to break in these bad boys, and how, exactly?”

Most audiophiles would have you thinking that you NEED to break in your studio monitors, but what does that mean?

And is it an essential part of owning speakers? Or is it just a myth that needs to be busted?

Well, lucky for you, we have all the answers to your dying questions regarding breaking in speakers and how to do them correctly!

How to Safely Break In Your New Studio Monitors

Before deciding whether you want to run in your monitors, you might be curious about the process, so you know what you’re getting into.

NOTE: Most engineers and music producers would agree that there are multiple methods, depending on your gear or technique. Therefore, it’s a good practice to follow.

Here are a few and most essential steps to know how to break in studio monitors:

1. Do a Warmup First

Warming up your speakers before blasting them is ideal in the break-in period of your monitors.

It would be perfect for playing some music with low-to-moderate volume before increasing it.

2. Break in All the Frequencies

Play some music with a wide variety of frequencies. Create a music playlist with a variety of music and instrumentation.

By doing this, you will loosen the monitors’ frequency response. Listen to a piece of music that’s also bass-heavy to hear the difference.

Playing pink noise for an hour or two would also be ideal as this can “loosen up” parts of the drivers.

The period you break in your monitor speakers VARIES from one manufacturing company to another.

Some say that 10-15 hours is enough, but it depends upon your technique and how loose you want it to be.

“The studio monitors will take break-in time to achieve optimum sonic performance. Under moderate use, play a favorite album between 15 to 25 hours.”

On the other hand, here’s what Neumann KH 120A Studio Monitors Review @ Mix Online have to say:

“After setting the filters for my room and an extensive break-in period, they became both punchy and percussive in the low end, as well as fast and “airy” in the upper end of the frequency response.”

A tip for those who don’t want to receive complaints from neighbors after playing music the entire day: place your speakers face to face and invert the signal for one of the speakers.

This way, you’re CANCELING OUT the bass frequencies of each monitor.

Another useful tip we can give you is to use the monitors at a moderate volume in the breaking-in period.

Avoid high volumes until the speakers are fully broken so that your speakers can adjust little by little.

Where Does the Theory Come From?

A run-in or break-in time loosens the components and “evens out” the frequency response of speakers.

Speaker cones (along with other electrical components) loosen up as the magnet strength changes.

Why Do I Need to Break in New Speakers?

Some say it’s just like getting a new pair of shoes or jeans; it doesn’t feel right when you first buy them.

The materials feel a bit rigid and stiff. But that’s because it came from a factory and has never been used or moved.

It needs some time to get used to!

After wearing your new pair of shoes or jeans, you’ll see that they will start to sort of run in and fit in your frame.

Studio monitors have moving parts; these parts need a little time to move and be at ease in their new environment.

But let’s see what manufacturers have to say about breaking in speakers!

Yamaha is one of the best studio manufacturers in the world. But nothing in their products’ manual mentions breaking in their speakers.

The company confirmed in a phone call through a representative that there is NO NEED to perform a run-in on their speakers.

Although it’s not necessarily them saying that breaking speakers in is a myth, we can still look into other manufacturers’ thoughts on the subject.

They recommend changing the position of your monitors for a better listening experience.

Like Yamaha, Focal is also a widely respected brand and one of the best in the market.

According to Focal, the parts need some time to adjust before settling in their new environment and reaching their full potential.

Yamaha and Focal are two different speaker manufacturers, and we believe that taking their advice before doing any test for your home studio is better than not.

Here’s another credible manufacturer that should help you out.

They made an elaborate video explaining how breaking in speakers works when buying a pair of monitor speakers.

The company explains that the suspension system is often stiffer with a brand-new speaker, which can cause distortion.

Hence, breaking in should be COMMON PRACTICE!

They recommend loosening up the drivers for at least 8 hours before using them in a professional setting.

If the manufacturer advises that you burn in your speakers, then it’s a good thing to do. Otherwise, these professionals wouldn’t say so, right?

There’s no need to ask Klipsch whether they recommend doing a burn-in for their speakers because it’s already in the manual.

Here’s what they have to say:

“Your speakers contain several moving parts but prior to use, they’ve never actually moved before. Essentially, pieces of the assembly like the spider and the surround will be stiff at first. Due to the rigidness of your new speakers, they will not be as dynamic until they have had a chance to move and become more flexible.”

Playing music that you are familiar with may help you detect when the burn-in improvements begin.

Again, there is no absolute fixed time for speaker burn-in. We advise that you use and appreciate your speakers, allowing any burn-in to occur naturally.

To understand, try observing the variations in the music that happens with burn-in. This mechanical compliance improvement helps the speakers replicate the stream more accurately.

To answer whether manufacturers of the best brands recommend breaking-in speakers:

Is Breaking in Speakers a Myth?

All in all, we think that breaking in speakers varies from person to person, and it’s very much anecdotal.

We can never have a final word on whether or not it is true.

Even the brands recommend breaking in the speakers they built, which is highly suggestive of the theory of breaking in speakers.

There’s also one forum post online that suggests that it’s just a myth. These are their words:

“Manufacturers either genuinely believe in the speaker break-in myth, repeating what they have falsely concluded like audiophiles. Or are hoping that if you don’t like the speaker at first, you hang on to it longer to lose the motivation or option to return them later.” -Anonymous

This topic is very much up for debate, but here are a couple of things to address before we can settle on an answer to this question.

Before selling their devices out in the market, manufacturers must TEST them to ensure quality control.

This means that there must be some sort of burn-in in the testing procedure.

However, the difference between testing newly manufactured speakers and burning in speakers on your own is the TIME it takes.

Otherwise, nobody would think that breaking in their speakers after buying would seem different.

The debate about breaking in speakers has been going on for quite a long time among audiophiles.

Some people try recording their speakers, and they’ve never heard of a difference between “breaking in” and straight up using it.

However, we’ve never heard anyone complaining about their speakers after breaking in. It’s always on the positive side of things.

Most engineers recommend it, and some don’t.

A brand-new driver that has never been attached to an audio source or made any sound will not function as well as its burned-in equivalent.

The new speaker components are relatively inflexible and stiff and need to be broken in.

This is especially true of the spider and surrounds, while it also plays a role in the cone/diaphragm.

Are you still on the fence or confused regarding the breaking-in procedure of your monitors?

Don’t worry! If you still have questions in mind, here are a couple of answers that may help you out!

Do All Studio Monitors Need to be Broken In?

Just like how empires like Yamaha and Klipsch have different takes on the subject, we, too, decided that NOT ALL monitors need to be broken in.

If the manufacturers recommend that you break in your speakers, great, do it!

Although most music producers and manufacturers agree that it’s not essential, they think breaking in speakers helps with the sound quality.

However, keep in mind that the evidence is still anecdotal and varies from person to person.

Do Monitors Only Need to Be Broken In Once?

Some people think that the “loosening” effect might be gone after quite some time of playing.

But the point of breaking in speakers is that, when you initially buy them, that’s when you break the speakers.

However, if you haven’t been using it for a long period of time, the materials may stiffen up, and you may have to undergo the same process.

Let’s say it’s been left unused for a month or two; it’s a good idea to go through the same procedure, but not for the same period.

Is There an Evidence Behind the Theory?

There is no scientific evidence to back up this tradition of audiophiles. But maybe someday, there will be.

The claims circling around this topic come from personal and anecdotal experiences.

Many online forums have been popping up to share their findings by recording their studio monitor speakers and sharing the data.

If you’re a music producer who’s very enthusiastic about their equipment and the music they produce, the technique of breaking your speakers in highly depends upon your practice.

Even if some manufacturers recommend it, it will always depend on you as the producer.

Remember that this topic is very anecdotal, so of course, it’s only you, the listener, who will be able to unlock the full potential of your speakers.

It’s not necessarily something that will make your speaker perform well or badly, and it’s just an added boost to your overall music experience.

Even if you’re convinced about this theory, remember that this procedure is not a necessary step for every monitor.

Refer to the manuals or the manufacturers to be on the safe side!

Overall, we think it’s worth trying! You can think of it as a warming-up session before the real recording begins.