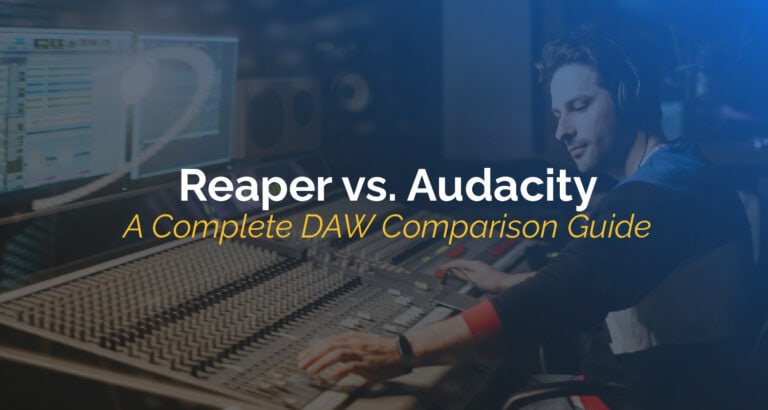 Many audio directors have experimented with what they could do in music production for recording audio since the advent of digital audio workstations.

There are numerous advantages:

A digital audio workstation and recording tools, such as microphones and headphones, are essential when creating music.

These digital audio workstations, also called DAW, enable you to edit and record audio and other more advanced features useful to a music producer.

When it comes to audio editing, there are a zillion possibilities, from Reaper, Audacity, Logic Pro, and FL Studio.

Two of the most popular free software for producing audio available today are Reaper and Audacity, but which one is superior?

Here, we’ll look at two free digital audio workstations in the market. Who will come out on top with Audacity vs. Reaper?

Reaper is a 15-year-old digital audio workstation. Existing track modification and live audio, and virtual instruments recording are all made possible by this editing software.

It also includes video scoring, an imperative tool for any audio project. You can begin recording and editing multiple tracks at the same time.

Reaper also lets you alter the pop-up window of the audio interface, as well as the menus, toolbars, and macros, in contrast to many other DAWs.

Unfortunately, Reaper’s user interface is convoluted and challenging, with an extensive library of sound effects. To ease the learning process, there are numerous online tutorials available.

The software costs $60 for a discounted license and $225 for a commercial license following a 60-day free trial period. Reaper is also constantly updated.

The Reaper workstation is the best DAW for commercial use because it offers the feel of a professional DAW with essential features in efficient recording and voice-overs.

Additionally, this system integrates third-party plugins, enabling those who install Reaper to change or adapt to new time-saving features, unlike audacity.

This workstation also features a mastering process where any last-minute solution to editing audio quality may be done, unlike other DAWs.

Audio editing is also a part of this system. Reaper comes in 32- and 65-bit versions and handles all audio formats, video files, and sound files.

Additionally, Reaper includes a large selection of VST effects from numerous music producers, some of which are provided with the software as audio effects.

Audacity is a free powerful digital audio workstation that makes it simple to perform music production and recording. The track can be downloaded in MP3, AIFF, or WAV format.

By doing this, you can save the time it would take to format the file properly.

The software is simple to use, and the user interface is not at all confusing. You can edit your recording and add effects to the audio if necessary.

For someone who wants a straightforward tool that doesn’t cost a lot of money but still has some useful features and functionalities, Audacity is fantastic.

Because it is cross-platform, you can use it with different operating systems. Anyone can use it for free, but if you want more features, there are also packages you can buy.

The Live Recording feature of this DAW is a huge advantage. Using the DAW, you can alter the voice overs and audio while it is being recorded, and your changes will be kept.

You can go back and undo any modifications you don’t like using Audacity’s undo feature.

Multi-track recording and editing is another Audacity feature that enables users to manage many recordings simultaneously.

The software is compatible with Windows, Linux, and Mac OS. It is also regularly updated to work with the newest iterations of these operating systems.

There are a few distinctions between Audacity vs. Reaper. Although personal preference is important, technical consideration is highly important when evaluating each workstation.

Free systems are usually a terrific choice, but purchasing a workstation is better when it comes to professional work. In each case, the decision is greatly influenced by the goal.

As previously mentioned, Reaper offers you a 60-day trial. There are two price tiers available: $60 for personal use and $225 for commercial use.

However, regardless of which license you choose, you still receive the same software, so if you intend to sell music, choosing the commercial version is just a matter of honesty.

Reaper is yours for the taking once you have paid for it. There is no need to purchase an annual license or pay for upgrades. It automatically updates.

As long as you have the activation code that is provided to you after you initially pay for the license, all you need to do when you download Reaper is enter it if you have a new computer.

There is also a focus on feature optimization in addition to features. Different sound-enhancing or -adding optimization options are available for each workstation.

For Reaper vs. Audacity, depending on how the workstation is used and whether it is utilized for personal or professional applications, these options may or may not be significant.

The Reaper workstation’s interface can be customized, which improves the system’s appearance.

Audacity, on the other hand, records almost any sound without a hitch and easily handles noise removal.

Using a digital audio workstation correctly is one of the most crucial aspects because nobody wants to struggle with a challenging system.

There is a clear distinction between Reaper vs. Audacity. When it comes to usability, they are both top-notch systems. Simply put, one requires more time to perfect than the other.

Reaper can be more challenging to understand because it has so many features.

Using this workstation requires some practice as you have to traverse imports, exports, and recordings. It takes time to figure out the purpose and identity of all the items on the interface.

Most Reaper users use two monitors, one for sequencing and the other for mixing. You can use the Reaper manual to learn how to use the program more quickly.

Audacity is significantly simpler to use because it has less functionality. Compared to other DAWs, it is simpler and more suitable for novices.

This system doesn’t appear to support any mixers, which is unfortunate. Audacity is well-liked by podcasters and other people who merely need to complete minor jobs.

Having enough support when using an audio/video workstation is crucial. You can contact the business for assistance if something goes wrong with the system.

Both Audacity and Reaper are equally capable of offering assistance in this situation. You can email the business for assistance or visit the FAQ forum if something goes wrong.

Which One Is Better to Edit Audio Files?

Reaper is better software than Audacity for music production tasks. It includes multiple features that might be helpful for both beginning and seasoned producers.

For instance, full midi editing and instrument plugins are essential for music production. There are also numerous shortcuts and time-saving features.

Which Is Better for Voice Overs?

Audacity is your greatest tool if you’re experimenting with voice-overs. It is cost-free, simple to use, and supports various audio formats.

Additionally, it has a sizable community that can teach you how to utilize it correctly.

Reaper will be a better option if you want greater control over your recording and mixing abilities.

Although it costs more than Audacity, it has several cutting-edge capabilities that can improve the quality of your voice recordings.

Is Reaper Good for Beginners?

Reaper is a wonderful DAW for beginners. It is simple to use thanks to its clear style and available video tutorials.

It is simple to use even without complex features despite being fully featured.

Reaper is a great introductory DAW because of its affordable pricing, well-known stability, and minimal computer needs.

How Much RAM Do I Need for Reaper?

Reaper doesn’t have any system requirements beyond “you need a WinXP or OSX PC,” though the more tracks and effects you will employ, the beefier the CPU needs to be.

Performance with sample libraries is also improved with more RAM.

These days, 8GB is the standard. Although 16GB isn’t excessive, we wouldn’t say it’s essential. Go for it if you can afford it.

It primarily depends on the following:

Tracks can always be frozen if necessary.

Does Audacity Have Autotune?

With Audacity, you can modify audio and songs by adding effects. To put it simply, it uses vocal effects to create files of higher quality.

When adjusting the song’s pitch in the Audacity program, you might not discover an autotune tool. Additionally, no built-in tools exist for adjusting recordings.

But among the free plugins that let you autotune in Audacity is GSnap. Windows, Mac, and Linux are all compatible with the GSnap plugin.

Reaper and Audacity are excellent DAWs for your studio audio workstation, but they work differently, making them appealing to users depending on the project they’re working on.

It’s crucial to consider a wide range of features and how well-optimized these features might be when looking for the best DAW on the market.

You want more sophisticated capabilities like support for virtual instruments and the capacity to record multiple tracks.

This is the greatest option for music production, recording, mixing, and mastering.

Despite having fewer features, you want to do simple jobs, including quick audio editing, effective audio recording, noise removal, and voiceovers.

However, it is not the greatest choice for music producers or anyone wishing to undertake intricate work.

The Reaper workstation is our choice between Reaper and Audacity. Despite being sophisticated, this system provides many recording, editing, and producing options.

Even if it costs money, functionality can be wonderfully optimized, and updates are always free.

Reaper has more aesthetically beautiful themes and thorough choices to maximize its many features.

Reaper is simple to integrate into your studio because it runs on Windows, macOS, and Linux. You can quickly start recording your tunes if you pair one with a good microphone.

In the end, the decision on whichever DAW you prefer is yours.