Why Does My Mic Sound Muffled? [Quick Guide & How to Fix] 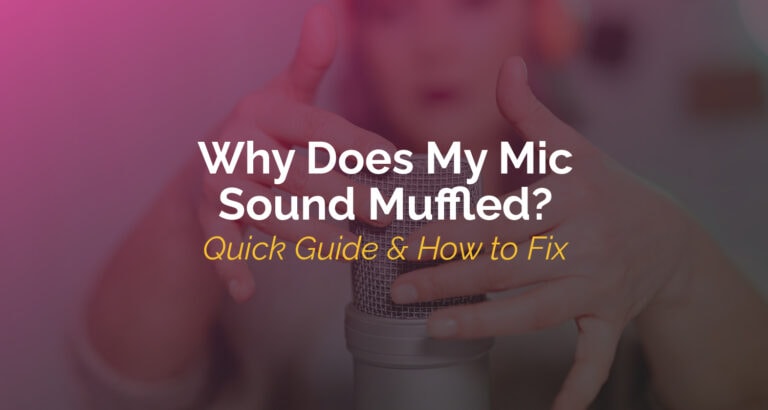 There’s nothing worse than recording epic audio, finishing your podcast ending, and finally perfecting that guitar instrumental — only to find the sounds muffled and unclear later.

The sound quality can MAKE or BREAK a project, so we understand the frustrations that come with a muffled mic.

If you’re dealing with this problem, here are quick ways to fix that condenser microphone by yourself!

Why Does My Mic Sound Muffled? [5 Reasons]

Muffled audio is more common than you realize. These are some reasons behind a muffled condenser mic and ways to assess the error more accurately:

In some cases, the problem is not with the actual microphone. Instead, it could be a glitch in the recording software that couldn’t translate the sounds correctly.

If the issue isn’t with the program, it could be your computer’s microphone system causing the muffled sound.

Connect your microphones to another recording device or computer and check if it’s working there. Try if your laptop mic sounds muffled as well.

If your recording mic works on another laptop and the default mic is also muffled, your computer software is likely the problem.

If it’s not a software issue, you can sigh in relief. After all, fixing software can be more meticulous than hardware!

Faulty condenser mics can cause a muffled sound. That’s because the microphone probably has broken physical parts that hinder it from picking up the sounds correctly.

The issue can also be broken cords or laptop ports. Even if the microphone and laptop are excellently working, the connector is CRUCIAL to the recording quality.

The way to assess this is through trial and error:

One common way we use a mic anywhere is to simply put our mouths directly in front of it.

While correct, there’s a slight difference if you use a condenser mic.

This mic has a cardioid pattern, meaning it only picks up the sound waves from ONE direction. If your voice or sound comes from the wrong direction, there’s a high tendency for it to sound muffled.

If you’re using one of those fancy microphones, know that it’s extra sensitive and requires fancier equipment.

Your recording space should be appropriate, and your equipment must have good phantom power compatible with your microphone.

That’s why you see other musicians recording in professional studios — because an apt environment is ESSENTIAL for your output to sound good.

You can bring your equipment to a different room with better acoustics to see if the voice still sounds muffled.

Believe it or not, using the wrong mic is quite common. For non-professionals, microphones look the same, serving the same purpose.

But there’s a correct mic for every situation. You can’t use cheap mics to record studio-like audios for podcasts or music, and it’s a waste to use expensive ones for karaoke sessions!

Using the inappropriate mic is one way to ruin it quickly.

Before you buy a new microphone and get rid of your current one out of frustration, here are a few ways to fix your muffled mic:

Most microphone issues stem from messed-up equalization (EQ) settings. Your EQ is responsible for the bass, mid-range, and treble.

More bass and high frequencies can cause a muffled sound. So, try doing these:

2. Check Your Mic Port or Capsule

Debris builds up in ports and capsules, blocking the passageway and making your mic’s audio sound muffled. So, blowing into ports to remove these unwanted particles ACTUALLY makes things work!

It could also be an improperly plugged mic. The lines on the cable head are not just designs — they’re operating frequencies meant to be plugged in.

If your microphone cables have covers or windscreen, ensure that it’s compatible with the port or remove it while recording to plug it completely.

3. Adjust the Position of Your Audio Source

A microphone sounds muffled if the sound source comes from the wrong direction. Your mic should be facing you head-on and not pointing elsewhere during recording.

You must also maintain a reasonable distance to avoid a muffled mic sound. If your sound source is too close to the microphone, it can make things sound weird and garbled.

Each type of mic has a prescribed sound source distance. Make sure to learn the PROPER usage so you won’t struggle with a muffled mic.

Everything from the background noise to wall acoustics can make your mics sound muffled.

Understandably, not everyone has access to expensive studios. But you don’t need to build a fancy room — a decent recording area is sufficient to improve your microphone sound.

It helps to make even little improvements to enhance the sound quality. Good audio goes a long way and is a good indicator of how much you’ve worked on the project!

Don’t laugh at the “have you tried turning it off and on?” solution. It often works wonders.

If you suspect that software issues are the reason your mic sounds muffled, rebooting can actually help restart the software and troubleshoot the bugs.

This is where your install/uninstall skills come into play too!

It could also be time for a long-overdue update. Software programs update their systems to fix the glitches.

6. Seek a Professional to Repair It

If your mic sounds muffled despite your best efforts, it could be time to have it professionally assessed.

Of course, it helps to have initial ideas on what’s causing your mics to sound muffled. You can better explain the situation, and the process will be faster.

If it’s only a microphone error, you only have to bring the mic and not your entire software.

What’s worse than a muffled microphone sound? Finding out during editing.

The production process is long and tedious. It’s frustrating to go back to square one just because of a horrible sound.

So, here are ways to avoid getting a bad final recording:

1. Listen to the Sound During Recording

A common rookie mistake is recording a sound or audio “blindly” and only listening to it afterward. By then, you’re already tired from singing or playing.

A setting allows you to listen to your output while recording. You’ll be able to catch microphone issues early on and save a lot of time.

It’s a way to check your microphone beforehand, so you won’t be aggravated with mic issues when the actual recording starts.

It’s tempting to skip mic tests, but you’ll be thankful that you didn’t.

If performances have dry runs, recording audio has sample demos. It’s a preparation process that allows you to record “as if it’s real.”

This may be an extra step, but it lets you see potential problems that may arise, including mic issues.

Record the voice and instruments in their actual volumes and intensity to see how the mics receive it. It’s an excellent way to reposition and adjust yourself before the real deal.

Now that you know how you can fix your mic and get a good recording, let’s answer a few related questions:

How Do You Clean a Microphone?

Debris and dirt can interfere with the sound waves. It’s recommended to carefully clean your mic occasionally.

IMPORTANT NOTE: Don’t soak, submerge, or apply too much soap water to your mics. They’re electronics and don’t do well with water.

How Do You Clean Muddy Vocals?

You can fix muddy vocals by tweaking the EQ settings. Utilize a low-cut filter and decrease the frequencies. Don’t go above 100 Hz!

It also helps to REDUCE the bass, which is where a lot of the “boom” sounds come from.

How Can You Tell if a Mic Is Damaged?

The sound of microphones should be CLEAR, reflecting your actual voice only with little discrepancies based on the EQ settings.

If your sounds come off garbled, distorted, or muddy, there’s something wrong. Some people describe it as sounding like you’re underwater.

In some cases, static sounds or unwanted white noises are in the background.

It’s typically tricky to notice first-hand since you’re not on the listening end of the audio. Make it a habit to listen to your recordings or collect feedback from your listener.

How Can I Test My Mic Sound?

Computers now have settings allowing you to listen to your mic as input. Ensure that your device recognizes the plugged-in mic as the source, not your default microphone.

You can find everything related to mic configurations in your general sound settings. You’ll see a bar that lights up when it picks up audio.

If it’s not moving, no matter how much you speak or hit the mic, your device isn’t detecting your microphone.

You can click the “Test the Mic” option, which differs per computer, but it should go along those lines. Small tests will help you determine if your mic is working.

A faulty microphone is frustrating, but it’s ALWAYS solvable.

It’s not the end of the world, and you can either save your recordings or improve them with better tracks — either way, it’s a win!

We hope this article fixes your mic troubles or helps you avoid similar issues in the future!