Shure SM58 Phantom Power: Is It Necessary for Vocals? 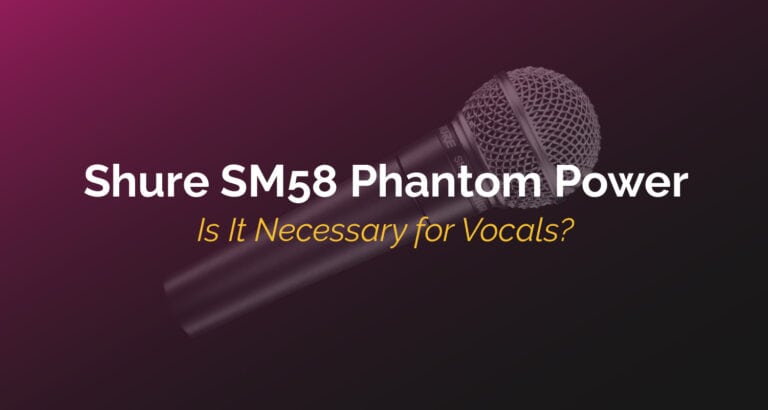 The Shure SM58 is the world’s most popular dynamic microphone. It can be seen in the hands of everyone, from pop idols to presidents, to podcasters, to your friend singing karaoke.

With its many uses and even its penchant for live performances, we must ask:

Does the SM58 need phantom power? Do such similar microphones need this to operate?

Shure is one of the world’s leaders in the audio industry, producing everything from microphones to phonograph cartridges, mixers, and digital signal recording systems.

The SM58, meanwhile, is one of the top dynamic-style microphones on the market when it comes to voice-based audios.

It can handle everything from songs to speeches, poems to instruments. It is a very effective microphone when it comes to all manner of live performances.

Connect the Shure SM58 to your preferred audio interface, and you’ve got the perfect microphone for vocals, regardless of the event.

It’s a must-have for plenty of microphones, so let’s see what makes it so essential and why you may or may not need it on your SM58:

Condenser microphones manufactured in the 1930s, 1940s, and 1950s required a unique power supply. This adapter was frequently huge, heavy, and inconvenient.

Work began in the 1960s on a novel powering approach that would eliminate the need for a separate power adapter.

The mixing board supplied the DC for the condenser mic, which was sent via the microphone cord, avoiding the need for an additional power supply.

Why Is It Called “Phantom Power”?

It is called such because there is no evident external power adapter for the condenser microphone. It transmits its energy through the music lines.

It is a direct current voltage, which indicates that the electric charge travels exclusively in one direction. It typically transmits between 12 and 48 volts.

A battery inside the microphone can provide power; for example, the PG81 microphone (now discontinued) relies on a single AA battery.

Alternatively (and most typically), the preamp/mixer supplies DC power to the condenser microphones through the microphone cord.

The international standard is 11 to 52 volts DC (typical studio microphones run on 48v). Typically, your preamp will include a 48v switch that you can toggle on and off.

However, some older mixers may not accept phantom power. In this situation, an external adapter can connect the microphone and the preamp.

There are two types of microphones: Dynamic and Condenser microphones.

This is because condenser microphones are more sensitive and have an electrically charged plate.

IMPORTANT: While plugging and unplugging microphones, turn phantom power off to avoid any potential surges, general pops, and loud noises.

The Shure SM58 is designed to treat vocals and sounds with clarity; this cardioid dynamic microphone accurately reproduces everything. It also leaves a trail of background noise.

The Shure SM58 is a live vocal performance microphone that produces warm, clean vocals and music for all live performances, from the club to the recording studio.

So, does the Shure SM58 need phantom power? No, Shure SM58 cardioid microphones do not require it simply because it does not have any active circuitry to support direct current.

When Do You Need This Type of Electric Source?

Generally speaking, you only need this for older microphones. It’s how the microphone works. The Shure SM58 is a dynamic microphone, meaning it doesn’t need it.

Dynamic microphones may be considered self-powered devices with a coil and magnets.

The diaphragm creates electricity or an electrical signal by moving a coil around a magnet. That is how you get the signal into your music interface or computer.

How Does The SM58 Work Then?

To utilize this microphone, you can put it directly into an audio mixer.

As previously stated, the Shure SM58 is a dynamic microphone, so no phantom is required. Phantom power is entirely invisible to the Shure SM58.

Now the second way you might use this is with an in-line preamp, like the Cloudlifter, the FetHead, or the Dynamite.

How a Cloudlifter works is it converts the voltage for reduced gain. Powering this device will give you 20 to 25dB of clean gain for the recording microphones.

As you increase the gain on this interface, you will see that you’re getting to the same level before with about 25% less gain than we had.

So if you’re using an in-line preamp, you will need it turned on. However, if you’re connecting the microphone straight to your music interface, you don’t need it.

Nevertheless, if it happens to be on, it’s improbable that it will change the music, improve the audio quality or affect the recording microphone in any way.

Have a few more questions about the SM58 or phantom power?

Here are the most frequently asked questions about the topic:

No. Phantom power does not affect all dynamic microphones with a low impedance balanced output, such as the Shure SM58.

A dynamic microphone, such as the Shure SM58, does not require phantom power since it has no active circuitry. Only older models require this.

However, in most circumstances, using phantom power will not harm others. A professional dynamic microphone will not be broken by it.

Phantom power would not increase the volume if you did add it.

There are such things as unbalanced inputs, where you might get some buzzing sounds.

Because modern dynamic microphones are built to receive phantom power, we recommend talking with the manufacturer before connecting, especially if you have a ribbon microphone.

Should I Use a Pop Filter on Dynamic Microphones?

A pop filter is a filter that breaks the air created by the vocalist rather than allowing it to explode into the microphone.

The “proximity effect” is particularly beneficial for these microphones, even if they already have some form of filter built in.

You’ll receive the big, broad, deep vocal you’re used to, without the popping and hissing snakes in the lower frequencies.

They are typically available in two sizes, 4 and 6 inches, and are made out of either:

Place it 4 to 6 inches away from your microphone for the most excellent results.

A pop filter will filter out all frequencies before they reach the microphone, making it easier to edit all unwanted sounds and vocals from the recording later.

Another advantage of utilizing a pop filter is that it prevents moisture from the recording microphone, which will help your mic last longer.

Most are intended to attach to the arm of a mic stand, with a flexible gooseneck arm that may be moved in front of or away from the microphone.

Should I Use a Pop Filter on the SM58?

Because of its high SPL, the Shure SM58 is naturally more resistant to pops. They are designed to exclude background noise since it has an inbuilt filter.

However, many argue that the built-in windshield on an SM58 will not perform the job entirely because it is a fundamental filter.

The proximity effect typical of a Shure SM58 will give you the most significant results if you record in a studio, reducing background noise to a minimum and maximizing the vocals.

So, there is no right or wrong answer to this. We suggest you use a shield for Shure SM58 no matter what.

In any case, it won’t harm your vocals, although some engineers claim that nylon pop filters cause you to lack high frequencies.

FUN FACT: The SM58 was created for vocal applications, with a ball grille acting as an excellent P-pop filter. The SM57 was designed primarily as an instrument microphone with a lower grille size.

What Is the Difference Between a Dynamic Microphone and a Condenser Microphone?

Microphones are classified into two types: Dynamic and Condenser mics.

While both microphone types transform noise waves into voltage and deliver them to a preamp, the difference is in HOW this energy is transferred:

The Shure SM58 is a professional microphone that delivers clean vocals and has exceptional dependability and durability. It can withstand even the most demanding performances.

It does not require phantom power and is a must-have for all vocal and audio-recording applications.

While other kinds of dynamic microphones are available, there is a reason why the Shure SM58 remains a best-selling microphone decades after it was first introduced — it is simply the best.