Shure MV7 vs Blue Yeti: Which Microphone is the Best? 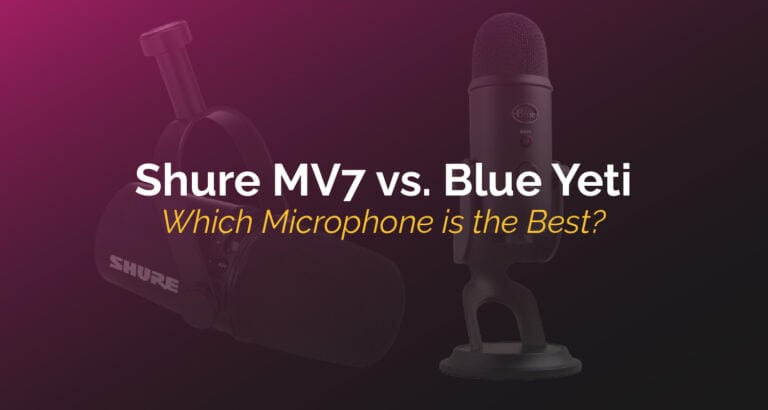 A lovely face and a perfect smile aren’t enough when starting as a YouTuber or streamer.

It is essential that you invest in high-quality audio, too!

Two famous microphones can take your content-making to the next level: Shure MV7 and Blue Yeti X.

In this article, I’ll bring you my in-depth comparison of the two devices so you can reach a hundred percent when you deliver STRONG audio performance.

Check out my discussion if you’re a professional streamer or a budding podcaster!

The Shure MV7 is a POPULAR CHOICE among podcasters and streamers because of its unique hybrid analog and digital connections.

Apart from that, it’s one of the most powerful mics that are simple to use. Almost anyone, regardless of skill level, can operate it!

Whether you’re a beginner learning the ropes of content creation or a seasoned veteran looking for something new during music recordings, Shure MV7 got you covered!

So, what makes this mic a well-loved item on most recording platforms? Check this out!

The Shure MV7 is a well-known front-address mic. It also has a dynamic capsule (with no metal meshing) that sits behind the screw-on foam pop filter.

I’m not sure why Shure chose a pop filter instead of a metal meshing to protect the dynamic capsule, but at least you can pick any pop filter color that matches your vibe!

This also features a cardioid pattern with a frequency range of 50Hz to 16kHz.

And unlike traditional mics that use a multipurpose knob surrounded by tiny LED lights, the Shure MV7 has a touch-sensitive panel.

This panel allows you to make REAL-TIME adjustments to your mic and computer audio, headphone volume, and the like!

Fortunately, the control strip has a lock function, so you can’t accidentally push any wrong buttons! How convenient!

In terms of port and USB connection, Shure MV7 has the following:

However, unlike the Blue Yeti X, the Shure MV7 does not come with its own stand.

After all, a standard mic can’t function properly without its own stand.

You’ve probably heard of Blue being associated with high-performing and powerful mics.

It has been producing excellent products for streamers, podcasters, and content creators of all skills and expertise for OVER 25 YEARS!

The Blue Yeti X is the crowd favorite among its wide range of microphones!

It has the excellent audio quality and sophisticated software that gets precisely what you want without using third-party plugins.

So what makes it stand out from the competition? Check out its main features.

Unlike Shure MV7, which has a front address, the Blue Yeti X is a side-address mic with an aesthetic that works well in many streamers’ setups.

It is also great to get a pure signal since it is DSP-free.

It comes in a two-tone style with a black body and gleaming silver accents. A metallic mesh grille is found at the top, while a multipurpose knob surrounded by tiny LED lights is located underneath the grille.

The knob is not as fancy as Shure, but it can be used to:

It must also be noted that Blue Yeti X can accommodate a 20 Hz to 20 kHz frequency range.

If you flip it around, you’ll notice a mic pattern button that lets you choose among:

You can connect the Blue Yeti X with a regular 3.5mm headphone jack or a USB cable specially designed for Yeti’s USB port.

Finally, this item has its own stand that you can use in TWO modes. You can either swivel it up and down or use it as a standard mic.

After going through the main features of both mics individually, let’s see how they perform side-by-side!

The build and design of Blue Yeti X are OUTSTANDING!

It doesn’t feel cheap or flimsy, and it doesn’t appear to break anytime soon because of its metallic mesh grille.

However, I should point out that it’s a MASSIVE gadget. It can get in the way if you use any accompanying desk stand.

The front-address Shure MV7, on the other hand, is solidly built with metallic housing that looks and screams of luxury.

Shure is also smaller than Blue Yeti X and has NO KNOBS, thanks to its touch-sensitive panel serving as a control strip with a lock function.

Both items have their own advantages for the build and design. It’s just up to you which of the two modes you prefer.

The Blue Yeti X is DSP-free and works with most recording platforms as a plug-and-play device. It also plays well with software called BlueVoice.

When you operate Bluevoice, it gives access to vocal effects and presets that can come in handy during music recordings.

The program is one of Blue Yeti X’s welcomed additional features since it upgrades the product’s DSP functionality.

The Shure MV7, on the other hand, can be played with software called the Shure Motiv app.

This app allows you to do MORE with the MV7, such as fine-tuning the monitor mix or making real-time adjustments.

One of the app’s additional features is the variety of options in tone and EQ presets. This program may also be used on a computer or a mobile device.

The Blue Yeti X provides FULLER sound than its DSP competitors because it’s a DSP-free mic. More lows, mids, and high-mids can come through quickly.

It is also adaptable, thanks to its WIDE SELECTION of mic patterns.

Suppose you go through its mic pattern button. In that case, the omnidirectional pattern is ideal for recording ambient sounds in your environment.

At the same time, the cardioid mode gives a clean and clear sound recording with a higher low-frequency response.

Honestly, the fact that this mic also features stereo mode is remarkable!

The Shure MV7 is VERSATILE in its own right!

You can switch between using a pro-gear XLR setup to a USB connection or headphone jack with this mic.

So whether you’re at home or in the studio, you can quickly adapt to your needs!

However, if you regularly switch between these two connections, use the DSP-free mic as little as possible to maintain the recording environment.

Altogether, both the Blue Yeti X and the Shure MV7 are dynamic microphones with EXCELLENT audio quality. It’s up to you which one would suit your needs.

The Blue Yeti X is the clear winner in this category.

Although Blue Yeti is known for making stylish yet VERY expensive microphones, fortunately, the Blue Yeti X isn’t one of them.

It’s even less costly than the Shure MV7!

If you’re searching for a high-performing gadget that won’t break the bank, consider the Yeti!

What Is a Recording Pattern?

It refers to the capacity of the mic to capture sound from various directions [R]. There are two common mic patterns:

Do You Need Cloudlifter for MV7?

Nope! A Cloudlifter is often needed to boost the signal of your mic.

However, you don’t need to go through this hassle with Shure MV7. It has EQ presets and compression settings managed by its MOTIV app once connected through a USB.

What Microphone Is Comparable to a Blue Yeti?

The Fifine K678 is a miniature Blue Yeti X.

The only significant difference between the two is that Fifine uses a cardioid mode unlike Yeti, which has several presets.

However, if I were to pick my no. 1 choice, I’d say Blue Yeti X is the winner.

It was a fierce competition between Blue Yeti X vs. Shure Mv7. The only reason I opted for Blue Yeti is because of its affordable price yet jam-packed features.

It is cheaper than MV7 but still offers dynamic performance.

Moreover, if you’re looking for a pure signal, the Blue Yeti X would be a better choice since it’s a DSP-free mic.

If you’re still a rookie podcaster or a recording professional, you can never go wrong with the Blue Yeti X! It’s budget-friendly and offers multiple features you can explore.

However, if you wish to AVOID THE HASSLE of switching between analog and digital connections, I suggest giving the Shure MV7 a try.

And that’s a wrap!

Hopefully, you found the best microphones for you to give a hundred percent performance!

Remember that popularity can’t be the only reason to buy a microphone for your recordings. It would be best always to consider your level of expertise and needs.