NT1 A vs NT1: Which Rode Microphone is Best for You? 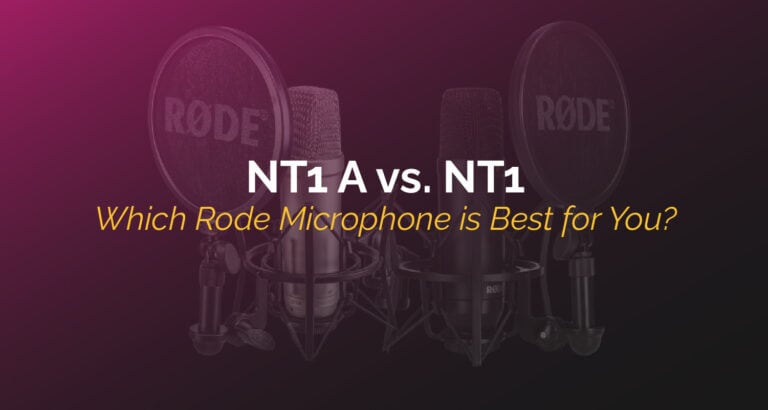 Choosing a mic for you is usually a hard decision. There are a lot of choices for mics out there at different price points and purposes.

But somehow, it’s harder to narrow two mics down, even if they’re from the same makers.

Rode NT1 vs NT1A? It’s a win if you go with either, but which one is the BEST for you?

As you may have guessed, the NT1-A is what you may call something of a spin-off to the original Rode NT1; a newer version of the Rode NT1.

It has a tweaked frequency response, a different color, and a few other differences it has compared to the original mic.

Let’s see what the Rode NT1A has to offer.

The Rode NT1A is a cardioid polar pattern microphone.

This means that you can only get a good sound out of your mic in a fan shape in front and at the sides of the microphone.

It has a sensitivity of -32dB, meaning that if you want to use this mic to pick up isolated sounds, like vocals or acoustic guitars, this is a good choice.

It also has a self-noise of only 5dBA. This line of Rode mics is known for being very quiet.

As you can see on the graph above, the frequency response is at 20Hz-20kHz, and its sound is a little colored.

The frequency response of this mic makes it pretty bright sounding, which is good for giving that EXTRA PUNCH to guitar recordings and such!

The Rode NT1A is a full metal construction microphone in terms of build quality.

Even the grille on the top is a metal grille. It feels very sturdy and weighs around 326 grams.

Its output is an XLR and does come with an XLR cable in the box.

Speaking of what comes in the box, an SM6 shock mount is also included, which will allow you to attach it to a mic arm of your choice.

The mount also comes with a pop filter, so you get a full package in one box.

You would also need an audio interface with phantom power to properly use this microphone. There’s also a convenient dust cover that comes with the Rode NT1A.

I mentioned earlier that the Rode NT1A was a retuned remake of the original Rode NT1. However, the Rode NT1 in stores is an UPDATED version of the Rode NT1A.

So what is the difference between the two microphones?

Well, other than the Rode NT1 being black, there are a few differences regarding the sound of the microphone.

The Rode NT1 is a cardioid polar pattern microphone like the previous microphone.

It has a sensitivity of -29 dB. Not as low as the Rode NT1A, but still at a good level!

This line of microphones is well-known in the recording industry for having incredibly low self-noise, and the Rode NT1 is no exception.

The Rode NT1 microphones have a frequency range of 20 Hz – 20 kHz, as you can see from the graph.

The frequency response is also quite flat in comparison to the previous graph.

It provides a flatter sound, and there’s a very insignificant slight low-end roll-off. For this mic, it means that:

The build quality of the Rode NT1 is also SOLID!

It’s an all-metal build right up to the mesh grille of the microphone. It weighs just a tad bit heavier at around 395 grams.

The output is also an XLR, and there is an included XLR cable in the box. It also comes with the SM6 shock mount with the pop filter.

You would also need phantom power to use this microphone properly.

Now I know the general information about these two microphones, let’s compare them against each other.

Let’s take a look at which one of these microphones is worth a place in your recording setup.

The two are very similar in this regard as they both come in the same all-metal construction.

Some people may feel that something heavier may mean more was packed into a product.

However, that doesn’t necessarily mean much.

Also, there’s not much fear of physical damage when it comes to a mic that you will just mount on a mic arm for 90% of its life.

They’re both also very, very similar when it comes to usage.

They’re both cardioid mics that sound the best when you speak into them from the front.

They also both require 24V and 48V power to work properly.

You also need an audio interface and connect to said interface via an XLR cable. They also provide the shock mount and pop filter.

There are few differences between the two mics on the previous two fronts, but we’ll see where differences lie in the next two aspects!

This is where you can find worthwhile differentiation between the mics.

Let’s first start with the noise.

The Rode NT1 has lower self-noise compared to the Rode NT1A. However, that win is won only by 0.5 dBA, a very small, arguably indistinct, margin.

For me, this difference is not too noticeable. But still, if you are very particular with the numbers and specs, it may matter to you.

Again, a small margin, but it may matter to you.

But, in my opinion, the biggest difference they have, sound-wise, is in their frequency responses.

Rode NT1A’s frequencies are tuned to have a brighter high-end and would give more character to certain recordings, such as recording an acoustic guitar.

However, this strength can also be a flaw. While the NT1A sounds great, it may be TOO bright for some situations, like recording female voice-overs.

Rode NT1 mics, on the other hand, are a lot more balanced.

Their frequency response is a lot more neutral, which allows it to be a better choice for many situations; it’s a lot more versatile!

When it comes to the price difference, the NT1A is cheaper in comparison to the Rode NT1.

But, and you’ll start to notice a pattern here, it’s a marginal difference at best:

When you’re looking to invest in something, that is a negligible price difference.

There are A LOT of things to note when choosing mics. Whether it’s to record voice or instruments, there is a lot to know about shopping for mics.

Here are a few questions you may have in your mind while you’re doing your pre-purchase research!

Which Type of Mic is Best for Vocals?

When shopping for mics, you usually want to match the mic with a certain person’s vocal qualities.

Emphasize the good and minimize the bad!

When looking for mics that are best for male vocals, that usually means you want mics that can emphasize the lower frequency range or, at the very least, don’t lower these frequencies.

What is a Professional Condenser Microphone?

A condenser mic is simply a microphone with a condenser capsule acting as the medium where the soundwaves you or an instrument produces are converted into an electrical signal.

Most condenser microphones also require phantom power which leads us to the next section.

What is Phantom Power?

Simply put, it is the power that allows your mics to work properly. Certain mics need power, and usually, these mics are condenser mics.

You’ll usually see a “48v” button on your audio interfaces. This is what activates that power.

“Why is it called phantom?” you may ask.

Phantom just means that the power is delivered using the same cable that also carries the audio signal.

What is Very Low Self-Noise?

Self-noise just means the amount of noise that a mic makes by itself.

On low-quality mics, for example, mics on a cheap headset, you’ll hear static even when it’s not picking up any audio.

So if you want clean recordings, aim to have lower self-noise mics.

Alternatives to Rode NT1A and NT1

The Rode NT1 vs. NT1A discussion focuses only on two microphones, albeit very good ones.

There is a whole world of mics out there that you might miss by focusing only on those two.

If you’re looking for something else that the previously mentioned units don’t offer, many choices may cater to your specific needs.

The Audio Technica AT4040 is for people who prefer a slightly brighter Rode NT1.

While it’s not as low noise as those mentioned above, it does have one point that the previous doesn’t.

The AT4040 has a bass roll-off switch and a 10 dB pad if you’re looking to make on the fly changes to how your mic sounds.

It also comes with its own shock mount, but it doesn’t have a pop filter and costs around $300.

The Lewitt LCT 440 Pure is another bright tuned mic; it’s not too much high-end, though, just a smidge.

It’s also a cardioid microphone, and it comes with a filter, a mount, and a carry bag and comes in at just 270 USD.

This one is tuned similarly to the NT1A. However, it’s priced much CHEAPER than the NT1A at around $150.

So if you prefer how the NT1A sounds and your only issue is the price, give the AKG P220 a try!

There is no clear winner in a Rode NT1 vs. NT1a fight.

There’s not much to complain about picking, either. Recording studios love these mics for a reason, and for me, EITHER will do fine!

The bottom line is that if you mainly record guitar, the bright tuning of the NT1A will give more punch to your recordings.

On the other hand, if you want to get a more VERSATILE mic that will see usage in various situations, the NT1 is your choice!