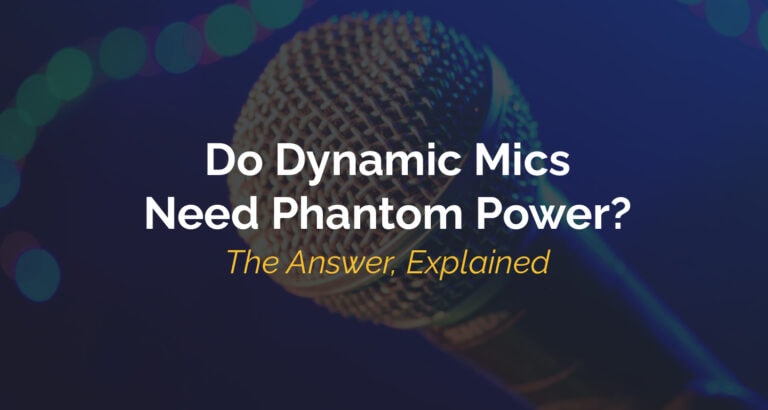 You may see a button for “Phantom Power” on your audio interface or mixer. Some microphones need it to work.

This may lead you to wonder if your dynamic microphone needs phantom power, too.

So, to answer the question, “Does dynamic mic need phantom power?”

No, it does not. A dynamic microphone does not need this because its design does not have active circuitry.

Phantom power will NOT change how your dynamic microphone works, nor will it destroy your microphone.

A dynamic microphone DOES NOT need phantom power to work.

Its main parts only include its diaphragm, coil, and permanent magnet.

The way it operates does not need any electric charge between the diaphragm and its other parts to produce a signal output.

The only power that it needs is external, which is the one your audio equipment supplies. It does not need any power within its design to work.

The straightforward design of dynamic microphones makes them suitable for crude purposes. They can capture loud noise and strong sounds better and easier.

They are more fit for live performances because of this.

Phantom power is the process of delivering an electric charge, specifically a direct current, within the body of a mic. This current is generally referred to as DC.

This charge goes through the microphone cable and powers active electronic circuitry within its components. Without this, an audio device that needs it cannot function or produce any signal output.

It is commonly a power source for microphones, external audio interfaces, audio recorders, and video cameras.

DC flows through conductors, which include wires, semiconductors, insulators, and vacuums.

When it comes to microphones, the DC results in a charge to the small metal plate or backplate. This charge triggers a movement in the diaphragm to operate the microphone.

An audio interface, mixer, or any audio equipment may also label phantom power as 48v instead of its common term.

How much phantom power a device needs can range as low as 9 volts to as high as 48 volts. This is the reason behind its 48v labeling.

How Do I Know if a Microphone Needs Phantom Power?

You may have several microphones in front of you, and you may not be sure if the one you are holding needs phantom power to work.

There are two ways to find out if it does.

First, know the microphone type that you have. It may be a condenser, dynamic, or ribbon type.

Condenser microphones NEED phantom power for them to function. The other types do not. They can completely function even without this power source.

If you do not know how to identify the kind of microphone you have, you can test manually.

Plug it into a piece of audio equipment without phantom power.

Turn your microphone on; if it does not work, it may NEED phantom power.

Make sure that your microphone is not defective in the first place. If it is, it will still not work even if it is plugged into other audio equipment with phantom power.

This type has a more complex design. It is made up of a diaphragm, backplate, battery, and resistor.

Most diaphragms are thin pieces of either metal or plastic. The diaphragm precedes another small metal plate. Because of its location, the second plate is referred to as the backplate.

This is where phantom power comes in. It powers BOTH the diaphragm and backplate to produce the direct current between them.

This creates an electric charge that translates into an audio signal as your audio outlet.

Phantom power can come from many different sources. A microphone can be powered by a built-in battery, such as in the diagram we have.

The most common source is the audio interface or mixer, which has an on and off switch on it.

Aside from creating a charge between the diaphragm and backplate, the phantom power can also activate other active circuitry in a condenser microphone.

An example is a pre-amplifier, which is commonly called a pre-amp. It strengthens weak electric signals for additional processing. This prevents unnecessary noise and results in cleaner output.

The answer is no; it will NOT cause damage.

Dynamic microphones do not require phantom power for their function. Applying phantom power to them will not result in any harm either.

It may be easy to imagine how supplying extra power, more so an electric charge, to a device that does not need it could cause damage.

Fortunately, most dynamic mics available in the market today are durable enough to operate with this type of power within their body design.

They do not make use of this additional power in their operation.

No damage results from the unnecessary power, thanks to balanced XLR cables. Allow us to be technical here.

Imagine that your microphone has the standard XLR cable, which it most probably does. Phantom power is usually at the standard 48 volts.

Voltage only flows if there is a difference in the amount in the two pins.

In this case, there is none. Phantom power will not result in any change or damage to your microphone because the voltage will not flow.

Most, if not all, models are safe, but it is best to double-check for older models. You can verify through the information its manufacturer provides.

What Happens to the Dynamic Mic When Applied With Phantom Power?

You may experiment and have your dynamic mic plugged into an audio interface with phantom power.

Unfortunately, pressing that mysterious 48v button on your interface will not make any difference to the audio quality that your microphone will produce.

All the circuitry will only work the same! The sound you will hear will be THE SAME before and after you switch the 48v button on.

Your microphone system has a balanced XLR cable. It will make sure that your microphone and its audio quality are untouched and stay the same.

Yes, they may sound better because of better higher audio quality.

Phantom power operates a condenser microphone. This type of microphone has a more complex design.

Let us start with the first part that audio waves hit, the diaphragm. Its diaphragm is very thin. Because of this, it can capture even the slightest change in frequency.

If you are recording music, condenser microphones will allow you to translate clearer and more exact sounds.

This is why they are more commonly used in recording studios. They can pick up more details in instrument sounds and vocals.

It DEPENDS on the setting and what sounds you want to capture.

Both of these microphone types have their corresponding advantages and disadvantages. Which type you should use depends on the purpose you are trying to achieve.

A condenser mic can pick up even the smaller changes in frequencies.

It gives more CLARITY and definition to studio vocals and instrument sounds. It is fit for recording studio environments.

This is because of the more intricate design of condenser microphones.

For the same reason, a condenser microphone is more fragile than a dynamic type and can be easily damaged. A studio setting can also preserve a condenser mic better.

They can withstand stronger sound pressure. Because of this, they can handle loud noises and strong sounds, such as loud vocals and drums.

The design of dynamic microphones is simpler. It makes these types cheaper and more durable. They are more suitable for rough use, such as in live settings.

That wraps up this guide on phantom power!

Dynamic mics can function fully and well even without phantom power.

It has a straightforward design that does not have any active circuitry. It does not require phantom power within its body to produce an audio output.

It can accept phantom power, but it will not change anything. It will not damage the microphone either.

So if you have a condenser microphone, it will GREATLY benefit from phantom power, so make sure to turn it on when you record!

Good luck with your recording!