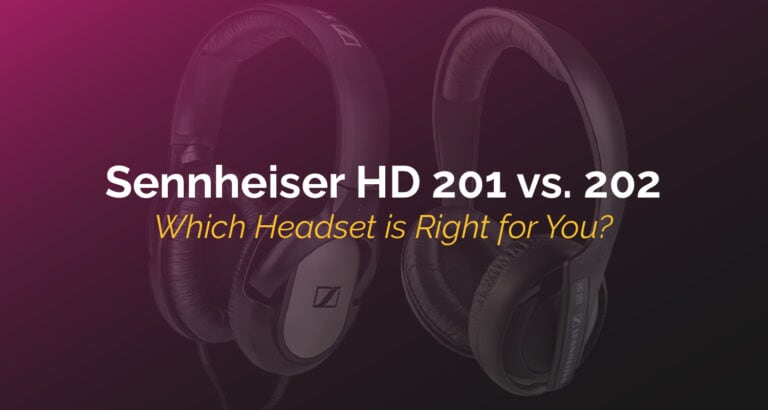 Listening is never a one-way street, whether for a virtual meeting, a gaming stream, or a podcast binge.

Because ultimately, you hear through your sound device before it reaches your ears.

Let’s talk about the two high-quality over-the-ear headphones that work great with their built-in features!

Budget-friendly, relatively durable, and gets the job done. Its built-in features allow your ears to experience good sound quality.

Let’s talk about the specs and features that define the performance of these headphones.

This allows audio equipment you have to realistically reproduce the audio that’s coming from your sound source (e.g., computer).

Headphones with good built-in dynamics tend to have a better dynamic range which entails the quietest and loudest sounds coming from your sound source.

Impedance is the overall resistance of a device to the electric current coming from the present amplifier from all involved devices.

Like the human ear, sensitivity is determined by how much pressure, particularly the loud and more explosive beats your audio device can take in.

This pertains to the range of frequencies, from the low (bass) to high (treble) frequencies, that it can reproduce.

Total harmonic distortion (THD) is the overall difference between the audio signal coming from your audio source and all produced distortion of the involved devices.

So the lower the THD rating of an audio device is, the better!

With the HD 201’s THD rating of 0.7%, there is minimal difference between your audio’s original texture and the reproduced audio texture coming from your headphone.

Deemed as the ideal partner for DJs who mix and edit various amazing modern music, let’s talk about the features and specs of the HD 202!

Similar to how we started our detailed look into the features of the 201, let’s first go through the specs that allow the magic of the HD 202 to happen.

Like the prior headphone in question, the HD 202 also has a dynamic design that allows it to easily reproduce your audio’s quiet and loud frequencies.

Having a higher sensitivity rating than the 201 means that the 202 can more accurately reproduce even the explosive sounds that the user chooses to play.

Sometimes our audio devices can’t pick up on all of the frequencies present in the audio that we play.

The 202’s wider frequency response range and its overall capacity to accurately reproduce how the original audio sounds are sustained.

The lower the THD, the better.

With the 202’s THD rating of 0.5%there are fewer chances that your audio will get affected by distortion.

Now, it’s time to see which would personally fair better for you between the Sennheiser HD 201 vs. HD 202!

Both the 201 and 202 have a closed-back design, meaning that they were designed specifically to block out external noise.

Some users have reported that the 201 has the more snug fit.

But we do recommend considering the general size of your head and ears.

Several customer reviews have also mentioned how the 202 fits tightly because of its smaller earpads than the 201.

Ultimately, it all depends on the fit that you personally prefer.

Despite having similar features and specs, the 202 is the better one between the pair.

This is because it has higher impedance and sensitivity, lower THD, and a wider frequency response range that puts it higher than the 201.

Of course, there is a noticeable price difference between the two.

NOTE: The prices may vary depending on where you buy from.

Let’s talk about some of the questions you may have in your head at the moment.

Will It Have A Warranty?

Are The Cords Detachable?

Nope! The cords are NOT detachable despite looking like they are.

Will The Pads Cover Your Ears?

If you have relatively average or bigger ears, the pads will only rest on your ears.

What are the Main Differences?

As discussed earlier, the pair has slight differences when it comes to their:

What’s more, there’s also a noticeable variation in the price points of the devices.

How Do Noise Cancelling Headphones Work?

With Active Noise-Cancellation (ANC) technology, noise-canceling headphones generate a phase-inverted sound that cancels out the noise detected by the built-in microphone.

If you think neither the 201 nor 202 fit your taste, you can check out these alternatives!

Final Verdict: Which Headphone is Better?

Despite the factor that personal preference plays in the final verdict between the HD 201 and HD 202, the latter (202) is more capable of more accurately reproducing audio or music.

But, there’s also the fact that the 201 is less pricey.

Ultimately, if it’s just for casual everyday use, the 201 may be the better choice.

But if, say, you or your friend hope to mix, edit, or do professional work with either of the audio devices, then the 202 would be the better choice.