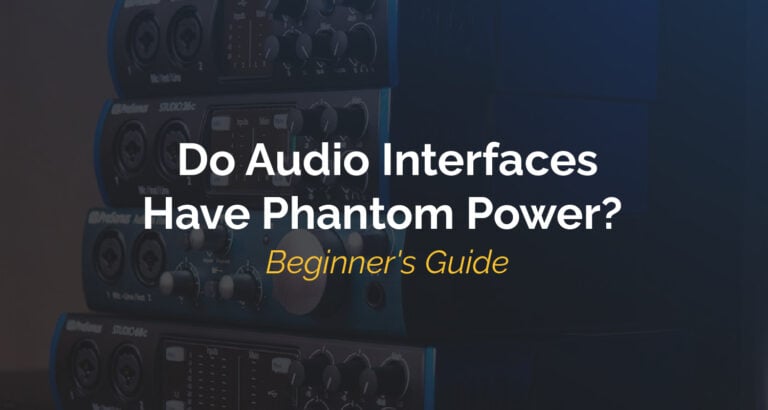 You may have noticed another power button in an audio interface besides its main switch.

Most, if not all, audio interfaces have 48v phantom power built specifically in them. Many devices need it to work its function, especially in a recording process.

Let us brief you on the relevance of a phantom power audio interface and other related topics that focus on this.

An audio interface is one common piece of equipment that can provide phantom power.

The majority of interfaces available in the market already have built-in phantom power. This is why many users sometimes interchange both terms.

An audio interface has many functions that help other musicians mix and record music. This is usually possible as you connect to a computer.

Microphones are essential for recording music. An audio interface has the phantom power setting to operate most recording microphones.

The phantom power setting appears as a button on the channel strip that may not be directly labeled as it is. Most interfaces have it labeled as 48v.

48v stands for 48 volts. It is how much direct current an interface delivers. This electrical current travels through the device cable, which is commonly an XLR cable.

It is described as a phantom because it is not clear that power is transferred. There is no special cable for it.

Direct current travels straight through pin 2 and pin 3 of the XLR while pin 1 is the ground.

Phantom power is the supply of an electrical charge to a device, usually within the body of a mic. This electric charge is a direct current, which is referred to as DC.

Other than a microphone, it can also power an external audio interface, audio recorder, and video camera.

On the other hand, an audio interface, DI box, mixing console, and personal computer are common phantom power sources.

The electric charge goes through the cable of a device and powers active electronic circuitry within its parts. A device needing it cannot operate and produce sound output without it.

It comes in 9 to 48 volts, which is why most devices label phantom power as 48v.

What Is a Direct Current?

Direct current (DC) refers to the one-directional flow of electrical charge through a conductor.

The flow remains in the same direction throughout. Its amperage does not change along with its direction.

Its counterpart is an alternating current (AC) in which the flow reverses direction and changes magnitude.

The common conductor of direct current is wires found within a cable. Its other conductors include semiconductors, insulators, and vacuums.

A direct current produces an electric charge in the backplate of a mic. As a result, it causes a movement in the diaphragm.

This type of mic needs an additional power source within its body for its components to function.

Phantom power is not difficult to create. This is why there is no specialized device that serves as a source of phantom power.

It is simply incorporated into audio interfaces, mixers, and DI boxes.

A condenser microphone has an elaborate design. It has a very thin diaphragm, which can detect smaller changes in frequency.

This produces more CLARITY and ACCURACY in the sounds you capture. Details in the vocals and instruments are captured better!

Without a phantom power supply, true condenser microphones cannot function at all.

What Are the Different Types of Mics?

All microphones are for recording vocals or sounds, but different microphones can capture different frequencies. This translates to different resulting sounds.

There are three main types of microphones you can use depending on the sound you are recording and the sound you want to produce.

What Are the Functions of an Audio Interface?

Phantom power is only one button and, therefore, only one function of an audio interface. It has the following other functions.

An ordinary sound card in the computer is not built specifically for producing music. It is multipurpose and, thus, not specialized.

Meanwhile, the sound card of an audio interface is specially designed for music production. It produces higher sound quality, which complements its built-in preamps.

This enhances the resulting sound of recordings and instruments.

Latency is the time delay in reading an audio signal during a recording process. Latency issues stand in the way of recording music smoothly.

An audio interface decreases latency by a few milliseconds. This already makes a huge difference and improvement to your recording experience.

Adjustment and Mix of Input Levels

An audio interface can operate with many audio inputs. As such, it can function as a mini audio mixer for multiple microphones.

The input levels of an audio interface allow you to record vocals with one microphone and record guitar with another.

It comes with level-setting knobs and sliders that allow you to adjust the volume of the specific microphone it is connected to.

It includes support for studio headphones for better listening to live recordings. Another common support is for speaker outputs.

This can serve as a good connection point for studio monitors.

Phantom power will not damage audio interfaces, but it can risk damage to a microphone.

Most interfaces are designed with phantom power, so there is no risk of damage there.

Phantom power is necessary to operate a condenser microphone. Without it, this type will NOT work at all.

It will not damage or make any difference to the operation and result in a dynamic microphone. This type is generally an XLR mic and comes with a balanced XLR cable.

This cable prevents damage even with an added charge.

Ribbon microphones are a different story. They are more sensitive, and adding phantom power risks damage to them.

What Is the Difference Between Audio Interface and Phantom Power?

Both terms are commonly intertwined, but they are separate from each other.

Phantom power is a feature of the equipment that is the audio interface. The former is NOT an alternative to the latter.

Condenser microphones need an added charge in the form of phantom power to function. An audio interface is a common and easy source device for this.

Other sources include mixing consoles, DI boxes, and sometimes, batteries.

Why Does a Condenser Microphone Require a 48v Phantom Power Supply?

The components in the design of a condenser type contain active electronics. They need additional power within its body to operate.

Its function requires a direct current to charge its backplate to cause a movement in its diaphragm. This is the ONLY way for the condenser type to work.

Without the added charge, it will NOT function at all.

However, its supply does not necessarily have to come from an audio interface. Its supply comes from the USB cable.

Phantom power runs through the USB cable itself, and an audio interface is not necessary to operate this condenser type.

It helps to know the type of microphone you are dealing with to know its operational requirements.

It has many functions in recording music. The additional power it provides is critical in operating condenser microphones.

This type of microphone can detect even the slightest change in frequencies. This allows you to record clearer and more detailed sounds to produce more sophisticated music.

Regardless of the kind of music you want to produce, audio interfaces enhance sound quality.