Focusrite Scarlett Solo vs. 2i2: Which One Is Better For You? 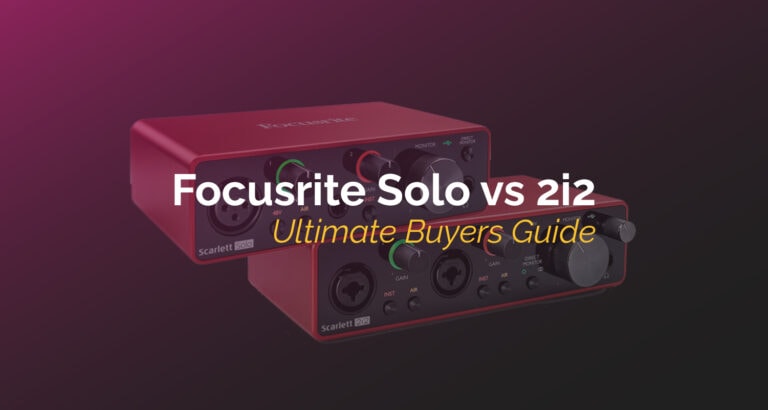 So, you’re looking for an audio interface to help you record quality audio at home, eh?

You’ve been searching the internet, reading articles for some recommended products, and going to page 2 of Google so that you can find one you like.

At last, you’ve narrowed down your devices to Focusrite’s Scarlett Solo or the Scarlett 2i2.

To help you make your choice, I’ve looked at these two audio interfaces. Let’s see how they hold up in this post!

First, I’ll shine the spotlight on the Solo, the cheaper audio interface between the two devices!

Although it’s about 50 USD cheaper than the Scarlett 2i2, is it any good?

The Scarlett Solo has a lot of features to it that won’t disappoint those who buy it! Let’s get into the specs:

As with the rest of the Scarlett series, you can only find the Solo in its signature RED color.

The interface is wrapped in lightweight, compact aluminum.

Its front and back panels are both made of plastic, but don’t worry, because they don’t look or feel cheap at all!

The buttons on the interface don’t feel like they’ll sink in after just a few presses, and the knobs feel well-secured.

All the ports take in cables pretty well, so you don’t have to constantly check whether your cables are slipping out.

Performance-wise, I can’t complain about the quality of sound it produces!

Although you can only record with one microphone and one instrument at a time, it still delivers what it promises: GREAT AUDIO QUALITY!

What sets the Focusrite 2i2 apart from the Solo? Is it anything substantial?

Join me and find out!

For the features of the Scarlett 2i2, there is no noticeable difference from the Solo.

The Scarlett 2i2 and Focusrite Solo’s build quality are almost the same.

The only difference between the two is that the 2i2 is larger and weighs a bit more than the Solo, because it has more knobs.

However, that doesn’t mean you can’t bring your 2i2 when you go out to travel!

When it comes to performance, there isn’t much difference between the Focusrite Solo and Scarlet 2i2!

The Scarlett 2i2 is a high-performance audio interface that allows you to create quality recordings, whether you’re a singer, voice actor, podcast host, or instrumentalist.

The Showdown: Which Focusrite Interface Is Better?

Both audio interfaces have the same technical specs, more or less, but there are some differences.

Direct monitoring with the Solo and 2i2 is possible by plugging your headphones into the interface while your performance is ongoing.

Monitoring with either interface won’t be a hassle if you’re keen on nitpicking all the small details. I hardly noticed the delay at all.

However, the Scarlett 2i2 offers less delay than the Solo.

There are also LED lights on both interfaces.

The Solo has one microphone input for an XLR microphone and another ¼ inch jack, which you can find by spotting the guitar sign above the port.

That way, you can use a microphone and guitar simultaneously!

On the other hand, while the Scarlett 2i2 has the same number of line inputs, its inputs are multi-functional.

I say multi-functional because the inputs will take both XLR connectors and ¼ inch jack cables all the same.

The Scarlett 2i2 also allows inputs to take in line-level signals if you want to.

The line outputs of both the Solo and 2i2 are located at the back, going to the left and right studio monitors/speakers.

Unfortunately, both interfaces do not support MIDI devices.

However, the Scarlett 2i2 has a dedicated volume control knob, so you don’t need to rely on the monitor controls to change the headphone output.

It’s also worth mentioning that the 48V button allows the interface to use phantom power, allowing you to use condenser mics if you want to.

Because of that, the 2i2 gains a slight edge over the Solo!

I was pleased to find that both interfaces support sample rates and a frequency response of 24-bit/192kHz for amazing sound quality.

That way, you won’t have a problem recording studio-quality songs or intricate guitar work with either audio interface.

If you want, you can also turn on both the Solo and Scarlett 2i2’s Air Mode to add a BRIGHT and CRISP note to your recordings!

You can activate Air Mode with the Air button found in front of both Focusrite interfaces.

The two audio interfaces both support low latency, but the 2i2 offers a marginally smaller amount of latency than the Solo.

Does it matter, though?

In my experience…not really. The latency is low enough with both interfaces that it won’t make a noticeable difference.

So unless you’re an audiophile who looks for the difference in latency, you won’t notice it.

The difference between both audio interfaces widens with the number of preamps they have and how they function.

The Solo has TWO preamp types: one XLR and one ¼ that CANNOT be interchanged.

However, the Scarlett 2i2 has FOUR preamps: two XLR inputs and two ¼ inputs that CAN be interchanged.

It’s plain to see that the 2i2 allows for a lot MORE VERSATILITY than the Solo when it comes to recording.

Say goodbye to the days of scrambling around your set-up to find an extra socket for your audio interface!

Both the Solo and 2i2 can be powered through a USB port on your computer, and you’ll be able to start recording in your home studio.

This is better than a USB-B type connection because USB-C links data FASTER than the former.

Based on the build quality of the two audio interfaces, I can say the Focusrite Solo and 2i2 are built to last!

So long as you don’t drop your interface from a 20-floor building, it should be fine for years to come.

You won’t miss out on anything if you get one over the other. You’ll get the same software if you choose either of the Focusrite audio interfaces.

Focusrite will provide you with a copy of these programs:

These are great recording programs as they are intuitive, easy to use, and easily customizable to suit your taste!

But if you’re a beginner, I recommend starting with Ableton Live Lite!

Focusrite’s Scarlett Solo and Scarlett 2i2 are compatible with most DAWs on the market.

You can easily integrate both interfaces with most DAWs with the help of their guides!

So, what do the Focusrite Solo and Focusrite 2i2 work with?

There’s no need to sell your computer if it’s from Apple or vice-versa, as both interfaces work just fine with either Mac or Windows!

Verdict: Which Interface Is Best For You?

That wraps up this Scarlett Solo vs. 2i2 showdown, and now, I need to announce a winner…kind of.

I’d recommend the Solo for artists who only need their own voice and an instrument for their recording sessions.

It still offers the same quality as the 2i2 and is definitely worth your time!

However, if you’re planning to record with multiple people, pick up the 2i2 instead!

It might also be a great choice for solo recording artists who can shell out some extra money just for those extra features.

There isn’t much difference between the Solo and the 2i2. It’ll ultimately depend on your available budget and how serious you are about recording!