Behringer U-PHORIA UMC202HD Review: Is It Really Worth It? 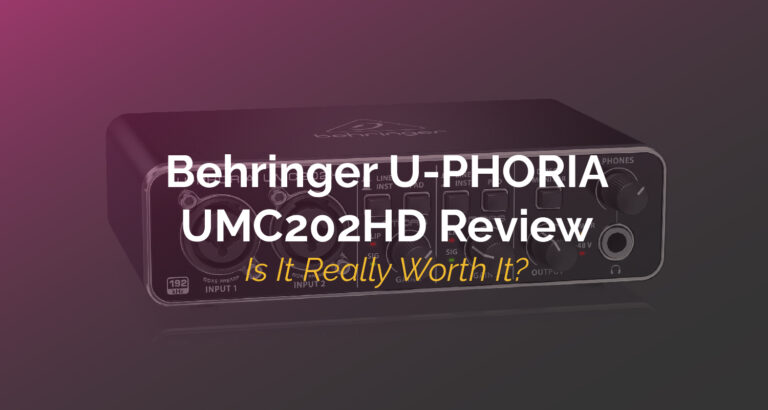 Are you starting a career in music? Do you want to do some voice-over work for video games?  Planning on creating your own podcast?

The Behringer U-PHORIA UMC202HD, aka the best budget “studio in a box” for some, might be the audio interface you’ve been looking for.

But is it really all that it’s cracked up to be?

In this review, I will talk about all you need to know before buying one for yourself.

It’s an audio interface that allows you to record like a pro, even if you’re on a budget.

When I mention “budget audio interfaces,” you’d normally think of products and brands like the M-Audio M-Track Solo, Focusrite Scarlett 2i2, or Steinberg.

But the U-PHORIA UMC202HD steals the spotlight for Behringer.

It boasts numerous features and things (which I’ll discuss below) that can give you a crisp sound quality, an intuitive user interface, and an extraordinary overall user experience.

This new Behringer interface stands out to me because it gives unparalleled pro features at an affordable price.

From the exterior to the interior of this USB interface, you can tell that Behringer went all out to bring professional-grade quality to a budget, beginner-friendly product.

If you’re still on the fence about getting the UMC202HD for yourself, the features below might be the push you need.

Just because this interface is cheaper than most doesn’t mean it’s fragile!

Made with an impact-resistant metal chassis, you won’t have to worry about accidentally damaging the device.

Its compact construction makes it a handy and portable tool for making records on the go. It’s also perfect for moving between studios in between steps, like recording and editing.

However, I should mention that the buttons and knobs are made of plastic.

It doesn’t compromise the build quality, though, since both the buttons and knobs are considerably sturdy.

Behringer touts UMC202HD 2-channel USB cable as “blazingly fast,” and claims that it’ll have you making your next hit within minutes!

Their claim is easy to back up, thanks to the various ports available for your microphone, electric guitar, keyboard, and headphone jack cables.

This makes the model truly versatile. You can use it for multiple purposes, like recording vocals through the interface and setting it up to record different instruments.

Since it’s a USB audio interface, the device also comes with a USB port and all the cables you’ll need, plus a USB port for easier connections.

Two things I like about the UMC202Hd are its studio-quality 24-bit audio and max rate of 192 kHz resolution.

They’ll give you a more PROFESSIONAL experience. With this, you can get higher-quality audio records.

Even if you’re recording music at a very low decibel, you’ll still get that sharp and crisp sound you’ve always wanted.

NOTE: You can also play with the settings and switch to 48kHz or 42kHz or any rate you desire.

The genuine Midas-designed mic preamps set this unit apart from other audio interfaces.

People in the music industry know that Midas preamps are one of the BEST mic pres out in the market. With them, you can pick up ultra-clear sound with plenty of headroom.

But Behringer didn’t stop there in making this model top-notch.

These preamps include a +48V phantom power switch, allowing you to use condenser mics.

The unit also has one dedicated switch for enabling or disabling phantom power through the XLR contacts found at the back.

Unlike other budget audio interfaces, the UMC202HD takes the spotlight when it comes to sound quality.

With a bit depth of 24-bit and a sample rate of 192 kHz plus the genuine Midas mic preamps, you can record crystal clear vocals at different volume levels – even as low as -18 decibels without getting other noise.

I’m pretty impressed, considering this is a budget audio interface.

The interface is made with a full metal case which isn’t indestructible but surely provides more than enough protection compared to ones made of plastic.

What’s more, the knobs and controls work SMOOTHLY. However, they’re made of plastic which looks and feels cheap.

But for the price, Behringer surely had to skimp on something, right? Besides, from my usage, the plastic controls still work fine.

There’s another reason why this interface is ideal for beginners in music production, and that’s the software it comes with.

The software bundle comes with Traktion’s Waveform Pro, an immensely user-friendly DAW that works well with most operating systems.

It also comes with a step clip editor, which allows you to work efficiently with multiple sound clips on the track.

Aside from that, there are over 100 instrument and sound effect plugins available for you to download.

With so many options, it’s impossible not to find one that works for you and your project.

What Other Software Does It Work With?

The Behringer UMC202HD is compatible with most applications. Some of the most common ones are Avid Pro Tools, Ableton Live, and Steinberg Cubase.

I recommend reading up on the following programs to avoid any difficulties and issues during setup.

Still Skeptical? Here Are Some Alternatives.

The UMC204HD is another budget audio interface from Behringer.

There isn’t much to review about the hardware from the same manufacturer, as it’s essentially made of the same metal chassis.

You can read my in-depth comparison of the two here!

As for performance, this unit can give you everything that the U-Phoria UMC202HD can and much more, BUT it also costs more.

They differ in terms of inputs. The UMC204HD has one extra pair of analog inputs. You also get 2 more (for a total of 4) real Midas mic preamps.

So, if you’re still starting out and money isn’t a concern, this unit’s a good alternative.

This device is among the best affordable interfaces capable of providing premium sound quality.

While both interfaces are the same in terms of rate of sampling, inputs, and phantom power for condenser microphones, the M-Track unit comes with two DAWs so you can record straight from the box.

On top of that, this device comes with 20 plugins for mixing!

However, the M-Audio comes in a plastic case that looks and feels cheaper than the metal box casing of the UNC202HD.

The U-Phoria UMC202HD is indeed a value-packed studio-in-a-box perfect for music, audio production and other audio recording activities!

While this audio interface is more budget-friendly than other high-end products, the features (like sampling and Midas mics) still hold their own.

Of course, this unit can’t compete with high-end interfaces, but if you’re new to sound production or are on a tight budget, I think the UMC202HD offers you good value for your money.

So what’re you waiting for?

Go ahead and buy a new Behringer audio interface to kickstart your music, gaming, or podcasting career!

You can check how it fares against Focusrite Scarlett 2i2 in my comparison guide!