Audio Interface vs Sound Card: What are the Differences? 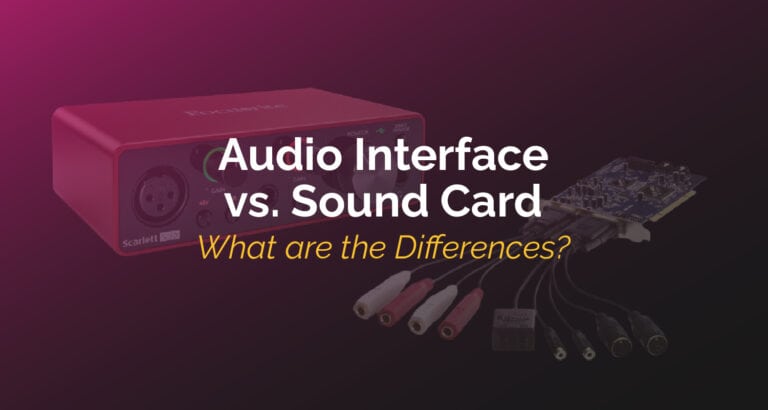 There are many choices when it comes to the music, podcast, and even news broadcasting channel that people listen to regularly.

Thanks to streaming applications and websites, playing music and playing audio production outputs have also been made easier.

This means that it’s now more important for audio production and music production industries to ensure that they are producing high-quality audio and music outputs for their audience.

Let’s dive into what audio interfaces and sound cards are, their similarities and differences, and ultimately, which one fits your nature of work or interest better.

What is an Audio Interface?

Say you’re an up-and-coming artist or podcast host, and you want to record audio that’s a lot more adaptable and customizable.

You use an XLR microphone to do so (since condenser microphones still require phantom power).

Or maybe you’re an audio engineer who considers both the recording process and the production and editing process.

To connect your device and even convert the audio signals coming from external microphones and instruments, you’ll need an AUDIO INTERFACE.

From having more input and output ports to providing volume control to all connected devices, audio interfaces don’t just make the job easier for you — it also supports your output by SUSTAINING, if not improving, the quality of your work.

How Does it Work?

There are a lot of processes that take place when you use an audio interface.

Let’s break them down, shall we?

Your microphone will then pick up sound as analog signals or voltages, which the built-in converters in your audio interface will then convert to ones and zeroes.

These ones and zeros compose the digital data that your computer can then process.

Say you want to play music or any output through an audio interface.

This would be the opposite of our example above, which means that the process will essentially just be the inverse of what we’ve already discussed.

Instead of converting analog voltages to digital signals, your audio interface will be responsible for converting any data you have that’s in digital format into analog signals.

The best part is how audio interfaces generally perform it automatically!

If you’ve tinkered with those virtual drum pads and keyboards on your phone, you may have heard of the term MIDI.

MIDI (Musical Instrument Digital Interface) is a technology standard that allows data from electronic musical instruments to be processed by computers.

Audio interfaces commonly support virtual instruments. You can connect it with your audio interface, which allows your computer to process and play live or recorded MIDI data.

Many audio interfaces have a sample rate range of 44.1 kHz to 192 kHz.

The sample rate of an audio interface defines the number of times that a sample is taken from an analog signal in one second.

You may have noticed that Hertz is used to measure the sample rate.

As Hertz is the measurement of frequency per second, using 44.1 kHz would thus collect 44.1000 samples in one second.

Though it sounds like a lot of samples for such a short amount of time, it actually isn’t!

The higher the sample rate is, the closer and better the quality of the audio is as it’s passed from the sound source, through the audio interface, and to your computer.

Now, if you’ve been in the music or audio production industry for some time, you’re probably familiar with the aliasing phenomenon.

Aliasing is the distortion or blurring of different audio signals due to analog audio signals’ reconstruction based on the samples taken.

It does not inherently stem from the reconstruction of the audio input by your computer or desktop device.

Instead, it occurs when the frequency of the sound input is HIGHER THAN HALF of the set signal rate.

Aliasing can result in added bouts of silence or your original analog inputs being reproduced an octave lower.

Simply put, through the anti-aliasing filter feature of your audio interface, you can easily avoid accidentally causing any distortions to your audio.

Bit depth defines the possible amplitude levels that an audio interface user can use while recording each sample.

For reference, 16-bit, 24-bit, and 32-bit are the three most common audio bit depths that you can use, with each depth representing different allocated values.

Simply put, the higher you set the audio interface of your audio bit depth, the more amplitude values will be recorded.

Remember, amplitude defines how soft or loud a sound is. So the more amplitude levels are being recorded, the more accurate your sound output will be.

One thing that you won’t be able to easily avoid by only using the built-in sound card of your computer is the latency.

Basically, latency indicates a delay in your headphone output or whatever device you use to listen to your audio output.

With that said, audio interfaces offer nearly (if not absolutely) ZERO LATENCY.

This feature is important, especially for those in the music production industry, because it gives the user more control over the audio quality of their output, latency-wise.

What is a Sound Card?

Like an external soundcard (audio interface), a sound card allows your computer to effectively send audio information to several (though limited) devices such as headphones and speakers.

‘Onboard’ because the sound cards are inherently designed into the device’s motherboard.

Typically, computers are built with microphone input and speaker output USB ports and jacks for alternative speaker and headphone outputs.

The newer and better sound card will have the capacity to support more input and output devices and even higher sampling rates.

Breakout boxes can also be considered a good option when upgrading one’s sound card, especially for those looking to get into multi-channel recording.

It is important to note that opting for breakout boxes would require users to connect it to a USB port before connecting it to their computers.

How Does it Work?

Now that we’ve essentially covered what a sound card is, let’s go over the things it can do.

Like a dedicated audio interface, a built-in sound card has built-in converters that can translate any audio that your connected device picks up into a digital signal.

It can also translate the prior digital audio to your output of choice such as line outputs, monitor outputs, etc.

Like audio converter features, a sound card can also give you as much control as possible regarding sample rates taken from the audio and allow you to use MIDI instruments.

For instance, imagine recording music with your chosen audio gear using your laptop’s sound card. Adjusting the number of samples taken allows you to produce higher-quality digital audio close to how it originally sounded.

Through its PCIe Interface, a sound card does not have to completely rely on its motherboard for the following processes:

Seeing as how an audio interface is deemed as an upgraded and external version of a sound card, the two are bound to have similarities, namely:

Here’s what you might want to consider when choosing between an audio interface vs. sound card:

Which One is Better to Use?

Let’s talk about when you should use either one!

Use an Audio Interface If…

An audio interface is essentially an upgraded and external sound card.

This means that an audio interface has the following additional features that give its user more control over the quality of your input and output:

With all these features in mind, we highly recommend you go for a good audio interface if it’s for more professional and advanced use.

Though you can use an external sound card for casual use, it may be overkill.

Use a Sound Card If…

Remember how audio interfaces are the more advanced version of sound cards? This essentially means a sound card is genuinely better for casual listeners.

Before you go, we’ve also covered some of your questions about the two devices.

What Is the Difference Between Audio Interface and Mixer?

Meanwhile, an audio interface is designed for recording a digital signal into separate tracks.

Do I Need an Audio Interface if I Have a Sound Card?

You only ‘need’ an audio interface if the quality of your outputs is pivotal for you.

Do You Need an Audio Interface if You Don’t Record?

Though if you want to enhance your recordings tenfold, why not?

Can an Audio Interface Replace a Sound Card?

You effectively bypass your soundcard when you use an audio interface.

Which Has Better Sound Quality?

With all that being said, we’re confident that you have all the needed information to choose between the two devices.

Remember that it all boils down to the nature of your use for it.

You don’t need an audio interface if you’re only in it for casual listening, while you might want to upgrade your sound card if you need better sound quality outputs.