Audio Interface vs DAC: Do You Need Both? 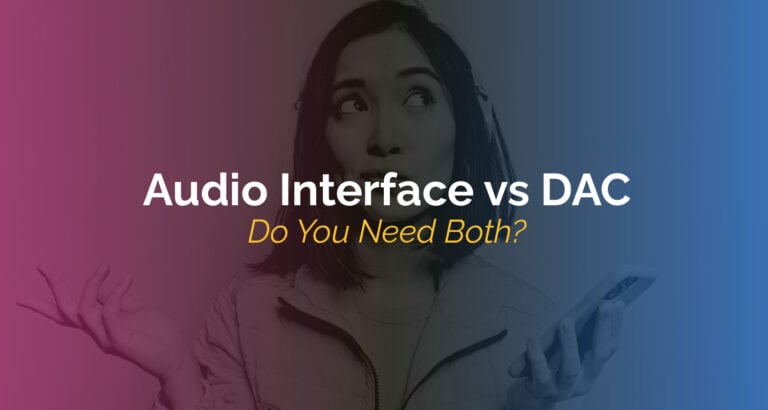 You’re probably wondering, what is the difference between an audio interface vs DAC?

Well, don’t worry because you aren’t the only one who seems confused!

When it comes to the sound production business, a very common debacle is differentiating between an audio interface vs DAC.

These two tools may seem similar; however, they actually have numerous notable differences to take into consideration.

In this article, we will provide you with vital knowledge about audio interfaces and DACs!

This shall help us answer the final question, which is if you need both of these devices.

What is an Audio Interface?

A home recording studio’s foundation is an audio interface.

This piece of equipment will handle all you need to record your music.

Audio interfaces are part of a new category of audio devices with the ability to connect to your computer, instruments, and microphone.

Most audio interfaces include a headphone amplifier.

To put it in simpler terms, audio interfaces get sound into and out of your computer.

An audio interface is required if you are looking for a better audio quality recording of your voice or any instrument and hear the results so that you can mix and master your recordings.

What is a DAC?

This might be the first time you’re even hearing of the term DAC, but digital to analog converters are surprisingly present in many of our everyday devices!

Basically, every device capable of decoding and playing audio files has a DAC file to it!

A Digital to-Analog Converter, or DAC, is a device that converts the digital signal coming out of one’s computer and transforming it into an analog audio signal.

Any digital audio equipment should come with a built-in DAC preinstalled since the analog conversion is an important process.

However, you should consider acquiring an external DAC for the following reasons:

Thus, an external DAC converts the audio signals, specifically the digital signal into an analog signal with no noise interference.

Differences of Audio Interface vs DAC

The distinction between the two is straightforward.

Listed below is a more in-depth comparison on an audio interface vs DAC.

Similarities of Audio Interface vs DAC

Both audio interfaces and DACs perform the same function in that they convert digital signals to analog signals for playback on various devices.

This section further specifies and highlights their similarities:

How Do They Work?

To gain a clearer grasp on its similarities and differences, let us break down how these two devices work.

The audio interface’s job is to take an audio signal and translate it into your computer using an Analog to Digital Converter.

With a built-in Digital Analog Converter, it is done through a reverse conversion process known as a digital to analog conversion that converts digital signals back to an analog audio signal.

However, it is important to take precautions and avoid purchasing cheap audio interfaces as these are expected to have inferior quality DACs.

Audio from your computer is also routed through the interface to your headphones and studio monitors.

Interfaces are typically connected to computers via USB cables, though some use Thunderbolt, Firewire, or even Ethernet.

Digital sounds are stored in CDs, tapes, and files.

However, they are useless if not converted to analog sound to be able to interpret it. This is where our digital to analog converter comes in handy!

Thus, it is a great way to provide an upgrade in one’s audio output!

When a computer records analog signals, it is usually displayed in the form of sound waves.

Better Understanding the Purpose of DACs

Let’s discuss the technical specifications of these two devices to better understand them and determine why you might want to consider purchasing a DAC or an audio interface.

The term “bit depth” simply refers to how much data is recorded in each sample.

Since every sample contains information, the more information within each sample means that there are more potential output values.

The amount of data transferred into audio is referred to as the bitrate, which is usually measured in “bits per second.”

Bitrate is a measure of speed in communications technology, particularly on the internet, where the rate of transfer indicates how quickly data can be downloaded.

This is the number of times per second that a sound is ‘sampled’ to generate a digital signal.

In music production, dynamic range is the difference in volume between the quietest and loudest point of an instrument or part of a song in its most basic form.

The noise floor is the lowest range of this value.

Meanwhile, sounds that exceed the dynamic range of a piece of equipment become uncomfortably loud, a phenomenon known as distortion.

Every piece of gear has some level of noise that should be taken into account during the mixing process.

Getting an external DAC or an audio interface are able to aid in this problem.

Do You Need Both of Them?

After comparing its similarities and differences, the question that prevails is whether you need both of them or would having just one suffice.

Considering everything that was said earlier, it is evident that you do not need both of them.

This is because most audio interfaces already have a DAC built into them that have great sound quality already.

Thus, you must consider which among the two would be more suitable for oneself.

To answer this question, let us further break this down and consider the following:

You should get an audio interface if…

You should get a DAC if…

There are many distinctions between an audio interface and a digital-to-audio converter because they are intended to serve different functions.

It can get really confusing really easily.

But once you know the difference, you will be able to see how they work hand-in-hand to give you the best audio quality possible!

Through understanding the purpose and how these devices work, you can now apply your newfound knowledge into selecting an audio interface or DAC that suits your needs.

We hope this article helped equip you with vital knowledge about external converters to help ease your decision process!