Apogee One vs Duet: Which Is Right For You? 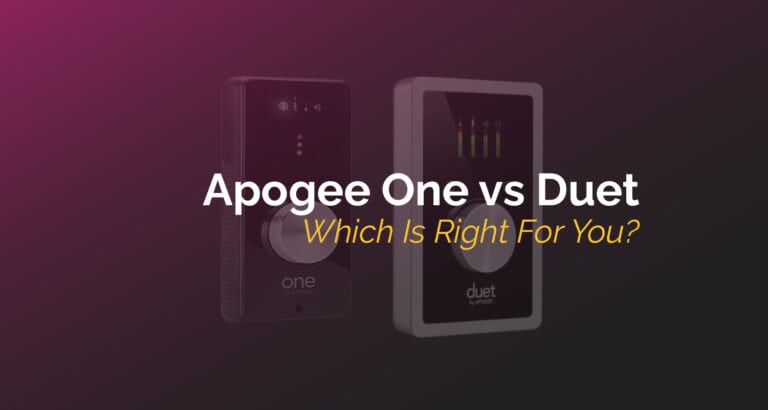 To make the right investment, you need to know the specs of the products you’re buying.

In this article, I’m going to cover one of the most important investments for your studio gear.

Which is better, and what’s the difference between the Apogee One vs Duet?

These two products may seem similar on the surface, but I’m going to examine the pros and cons to make things a little bit clearer for you.

Keep reading for a detailed breakdown of each product’s specifications, so you get the best interface for your studio and production style!

Apogee One vs Duet: The Best Portable Audio Interface

Apogee is an INDUSTRY LEADER when it comes to audio equipment.

They create professional products for their clients, but that doesn’t mean all their products will be right for you.

You should always choose according to your individual needs.

Today, I’m examining the Apogee One vs. Duet in a little more detail to help you out.

The Apogee One is the “little brother” of the Duet. The specs are lower on this model than its “big brother” — the Duet.

The Apogee Duet is the bigger, more powerful product on the market from Apogee. This interface is a professional piece of hardware for higher sound-quality recordings.

One vs. Duet: Face-to-Face Features

Now that you’re familiar with each product, it’s time to get down to the details.

The best way to choose if a product fits your needs is to look at its specifications. There’s no better way to do that than to view them side-by-side to compare them.

The Apogee One has a strong casing. Built with die-cast aluminum, it’s extra durable without sacrificing the lightweight design.

Some customers have noted that the One does seem to be a little flimsy compared to its bigger brother.

Furthermore, the Duet is also made of a metal exterior chassis for strength and durability. Weighing 499 grams, this product has some heft that makes it feel sturdier than the Apogee One.

The dimensions of the Apogee One are 12 x 6 x 2.5 cm. It’s a lightweight, pocket-sized addition to your audio equipment, perfect for content creators and beatmakers on the move.

The size difference is noticeable when you compare the interfaces side-by-side. This is a small price to pay for the power that comes with the Duet.

The increased size of the Duet might be less attractive than the smaller Apogee One for producers on the go.

The Apogee One comes with Mac connectivity cables for ease of use. This includes a USB cable, a lightning cable, and a breakout cable.

Some customers have noted that the cables are very short. This is because the One is for on-the-go musicians who use their laptops, not for producers who need long cables.

Unfortunately, a shorter cable means users may not have the ideal setup they want or need.

Meanwhile, the Apogee Duet comes with a power cable, a breakout cable, and a USB cable for connectivity.

The Apogee Duet works well both in the studio and for producers on the run.

Apogee products do not come with their own DAW, but are compatible with any DAW you currently use. This is beneficial, as it means you don’t have to set it up.

Apogee is plug-and-play with your existing DAW, including Garageband and Ableton.

Customers have reported that the setup for both the Apogee One and the Apogee Duet is seamless.

Apogee offers its own plugin from its website to improve your workstation. The ModEq6 is a powerful equalizer plugin from Apogee.

This plugin runs with the existing DAW, meaning there’s no new software you need to install, learn how to use, and come to terms with.

Here’s a list of DAW’s that the ModEq6 runs with:

The Apogee One is a Mac IOS-only product. But given that many producers use Macs for their work, this may not be that much of a problem.

Although if you do use a Windows PC, this is a frustrating aspect of the product.

While I use both, it does get frustrating for Windows-only users who hear so many good things about this product.

This is the same problem with the Duet: Mac-only compatibility. Apogee understood they were losing out with this limitation.

So they have since bought out versions of the Duet that are Windows and Mac compatible.

Due to its small size, the Apogee One has to use what little space it has in an innovative way.

The One uses an XLR and ¼ inch jack for its input. The output is a standard 3.5mm jack for headphone output or stereo speakers that you can probably use with your existing hardware.

When it comes to the input/output of the Apogee Duet, it’s the superior model. The Duet features two analog inputs and four analog outputs, allowing for more options for users.

This allows music producers to have greater uses with this interface. Among the outputs, there are 2 ¼” mono outputs to connect to speakers or outboard gear. Plus a 1/4” output for headphones.

As for the sample rate, the Apogee Duet FAR OUTPERFORMS the Apogee One.

For some producers sample rates can be a deal-breaker.

A higher sample rate allows for a richer and more dynamic depth of sound, meaning that Apogee Duet users will be less restricted in what they can record than One users.

When creating their products, Apogee understood that low latency could be an issue.

That’s why when building the Apogee One, they made sure to include the ability for low latency live monitoring.

This gives the user more precise control of the audio they’re creating and better quality control over their finished product.

The Apogee Duet also features impressive latency control. Their use of a low-latency mix allows for even more control than the Apogee One.

This makes Making the Duet a more impressive option for professionals in my opinion.

When it comes to phantom power, there’s no difference between these two products. They both offer 48V phantom power.

Due to its much larger size, the Duet has a more impressive display with an OLED high-resolution screen and a sleek, attractive display to view their input and output.

Due to the compact screen of the One, producers will only see their controls (volume, input, and output) displayed on the device.

This takes on an appearance like the built-in volume display of the Macbook.

Apogee’s strong relationship with Apple is no secret. The Apogee One comes with a USB 2.0 connection cable, meaning that you can plug in and go.

It also comes with a lightning connection, meaning you aren’t limited to using the One with a computer.

The lightning connector opens up the possibilities for on-the-go recording using your iPhone or iPad.

The Apogee Duet also features USB 2.0 connectivity. This means you can connect to a Mac with no problems.

Given the Duet’s recent compatibility with Windows products, you can connect to a Windows PC as well.

The Duet can also connect to iPhones and iPads with a lightning connector.

Furthermore, the Duet has the added benefit of being able to charge your phone when it’s connected. You can also power the Duet from the wall.

This is by no means a deal-breaking addition. But it does make a nice addition for those who use their phones and iPads for recording.

Because Apogee is a leading creator in the audio industry, there has to be something more. What sets these products apart from each other and other brands?

This makes it an excellent choice for recording on-the-go pieces of music. This makes it easier to position it on a mic stand to capture the perfect sound.

The Apogee Duet has some features that the Apogee One lacks. Due to its larger size and ins and outs, the Duet is an attractive choice for professionals.

On top of that, the One only records in mono, while the Duet makes up for this with its stereo input.

READ MORE: Apogee Groove vs Dragonfly: Which Should You Buy?

Conclusion: Which Is The Best For You?

Everyone will have a different preference, which is why there’s such a wide array of hardware on the market.

Here are the points I’d keep in mind if you’re looking to buy either of these two audio interfaces.

If you’re someone who’s considering lighter-duty work, the Apogee One is a fine piece of equipment to use.

The One has an impressive amount of power behind it for something so small. It’s perfect for students, hobbyists, or those starting out.

In my opinion, the Duet is the better, more well-rounded option, particularly for PROFESSIONALS who hold their work to a higher standard.

The Duet is the obvious choice due to the increased power behind it.

As the names suggest, the One only records in mono, while the Duet has a more impressive stereo recording.

For professionals seeking that rich depth of sound, the Duet is the right choice.