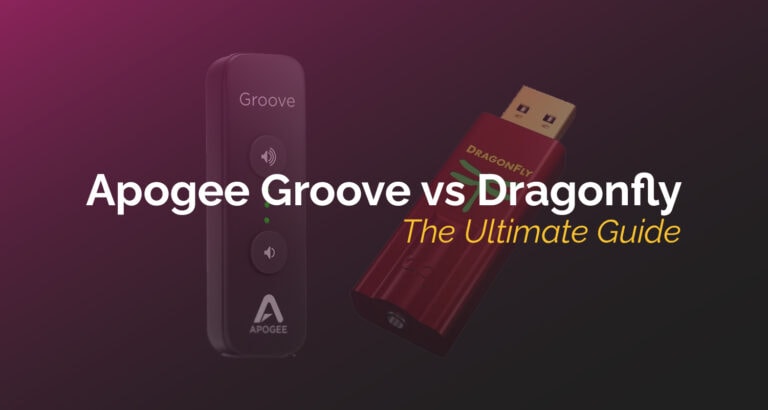 When looking at Apogee Groove vs Dragonfly, our number 1 pick is the Groove. But let’s take an in-depth look at the features of each to see what would work best for your setup.

Apogee is one of the best-known brands in the audio interface industry. Hip Hop producers and dance artists use Apogee products to create some of their best music.

The Groove is a steal for the price, and anything you hook up to it sounds a lot better.

Small and compact, the Groove comes in black. It has two buttons at the top for controlling volume and an input and output jack at the tips.

That’s about it. It’s a classic, clean design, although it doesn’t stand out as the funkiest around.

The Groove audio quality reveals every detail without having to hit max volume, so you get the most out of the playlist.

Get a fuller audio picture of whatever track you’re listening to by opening up the dynamics and defining details. The Groove is great at pushing high-impedance headphones like the Sennheiser HD600s.

People love that the Groove is plug-and-play and super easy to install.

A common review is that it brings out dynamics and clarity on a level that you’d expect from a much more expensive amp.

The Groove is USB-powered, and that brings a limit to the volume levels. That’s pretty much the only potential downside we can see. That is if you’re looking for something massive enough to blow your eardrums out, so to speak.

Other than that, the Groove is an exceptional headphone amp/DAC. It offers the same sound quality and more value as some of the plug-in-the-wall models for a fraction of the price.

The Dragonfly red from AudioQuest is a direct competitor to the Groove. They provide a decent yet affordable headphone amp/DAC. The main physical difference is that it doesn’t use jacks, but rather connects like a pen drive.

This is one aspect where the Dragonfly beats the Groove. It has a shiny, metallic finish that catches the eye in a loud yet elegant way. But because it’s a pen drive, you can only connect it to your player via USB. There are no cable options.

There are three versions of the Dragonfly red, black, and cobalt. Cobalt is the latest and most advanced version. They have made some improvements in the volume and DAC functionality. To be honest you likely won’t hear that much of a difference unless you’re a true audiophile.

And since the Dragonfly lives attached to a player, it has no onboard controls. You’ve got to do everything through the player itself. We didn’t like this too much, but if you’re going to be using it with your laptop, that doesn’t matter too much.

The Dragonfly will give you a much better audio quality than a setup without a headphone amp/DAC. The AudioQuest does improve the sound quality, and more audio detail shows through. But it still falls short of the Groove.

The sound is more three-dimensional than what you’d get without an amp/DAC, and definitely has texture. Where the Dragonfly does shine is its bass extension.

Lower notes come out with a noticeable weight without sacrificing the sound quality.

So if you’re into beats with a lot of bass notes, the Dragonfly red will give you a fuller audio picture on the lower end. But, the Groove is a better all-rounder and does better with high impedance headphones.

People like the Dragonfly for its cool looks and easy plug-and-play installation. You can use it with laptops, but it’s possible to connect it to your phone, too, using a USB OTG cable.

The Dragonfly logo changes color according to the sample rate of the file. Green for 44.1kHZ, blue for 48kHz, amber for 88.2kHz, and amber for 96kHz.

The Dragonfly is nice with the lower-end notes and improves sound quality over a no-headphone amp/DAC setup.

Both are good headphone amp/DAC devices in their own right. But in our opinion, the Groove is the better option in most situations.

Let’s take a look at the features and specs for a head-to-head comparison.

You don’t need to fork out hundreds of bucks on a plug-in-the-wall amplifier right off the bat. But your headphone amp/DAC needs to be good if you’re going to record and produce with great sound quality.

Both products are closely priced. No clear winner.

When it comes to physical dimensions, both devices are small enough to fit in a pocket and are easy to carry around. But here, the Dragonfly beats the Apogee Groove by a fair margin.

The Dragonfly is almost 1.5 inches shorter than the Groove and is also slimmer. It has a nice, sleek feel and is super portable. The Groove is far from bulky but still easy enough to carry around.

If size matters, then the Dragonfly is much smaller and niftier.

Here the hands-down winner is Dragonfly.

From the dimensions of the two devices, it’s not hard to guess, which is lighter. The Dragonfly weighs in at only 0.77 oz, making this one of the lightest headphone amplifiers or DACs on the market.

Apogee’s Groove weighs more than double that, coming in at 1.6oz. That is still within the comfort zone for a portable device, no questions there. And it may not matter much to some, but if it can be that much smaller without sacrificing on audio quality, so much the better.

The Apogee Groove comes with two buttons, one each at the top and bottom of the device, to control volume, and that’s it. Whatever else you want to do, you’ve got to do it through your player. But being able to access the volume is definitely a nice touch.

The Dragonfly doesn’t come with any controls on the device itself whatsoever. The only way you’re going to access anything, including volume, is through your player.

The Apogee Groove takes this one.

Headphone amps with high impedance are a must if you are serious about audio, but they come with a big price tag.

Apogee’s Groove works with a mid-impedance headphone amplifier like BeyerDynamic DT 77 Pro. It will even give more than decent results with high impedance ones like Sennheiser’s HD 600.

The Dragonfly will work well, but nowhere near the level of the Groove. Using the Dragonfly on a higher impedance headphone amplifier, volume seems to replace a lot of the detail and clarity of the audio itself.

The Dragonfly does have some texture, but it loses a lot of things that the Groove would pick up. The most clipping and distortion happens on the Dragonfly with lossless files at mid-hi volume.

The winner when it comes to impedance is definitely Apogee’s Groove.

Having an external DAC gives much better sound quality than using your player on its own. Using a DAC is a great way to improve your listening quality without spending a fortune.

The Apogee Groove has an ESS Sabre32 32-bit hyper stream DAC that features the time domain jitter eliminator. This means it gives it a great dynamic range and ultra-low distortions. Providing excellent audio clarity and doesn’t suffer from input jitter.

Each Dragonfly version has a different DAC chip. The Dragonfly Black has an ESS s9010, while the Red comes with an ESS s9016. There is a minor sound quality difference between the two, but it’s exactly that, minor. Both have a minimum-phase fast roll-off filter.

The cobalt comes with a better quality DAC, the ESS s9038Q2M. Unlike the DACs in the other two models, this one comes with a minimum-phase fast roll-off filter. This creates a more natural sound with less fuzz.

Groove’s DAC performs much better than Dragonfly’s black and red versions. The difference between Groove and Dragonfly’s flagship version, cobalt, is less pronounced, but it is still there.

The Apogee Groove wins this one.

In simple terms, the lower the bit depth, the less audio data and the less accurate the recreated sound is.

Where you see the bit depth coming into action is the dynamic range of the signal. 24-bit digital audio allows for bigger dB ranges than 16-bit audio.

Both Groove and Dragonfly can handle 24-bit digital audio, so in that respect, they are the same. But then Groove can handle 117dB, while the Dragonfly can only give you 65dB. The Groove has a much better dynamic range.

The Apogee Groove may not have the fancy logo light-up, but it goes all the way up to 192kHz. And if you’re into recording or producing sound, you’re going to want to be at the top.

Apogee takes this category too.

The Apogee Groove and Dragonfly are both good-quality yet affordable headphone-amp DACs. But one may be better than the other for you, depending on your needs.

Use Apogee Groove If…

RELATED: Apogee One vs Duet: Which is Better for Professionals?