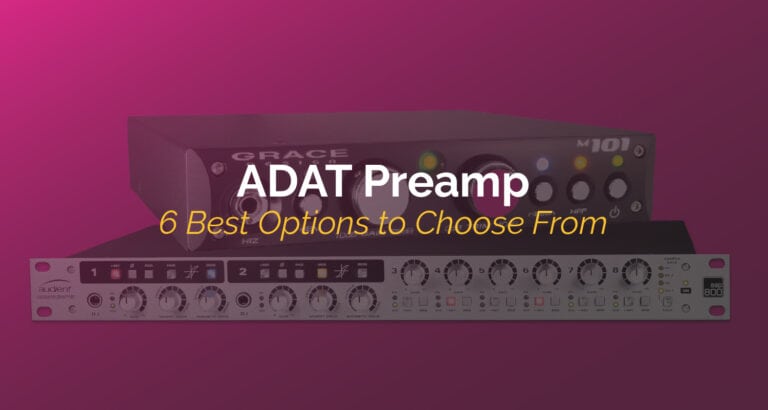 There is always a time that comes for us all; when the mic preamps of our audio interface no longer do the job.

There could be two reasons why:

But whatever the reason is in your case, we’ve got you covered!

We’re going to share with you everything there is to know about ADAT preamps, with your choices being:

6 Best ADAT Preamps to Check Out!

We’ll share some of the best on-the-budget, high-end, and single-channel Alesis digital audio tapes that could help you search for the best one.

We assure you that all products on this list are reliable regarding price, record quality, and even your computer.

When we hear the name Audient, the first thing we think of is great quality, clean recordings!

The Audient ASP800 is an 8-channel preamp that can be used as a standalone or cost-effective expander for the compact USB and Alesis digital audio tape interfaces.

It also builds on the design of the company’s retired ASP008 in packaging its ASP8024 console’s mic preamps into a standalone box.

They are each capable of receiving mic or line inputs, with channels 1 and 2 also offering optional JFET DIs.

This Grace Design M101 is one of the few pre-amplifiers they make that’s significantly cheaper than the rest!

Besides its pristine sound, one notable feature of this preamp is its unique “ribbon mode,” specifically tailored to protect your fragile ribbon mics and allow them to perform at their best.

The Grace Design does not really add more channels because they’re mainly useful for microphones, despite both instrument and microphone functionality.

You can use it with anything, but don’t expect any voodoo with electric guitars.

Basses, acoustic guitar with piezo pickups, and keyboards will do just fine! It’s also really handy for those who need a preamp for their analog synth keyboards.

The Behringer ADA8200 is the IDEAL 8-channel for anyone on a tight budget that needs an expansion slot for their input count.

It has an eight-channel analog output and can also be connected to an audio configuration via the optical ADAT interface.

The analog inputs and the associated controls largely take up the front. Each channel has:

The processing is perfectly fine! The plastic caps of the potentiometers are not particularly nice to look at, but at least they cannot be easily pulled out of their base.

The minor drawback is a slight HF droop, but this converts into a smoother and more classy-sounding overall tone.

The Focusrite Clarett OctoPre is the great extension you need for your recording input necessities.

The layout of the Focusrite OctoPre is a front-panel input on combination XLR/TRS jack connectors to its first two channels and similar rear-panel inputs to the remaining six.

Two switches of this Focusrite are adjacent to these connectors that route the phantom power to all eight XLR mic-level inputs in two banks of four.

The TRS inputs can accept balanced or unbalanced optical cables. A further pair of switches can be engaged to configure the jack inputs on channels 1 and 2 as instrument inputs.

Plus, 8 rotary controls with an overload LED set the channel’s gains.

A drawback is that the phantom power cannot be switched per channel but only in groups of four channels.

The TubeOpto 8 gives you eight channels of discrete Class A valve mic amps, each with XLR and quarter-inch jack inputs and up to 64dB.

These feed the built-in A/D converters, connecting to the outside world via an optical output of eight channels.

Interface channels 1 and 2 also have front panel quarter-inch high-impedance instrument inputs so guitars and basses can be easily connected and recorded.

In addition to the instrument inputs and vintage vibe, it also features:

These operate on both the line and mic music. Two phantom power buttons enable channels one to four and five to eight accordingly.

Although this is perhaps done to save space, to see phantom switched individually on channels may dictate an illogical mic patch.

The unit also prevents using a ribbon microphone or two in a mostly condenser setup.

Some drawbacks would be:

You can expect the preamps to perform well when you record instruments like guitars for its price.

The 8-channel RME OctaMic XTC stands out from all the preamps on this list because it is a digitally controlled microphone preamplifier.

The RME unit can be remotely controlled via MADI, USB, or MIDI using the RME MIDI remote app.

RME has an extremely versatile interface that can be linked up to 8 units, giving you a whopping total of 64 additional channels within its budget price!

The USB 2.0 connector is added largely to facilitate firmware updates rather than to transform the device into a complete audio configuration.

It is patched freely to any digital outputs, making extremely flexible signal routing and format conversion.

What Is a Preamp?

The main goal of a preamp is to cleanly raise the volume of a mic-level signal.

A preamp also amplifies low signals to line-level inputs. It converts it to a standard operating level of your recording gear.

The preamps are the first pitstop for an audio signal before it travels through the amplifier and into your speakers.

In a home theater, the preamps perform two main functions:

In other words, a weak electrical signal becomes strong enough for additional processing, preventing noise and offering a clearer output.

You don’t need a dedicated preamplifier if you have an AV receiver with an integrated preamp.

Many home theatre enthusiasts prefer a separate setup with a preamp and amplifier because it can deliver richer, fuller sound with minimal distortion.

If you have no idea what that little port on the back of your audio configuration labeled “ADAT In” or “Optical In” does, this part will tell you all about it.

It is an optical audio protocol designed to transfer digital audio to and from two audio devices.

An ADAT can transport 8 uncompressed digital audio channels to and from an interface and peripheral device with just one Toslink cable.

It also means that you can expand the number of inputs on your audio configuration by hooking it up to an external device!

It is short for Alesis Digital Audio Tape.

It allows an easier expansion of the info count of your recording equipment.

ADAT outputs are also generally used to send signals out of your audio interfaces to other equipment, such as a headphone distribution system, D/A converters, etc.

Even though it can increase your eight-channel count and outputs, it will mainly rely on the audio quality that’s being transferred.

Ideally, the higher the audio resolution, the lower the ADAT channel counts.

What are ADAT preamps?

These preamps are designed to let you EXPAND the input count of your recording equipment.

It expands by providing 8 channel inputs to connect your microphones and other recording devices.

These signals are sent out via output and sorted by the audio interface’s ADAT Input, expanding your total number of channels to 8.

How Does ADAT Work?

It is an optical audio protocol designed to transfer digital audio to and from two audio/instrument inputs.

It is similar to compressors that transport 8-channel uncompressed digital audio to and from an interface.

They are used for word clock information, though it is not necessary to use word clock connections.

Consider an ADAT lightpipe as an expander that features higher-quality record equipment to control and create balanced outputs in the studio.

The rule of thumb is to use the unit that has the most accurate clock as your clock master.

How Do I Use ADAT Inputs?

A connection with an ADAT input can accept an ADAT expansion unit with up to 8 channels.

It will work as long as your current interface has a standalone mode (no computer connection required to run) and you have a computer capable of connecting to it to adjust its settings.

With a USB 2.0 connection, you can put it to work as an ADAT expansion with a more modern audio interface as the host.

If you record higher resolution outputs, like 24bit and 96kHz, you’ll need to make sure your ADAT extension unit features Sample Multiplexing (S/MUX).

However, it might be limited by the Alesis Digital Audio Tape format and reduce the line of input to 4.

How Do I Use ADAT in Pro Tools?

The procedure for using the Alesis Digital Audio Tapes with an app or Pro Tools are all similar.

In conclusion, it could be ideal for you to get 8-channel ADATS for the point of being supplied with higher-quality studio equipment.

We wouldn’t ask you to stick with any of these ADATS if they aren’t what you prefer; whether you want more balanced outputs or not, need an 8-channel audio interface or just more channels.

Your art of music will depend on your creativity and taste!

We hope this post helps you search for the right preamps that will be able to expand your channels and come up with balanced outputs.